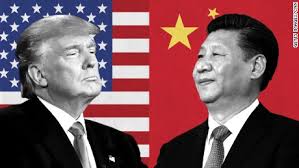 The United States is raising tariffs on products imported from China, which has responded by increasing its tariffs on imports from the United States. In the midst of this trade war that is already having consequences, the international market is left with the increasingly likely possibility of a recession and the resulting tremors that cause uneasiness about the future of the world economy.

The history of this so-called trade war began as soon as Donald Trump became president of the world’s biggest economic power. Since then, he has heralded the resurgence of nationalism under the banner of “America First” and established a pugnacious, defiant attitude toward China, Europe and any country that, like Mexico, presents a positive balance in its commercial relations with the United States.

Today, President Trump has shown that his speeches were not just rhetoric. His most recent action, punishment, according to him, for China’s abusive bilateral relations, will mean a tariff on $300 billion of goods produced in China (in total, almost all), set to take effect on Sept. 1 and Dec. 15.

China announced its response yesterday when its authorities declared tariffs on thousands of U.S. products worth $75 billion, and they will become effective on the same dates announced by the United States president. It is an eye for an eye that threatens to reverse decades of efforts to build the globalization of trade and the exchange of goods and services among all nations of the world in an effort to overcome political and ideological barriers.

So, the stock market trembles and people in economic circles begin talking about recession, a hypothesis that the chairman of the Federal Reserve has already referred to as a possibility. And the world markets show indications that, they, like oil, are going downhill, while the dollar strengthens as a refuge for investors fleeing risk.

All this is influenced by the presidential campaign in which President Trump seeks reelection using aggressive nationalism, which China responds to with the same medicine. Trump’s threats have unleashed nervousness among the vast majority of nations that defend trade integration, with its imperfections and risks, as the most effective vehicle for growth.

The world is waiting. Next week will be crucial in finding out how far the clash of two of the world’s biggest economic powers in recent decades will go. On Sept. 1, when the announced tariffs come into effect, it will become clear whether the damage that everyone fears will occur, or if, as expected, there will be some reconsideration and the war that does not seem to make sense today will be resolved.