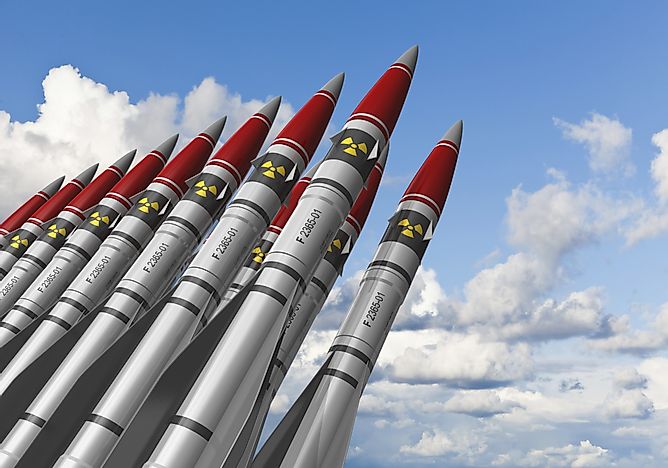 Stung by Kim Jong Un statements last year, Donald Trump claimed to have a bigger nuclear button than that of the North Korean dictator. Now, we have just seen a similar exchange between the presidents of the United States and Russia.

Last week, an explosion killed five people at a base in the Russian Far North while Moscow was testing “new” nuclear weapons. Trump immediately flexed his muscles on his favorite social networking site. “We have a similar, though more advanced, technology,” tweeted the president.

A retort was given in the same tone. Vladimir Putin believes it is Russia that is, in this regard, “considerably far ahead” of other nations, said a spokesman for the Kremlin.

In a way, this exchange resembles a new “War of the Buttons” (a French novel by Louis Pergaud). But it is anything but funny. In fact, it is sinister considering the danger posed by nuclear weapons.

If you still have doubts as to whether the nuclear arms race has been revived, it is unfortunately time to sweep them away.

It is important to remember that these exchanges between the United States and Russia take place in the wake of the death of the Intermediate-Range Nuclear Forces Treaty in early August. This fundamental agreement, signed by Ronald Reagan and Mikhail Gorbachev in 1987, banned the use and forced the dismantling of a series of intermediate-range nuclear missiles (with ranges of 500 km to 5,500 km, approximately 310 miles to 3,418 miles).

The Americans accused Russia of violating the treaty, but in all likelihood the Trump administration was pleased to be able to use this pretext to torpedo an agreement that it found cumbersome. Moreover, there is every indication that Washington will not renew the New START Treaty for the Reduction and Limitation of Strategic Offensive Arms, which will expire in 2021.

“This is undoubtedly the most dangerous period since the end of the Cold War and one of the most dangerous of the nuclear era,” said American expert Joe Cirincione, contacted by phone in Washington. He said that if the New START treaty is not renewed, it will be “the first time since 1972 that there are no longer any restrictions on U.S. and Russian nuclear weapons.”*

The nuclear power struggle between Washington and Moscow is not the only cause for alarm. Other countries that possess or covet nuclear weapons also represent potential threats. The North Korean crisis, for example, is far from resolved, whatever Trump may think. As for the issue of Iran, a country whose nuclear ambitions were kept in check by the agreement negotiated under Barack Obama, those ambitions have now been renewed since the White House announced its unilateral withdrawal from the agreement in May 2018. Not to mention the increasingly worrisome tensions between India and Pakistan, two countries that also possess nuclear weapons.

The rivalry and one-upmanship between nuclear states and, consequently, the decline in the control and reduction of weapons should provoke an outcry! Yet, they hardly make waves in the international community.

For example, American allies in NATO seem to have decided that they don’t want to alarm the American president. And that includes Canada.

The inertia of governments can also be explained by the “demobilization of public opinion” since the end of the Cold War, points out University of Montreal Professor Michel Fortmann in a short, illuminating book titled “Le Retour du Risque Nucléaire” (“The Return of the Nuclear Risk” – in bookshops next month).

In this book, after rightly stressing the destructive power of nuclear weapons and the atrocities to which the world could be exposed, he demonstrates how important it is to reduce and limit weaponry for “greater stability in strategic relationships among the nuclear powers.”

Like many experts on nuclear issues, Fortmann also seems troubled by recent developments that clearly prove we have forgotten the lessons of the Cold War – and of narrowly avoided nuclear confrontations.

Just because nuclear weapons have not been used since 1945 doesn’t mean that they will not be used in the future, the professor reminds us bluntly. Without being alarmist, it is important to note that the enthusiasm shown by several major powers for the modernization and development of their nuclear weapons does not bode well for the future. This race must be slowed down as quickly as possible.

The Trump era will not last forever. However, it is certain that his successors will not be able to quickly repair all the damage done by this pyromaniac president.

About Anindita Jaggi 27 Articles
I'm an ESL teacher from Australia. I am interested in translating, linguistics and anything language-related! Apart from English, I speak Hindi, French and a bit of Spanish.