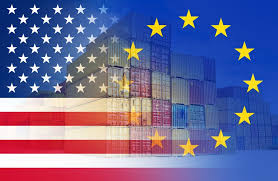 America is being allowed to impose tariffs on $7.5 billion worth of European export products as compensation for illegal European state support of aircraft manufacturer Airbus. Does this settle an ordinary trade dispute or is it the opening shot of a trade war like the one between the U.S. and China?

The list of American sanctions includes airplanes, French wines, Spanish olives, Scottish whiskey, German tools and Dutch cheeses, although it is not yet clear precisely which cheeses. Except for the airplanes, this list looks like an effort to bully Europe, impacting products which Europeans are proud of, with the French, Spanish, Brits and Germans coming first. Those countries are responsible for years of illegal state support of aircraft builder Airbus, which caused competitor Boeing to lose billions in earnings.

But the magnitude of the sanctions package is more than a pinprick. Sanctions concern a total of $7.5 billion (approximately $6.9 billion euro) worth of European products. Even more severe is the fact that sanctions on the European automotive industry also loom overhead, and that President Donald Trump holds many more grievances over the trade relations with Europe. The EU is also threatening retaliation, and Trump is not known for his ability for deescalation. It has not yet gone this far, but the words ‘trade war’ are hanging over trans-Atlantic relations like a storm cloud.

The next few weeks will show how hard a stance America will take, with the World Trade Organization’s ruling in hand. The U.S. has compiled a list of European products that represent annual exports worth $7.5 billion to the U.S. For now, Washington is holding back. It has announced trade tariffs of 10% on aircraft and 25% on the other 162 products. But the U.S. has the right to increase those tariffs to 100% at any moment, and is threatening to do so.

Moreover, the U.S. has recently stated that it can change the list of sanctioned products at any given moment. According to the financial press agency Bloomberg, Washington is considering using an extremely damaging weapon known as carousel retaliation.

That is a process in which the size of sanctions does not have to change, but the U.S. can regularly change the list of affected product without warning. As a result, no producer who exports to the U.S. will know what to expect. At any moment, a producer’s product could suddenly be subject to sanctions, creating an extra layer of insecurity.

The tariffs mean that affected products will become more expensive for the American consumer, who will therefore be more likely to buy Californian wine instead of wine from France, Jack Daniel’s instead of Glenfiddich, a Chevrolet instead of a BMW, Black & Decker tools instead of Bosch products.

Reciprocal sanctions increase product prices on both sides of the ocean. That leads to less trade, insecurity about the future and hindered investment, which will slow economic growth. If those mechanisms are allowed to operate long enough, it will ultimately lead to a recession.

And that possibility is already lurking: growth in Europe slowed to 0.2% in the second quarter of 2019 and last month, the Organization for Economic Cooperation and Development warned that worldwide economic growth this year threatens to be lower than in the last 10 years. The main reason? The trade conflict between the U.S. and China. The amounts concerned in China are many times higher than the annual tariffs the U.S. has announced on $7.5 billion worth of European products. The U.S. has now sanctioned $550 billion of Chinese products. In response, China has imposed sanctions on $185 billion worth of U.S. products.

The E.U. is conducting a twin-track strategy. On the one hand, it is insisting on a peaceful solution where the parties return to the negotiating table. By reaching a new trade agreement, in which all disputes and sanctions could be dismissed, Brussels hopes that everyone, from American and European aircraft manufacturers to Spanish olive growers and American whiskey importers,- can get back to business. “The mutual imposition of countermeasures, however, would only inflict damage on businesses and citizens on both sides of the Atlantic,” according to Cecilia Malmström, the EU commissioner for trade.

At the same time, Brussels is threatening to retaliate. “We will not be naive. Whoever starts a trade war will end badly in his own camp,” said Jean-Claude Juncker, president of the European Commission.

Ireland’s Phil Hogan, whose appointment as trade commissioner takes effect on Nov. 1, is warning the U.S. that “They’re going to have to deal with the issue if it goes badly wrong for them on Boeing.”

Hogan was referring to the complaint the EU has filed in turn on charges that America provided support to aircraft manufacturer Boeing. The WTO has declared that complaint to be only partially supported, and the EU will not know how much Brussels will be allowed to impose in sanctions on the U.S. until next spring. But it will surely not be $7.5 billion.

One can only hope that Malmström’s invitation for a peaceful solution will not be ignored, because, if a vicious circle of action and retaliation truly materializes between the EU and the U.S., then the Netherlands will also wish it were October 2019, when only a bit of cheese and sausage was concerned.