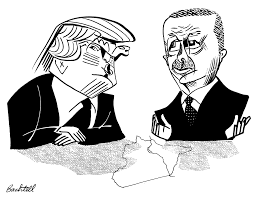 What we had been expecting for more than a year has happened. The Turkish army, with the help of the paramilitary formation of local Turkmen and outspoken jihadis, has begun to push the Kurds away from their land. Candidly speaking, Recep Tayyip Erdogan warned all concerned parties for a long time that he was planning a Turkish military invasion in Syria. And no one did anything. Nobody took any action, except for verbal declarations and statements from the relevant foreign ministries.

On Sept. 16, the Turkish and Russian heads of state met in Istanbul. They agreed to cooperate in Syria. Vladimir Putin and Erdogan committed to the future of the TurkStream gas pipeline. The Turks winked at the Russians at the MAKS International Aviation and Space Show. Erdogan showed interest in eventually buying the Su-35 combat aircraft, and the Su-57, why not, when it begins regular service. Despite the sanctions imposed by the U.S. on Russia, Turkey, as a North Atlantic Treaty Organization member, bought the S-400 complex. All these facts indicate that Ankara has one foot out of NATO.

What should the U.S. president do? Turkey is a key member of NATO. Its army is one of the most robust in the alliance. Kurds and Turks have been included in the balance: who carries more weight in geostrategic terms? Possibly, the Turks. That’s why Donald Trump decided to hand over the Syrian Kurds and ordered the U.S. military to retreat from Manbij. The U.S. president seeks to return Ankara to Washington’s orbit. I’m saying Washington, not NATO, because NATO is equivalent to the United States. The rest of the alliance members play the role of the Nepalese Gurkhas in service of the British crown. Let’s not forget! Turkey is a key country in the Pentagon’s strategy against Russia and China. For a long time, Ankara has supported its Muslim brothers, the Uighurs of Xinjiang, who have been a real headache for Beijing. It is for this reason that the Chinese Belt and Road Initiative has begun to bypass Turkish territory and focus on Greece. The fact that it is bypassing Bulgaria is another story. Turkey’s withdrawal from NATO will wash away the organization like a sand castle. Washington will lose its strategic military cover against the Russian Federation.

Moscow also faces an extremely complex equation. The U.S. has placed the Kurdistan Workers’ Party, known as the PKK, on the list of terrorists. But the U.S. is using the Syrian Kurds from Rojava as allies. The portraits of Abdullah Ocalan and PKK flags are hanging in the Kurdish administration offices in Syrian Kurdistan. Despite the conventional labels placed on the key players in Northern Syria, we cannot help but notice the blatant hypocrisy of how the Americans have treated the Kurds. But, as Russian experts said on Russia-1 TV in a program about Vladimir Solovyov, “The USSR also betrayed the Armenians many years ago in order to preserve its relations with Turkey at the start of the 20th century.” In the famous Taksim Square in Istanbul, a monument to Kliment Voroshilov and Mikhail Frunze was erected pursuant to Kemal Ataturk’s personal instructions. The monument was unveiled in August 1928, during the time of the Armenian genocide. By the way, most Armenians were killed by Turkish Kurds living in the villages.

In addition, today the Syrian Kurds do not allow Russian engineers near the oil fields in northeastern Syria, where 80% of the country’s oil fields are located. In short, Moscow and Washington’s attitude toward Syria is what we call geopolitics. Today’s tragedy in Syria was created by American neocons in 2011. That’s when the Pentagon executed the Donald Rumsfeld-U.S. Navy Vice Adm. Arthur Cebrowski strategy, which, simply put, involved the mass destruction of countries in the Middle East through the “Arab Spring” project and the chaos that it spread. Then, as now, the U.S. presence in Syria was illegal. Only Russians and Iranians have been officially invited by the Damascus government. But who cares about international law in our time?! In international politics today, the rule that “you can or you can’t” applies. And Erdogan has decided that he can.

The Russians are also not happy about the invasion of Rojava by Turkish troops. The Kurds themselves are unable to protect the oil fields around Deir ez-Zur in Northern Syria on their own. And the oil fields are their main source of income with which they support their Rojava administration.

Iran also has its own interests in Northern Syria. The Iranians would be happy to have the Americans pushed out of Eastern Syria, where an American military base is stationed in al-Tanf. To ensure this, Tehran has begun to conduct military exercises near the Turkish border.

Some French experts believe that the Kurds should reach an agreement with the Turks, Iranians and Syrians. They would need to reserve some autonomy, but they would need to do so without the participation of the United States and Israel. It’s a complex, almost unattainable task. While the Kurds continue to play games with Washington and Tel Aviv, they cannot achieve their goals, especially given the constantly changing geopolitical climate in the Middle East. Some time ago, Trump said that back in 2011, the U.S. had entered Syria for about 30 days. This was at a time when Secretary of State Hillary Clinton and Victoria Nuland were in charge of America. But the U.S. has plunged deeper into a war without a clearly defined goal. The U.S. president stressed that the Kurds had cooperated with the U.S. and received significant financial resources and weapons worth billions of dollars. According to Trump, the Kurds have been fighting the Turks for decades, and it’s time for the U.S. to get out of these endless wars, most of which are tribal.

Finally, it is unlikely that Erdogan will restore the Ottoman Empire with his military action in Syria. The Kurds got involved in the Syrian conflict on their own. They chose their allies, and they became an instrument of American geostrategic policy. Damascus has offered to send troops to Rojava, but the Kurds have refused. The Russians suggested sending their military police to the Kurds in Rojava, and the Kurds began to negotiate. Moscow and Damascus proposed the option of providing broad Kurdish autonomy, but the Kurds believed the American promise of a “Great Kurdistan.”

You have to be very naive to believe that Erdogan is a self-sufficient entity, and that the decision about operation “Peace Spring” in Syria was made independently in Ankara. When the Kurds were ready to raise the Syrian and Russian flags, the Americans quickly changed their command. Thus, the Kurds became an American proxy who lost in the great geopolitical game.