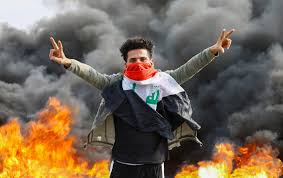 Referring to an announcement from the official spokesman for the commander in chief of the Iraqi Armed Forces, Maj. Gen. Abdul-Karim Khalaf, the Iraqi news site Baghdad al-Youm reported that in June, Baghdad and Washington intend to discuss a concrete schedule for a full withdrawal of American troops from Iraqi territory.

At first, many experts took this information with a grain of salt. This is because at the beginning of January, Khalaf made a similar announcement that was seemingly confirmed by the Western press, which published a letter from the press service of the U.S.-led international anti-terrorism coalition. In the letter it was stated that “in due deference to the sovereignty of the Republic of Iraq […] CJTF-OIR* will be repositioning forces over the course of the coming days and weeks to prepare for onward movement,” and “the international coalition against ISIS’ activity in Iraq is planned to be limited to consultations and the supply of weapons.”** What was interesting was the fact that the American military didn’t dispute this information. The chairman of the Joint Chiefs of Staff, Gen. Mark Milley, commented that the document appearing in the press “was a mistake” and that “the letter [was] a draft.” Conversely, Defense Secretary Mark T. Esper made it clear that nobody knew anything about the letter.

People bought this. This is because, after Iranian Gen. Qassem Soleimani was killed as a result of a U.S. airstrike on the outskirts of Baghdad, and the Iraqi parliament voted in favor of removing foreign military forces from the country at an emergency meeting, President Donald Trump threatened Baghdad with sanctions. He said, “We have a very extraordinarily expensive air base that’s there. It cost billions of dollars to build. We’re not leaving unless they pay us back for it. Moreover, Secretary of State Mike Pompeo stated that if the Americans pull their troops out of Iraq, Tehran’s zone of influence in the Middle East would widen significantly. But this time, everything’s different. Pompeo has confirmed that Washington has proposed a “strategic dialogue” with Baghdad in June. The agenda is unknown except for one item: the importance of cooperation between the U.S. and Iraq “to stop any reversal of the gains [they] have made in [their] efforts to defeat ISIS.” This is indirect confirmation of Khalaf’s words regarding active preparation for the withdrawal of the 5,000-strong American military contingent from Iraq.

There is also another point to bring up. Previously, the United States special representative for Syria engagement, James Jeffrey, who is, by all accounts, dedicated to Trump’s plans for the Middle East, while knowing about the preparations for the withdrawal of American troops from Iraq, suggested that during the dialogue with Baghdad, the White House should not only solve the Iraq problem, but also “cover the entire gamut of [the] relationship … which is far greater than just [the Americans’] forces there … It’s the long-term reequipping of the Iraqi military forces. It’s the regional agenda. It’s our diplomatic support of Iraq.” He also believes that the configuration of the security system in the region might change. In the American vision, of course. It turns out that the coronavirus pandemic is not the reason for the withdrawal of American troops from Iraq; it has only expedited the decision. Baghdad will remain the epicenter of conflicting regional issues, which, in many ways, reminds us of what is happening in Afghanistan right now. However, the role of the Taliban in Iraq could be fulfilled by Islamic State group fighters, who, as many American experts believe, are being “indirectly supervised by the U.S.”

In a regular Sunday bulletin circulated among believers, the Islamic State group described the pandemic as “painful retribution” from God that has been sent to the Christians. They also write that fear of the virus is worse than the virus itself, and that it “has brought the Western world to the brink of unprecedented transformation.” Besides this, strengthening the role of neighboring Iran in Iraq could potentially be a drawn out process. Considering that Tehran sits between Iraq and Afghanistan, is adjacent to Syria and is engaged in military action in this country, the whole region will be pulled into a new war. With specific regard to Iraq, against the background of intensifying Shiite-Sunni conflict, Iraqi Kurdistan could be moved toward trying to secure independence. One way or another, other countries in the region, such as Turkey and Saudi Arabia, will be drawn in over the course of events. Israel also won’t be left out.

Or will the Middle East be left to itself and a historic matrix begin to reestablish itself there? That is also something that won’t be painless. For the time being, as Foreign Policy believes, the “withdrawal of troops from Iraq is not a trade-off for the U.S., but an entry into a tough new game of transit in the region.” However, this is not a game of “hegemonic policies,” but a recourse to fallback positions in the expectation that the resulting regional geopolitical vacuum will be filled by a “third foreign power,” which “will once again ignite everything by effectively projecting its power onto smaller countries.”*** So, who will it be?

** Editor’s note: The second part of this quotation, accurately translated from the original, could not be verified.

***Editor’s note: These quotations, accurately translated from the original, could not be verified.

About Lucy Webster 53 Articles
After completing a BA in German and Russian at University College London, I am now studying for an MA in Translation and Culture, focusing on literary and journalistic translation.