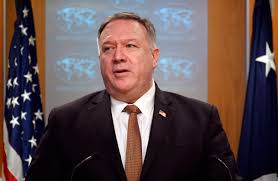 During an interview with ABC on May 3, Secretary of State Mike Pompeo said there is “enormous evidence” that the novel coronavirus originated from a laboratory in Wuhan.

He continued to lie, claiming that “China has a history of infecting the world,” and that “they have a history of running substandard laboratories.” This secretary of state’s performance is outrageous.

Pompeo claimed that he has a significant amount of evidence for making this accusation. Accordingly, we officially ask that he show this evidence to the entire world, especially to the American people whom he is trying to fool. Of course, he can’t present that evidence. He himself knows best that he is lying.

The U.S. government is staging a propaganda war with effort that has rarely been seen, and trying to complicate a straightforward narrative of the endeavors to fight the global pandemic. The two most important goals of combating the virus are to a) flatten the curve and reduce the death count, and b) subsequently restore the economy. In both aspects, the U.S. government is among those countries of the world doing the most poorly. Thus, it has singled out the issue of the virus’ origin in an attempt to redirect the public’s attention as a presidential election draws near, so the Republican administration is no longer at a disadvantage.

The origin of the coronavirus presents a serious scientific question. Until now, no reputable scientist has said that the virus was leaked by the Wuhan Institute of Virology. At the president’s request, U.S. intelligence agencies are conducting an investigation, while at the same time, the secretary of state claims to have “a lot of evidence.” Thus, a scientific question has been turned into a chain of attacks powered by politics, intelligence information and diplomatic accusations. These actions are not only anti-science but shameful. They constitute an outright deception of the public.

If Washington really has any evidence, it should allow research facilities and scientists in the U.S. to talk. If Washington does not have any evidence but is confident it can substantiate its disinformation, it should ask its intelligence agencies to release a detailed report. Obviously, Washington cannot do either. So, it handed the politician Pompeo a mic and had him shout out to the world that “there is enormous evidence.”

Such shameful disinformation will only spread throughout the U.S. and the West, fueled by anti-Chinese sentiment. Such information does not spread without the manipulation of American and Western propaganda, and the use of America’s political power.

This is twisted logic. Scientists in the U.S. remain silent, while political figures such as the secretary of state are at the forefront, accusing the Wuhan Institute of Virology of leaking a virus. To account for this huge gap in logic, Pompeo attacked the Chinese Communist Party and China’s political system, instigating the enmity of certain Americans and Westerners toward China, so that people will find his actions less repulsive and even turn a blind eye to his lies.

First and foremost, the 2020 presidential election is at the source of all this. Pompeo is desperate enough to sacrifice the security of his position to ensure the reelection of President Donald Trump and his Republican Party. The number of deaths in the U.S. has reached 66,700. (The White House was trying to keep the death count below 60,000.) Now that goal is 100,000. Rebooting the economy is very risky under these conditions. Plus, the pandemic in the U.S. is very likely to reach a new peak this coming winter during the November voting season. If President Trump cannot make the majority of voters in the U.S. hate China, how is he supposed to win reelection?

Previously, Washington focused on attacking China for concealing the extent of the outbreak. This accusation is becoming less credible, as a huge amount of recently disclosed public information indicates that the White House vigorously ignored warnings from a range of sources at the beginning of the outbreak. The administration’s negligence is undeniable. Now, the American government is shifting its focus to the Wuhan Institute of Virology by making unreasonable demands to investigate the institution. This move is acting more to prolong controversy, and to further focus American anger and attention on China.

Pompeo’s condemnation of China may draw enough attention so that he sways public opinion Washington’s way. For these American politicians, there are no facts and morality, for winning the election is absolutely everything. When the public begins to focus on the responsibility of the White House in failing to control the outbreak, the Republicans will lose the election along with everything else.

Accordingly, Pompeo has made a surprising appearance on the international stage and is giving an utterly inappropriate performance for America’s top diplomat. Even scientists and intelligence officers are unwilling to participate. It is completely foreseeable that Pompeo, a politician with no bottom line, will make more outrageous and shameless moves.