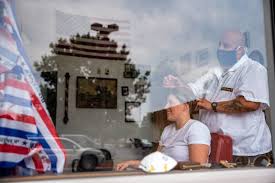 The Centers for Disease Control and Prevention reported that all 12 predictive models show that before June 1, the COVID-19 death toll in the United States will surpass 100,000.* In the most critical moments of the battle against the pandemic, American politicians have openly stated that even if there is no vaccine and more American lives are sacrificed, it is necessary to restart the economy as quickly as possible. On May 20, the Associated Press reported that many states in the U.S., including Florida, have even tampered with pandemic data to gather support for returning to work. Hastily reopening while the pandemic is still uncontrolled will be gambling with the lives of Americans and will lead to further deterioration of the global pandemic situation.

Even More Precious Lives Will Be Lost

Anthony Fauci, director of the National Institute of Allergy and Infectious Diseases, said at a Senate hearing on the pandemic that as soon as states begin to restart their economies, the situation will worsen. Tom Inglesby, director of the Johns Hopkins University Center for Health Security, stated that even if only select areas are opened, a third of Americans will be put at risk of infection. The University of Washington Institute for Health Metrics and Evaluation predicts that, based on current reopening trends, the United States’ COVID-19 death toll will reach 137,000 in early August.

The shortage of COVID-19 tests, insufficient contact tracing capabilities, the lack of cooperation between states and the federal government and an overwhelmed medical system will all increase the public’s risk of infection. If restarting the economy causes a second wave, the government will have no choice but to reimpose the lockdown. This would waste the efforts and sacrifices the United States has made to control the virus, at the cost of the lives of countless Americans.

With severe pandemic conditions, even if control measures are relaxed, it may still be difficult for the economy to recover quickly. In a recent poll, 66% of Americans are unwilling to return to their jobs; 63% of those hope to be guaranteed safety by the CDC, and 48% hope they can return to work in August. The Washington Post and the University of Maryland conducted a survey which revealed that more than half of Americans are opposed to the economic reopening, and 60%-70% feel uncomfortable with shopping in person and eating out. Experts say that a key component of reopening the economy is rebuilding consumer confidence. If consumers are unwilling to go out, it will still be difficult to improve the economy, despite the relaxation of control measures. Evidently, reopening the economy when the pandemic has yet to be controlled and when market production and consumption ability are not guaranteed, ensures that America’s hopes to restart the economy will be as vain as using a bamboo basket to draw water.

Hastily Reopening and Affecting Other Countries

The U.S. reopening during the pandemic not only gambles with the lives of its citizens, but also forces the rest of the world to face the risk together. The current state of the pandemic is extremely severe. Asia is guarding against a resurgence of the virus and Europe has reached a plateau stage, but conditions in the Americas continue to worsen. If Africa is unable to properly prevent and control the spread of the virus, it may result in a large number of deaths. By reopening now, the U.S. will greatly increase the danger of the pandemic and destroy the fruits of other countries’ efforts, disproportionately affecting countries with weak public health systems. Although it acts as a global superpower, the U.S. is not only failing to help control the virus in any way internationally, but will continue to impede any progress. The American military spread the 1918 pandemic around the world, hopefully, the world will not have to pay once again for the United States’ shortsighted and hasty action.

The end of a journey is always the hardest — the United States’ fight against COVID-19 will be difficult. In fighting the pandemic and reopening the economy, we need to find a common denominator between the two. If American politicians turn a blind eye to expert warnings and to people who oppose reopening, and make the wrong decision at the wrong time, there is almost no difference between that and cruelly handing over the lives of Americans and other world citizens to the virus. By acting on political interests alone and ignoring citizens’ health and their lives, as well as the global pandemic situation, the U.S. will hurt itself and others with its selfishness.

*Editor’s note: The number of COVID-19 deaths in the United States reached 100,000 on May 27, shortly after this article was published.

About Jaime Cantwell 8 Articles
I'm a rising senior at New York University Shanghai interested in international relations, music, and anything language-related. I'm originally from the Seattle area, but have spent the past few years in Shanghai, Taiwan, and New York!