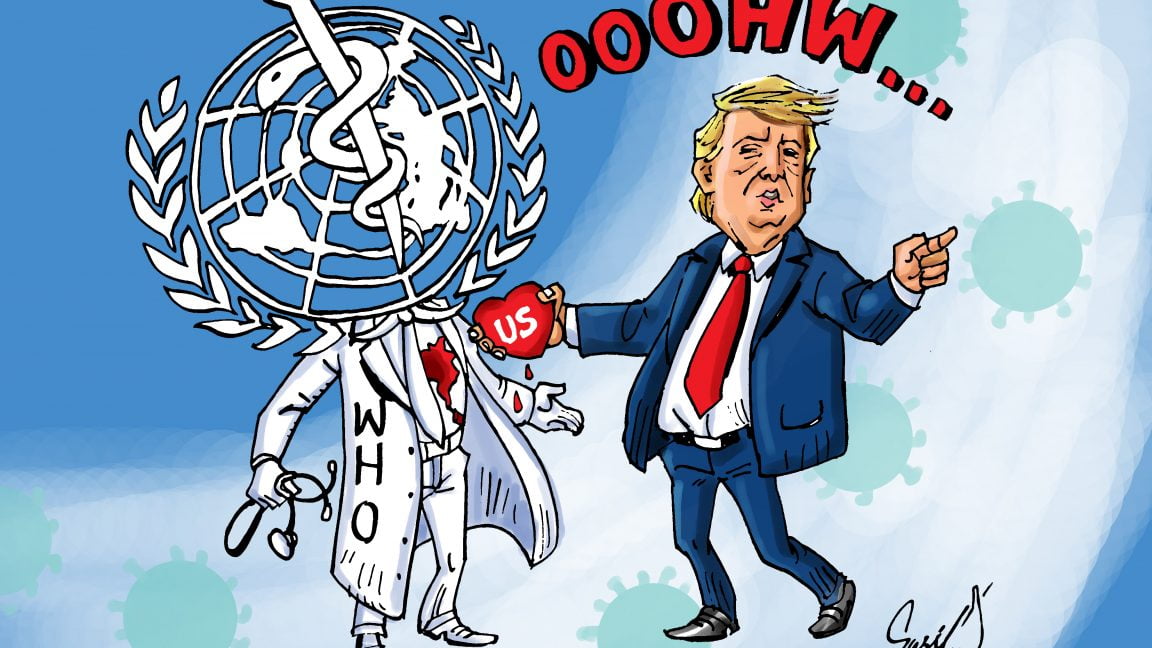 On July 7, Spokesman for the Secretary-General of the U.N. Stepháne Dujarric stated that on July 6, the U.S. had formally notified U.N. Secretary-General António Guterres that it would withdraw from the World Health Organization next July. According to the terms set when the U.S. joined the WHO, in order to formally withdraw from the organization, the U.S. is required to submit an application one year in advance, as well as fulfill all related financial duties in full.

To shed the blame for its own ineffective response on the pandemic, the Trump administration has passed the buck onto the WHO many times since the pandemic began. From its initial threats to stop paying membership dues and the announcement of suspended funding, to its threats to permanently halt funding and withdraw from the organization, and later its announcement that it would end its relationship with the WHO, it’s fair to say that the U.S. government has been advancing step by step toward today’s formal notification of withdrawal. Arrogant until the end, it has not only disregarded the WHO’s efforts to combat the coronavirus pandemic, but also ignored the big picture in the global fight against the pandemic, pursuing instead a policy of unilateralism and continuously pushing “America First” to its extreme.

In reality, the Trump administration’s criticisms of the WHO are simply groundless and disregard the facts. For several months, the WHO has promptly provided accurate information on the pandemic, supported countries as they built up preventative and response capabilities, supplied tests, convened a World Health Assembly, promoted global cooperation for research and development of a vaccine, etc., making major contributions to lead and promote international cooperation against the pandemic and earning resounding praise from the international community. Various major countries, academic journals and public health specialists have all spoken out in support of the WHO, stressing that it “is the only body capable of leading and coordinating the global response to COVID-19.” In contrast, the United States’ failed battle against the pandemic is solely due to its own “chaotic and incoherent” response: Politics is placed above science, the federal government and states are pushing their responsibilities onto one another, and amid the confusion and disputes, a tug-of-war has developed between pandemic control measures and reopening the economy. Preemptive reopening has caused the outbreak to bounce back substantially in the U.S., with new infections consecutively surpassing 50,000 cases per day, and the total number of confirmed infections approaching 3 million. Infectious disease expert Anthony Fauci states that the U.S. is still “knee-deep” in the first wave of the pandemic.

Without a doubt, the United States’ withdrawal from the WHO hurts others, but it doesn’t benefit the U.S. either. Globally, the virus will not be stopped by national borders and it doesn’t care about ideology; if just one country has not brought it under control, the virus will continue to spread across the globe. Especially now, while the virus is still spreading rapidly and has yet to reach its peak, it is time for countries to come together and cooperate, and for the WHO to receive stronger support. The United States’ decision to withdraw from the organization has created a gap in our joint defense against the virus. At the same time, this move is absolutely no help in alleviating its own outbreak. The president of the Infectious Diseases Society of America hit the nail on the head when he stated that the withdrawal “leaves the United States out of global decision-making to combat the virus and global efforts to develop and access vaccines and therapeutics, leaving us more vulnerable to COVID-19.” The facts will bear out that the American people will be the ones to pay the price for the United States’ withdrawal from the WHO.

In recent years, the U.S. government has withdrawn from international organizations and scrapped treaties again and again, as it moves from “America First” toward American domination. In the midst of this pandemic, its actions have put its imperious style on full display, like when it bought up nearly the entire stock of remdesivir, when it attempted to buy out the rights to a COVID-19 vaccine currently in development by a German company and convince the company to relocate to the U.S., or when it prevented 3M from exporting American-made N95 masks to Canada and Latin America, among other things. These kinds of behaviors have more clearly shown people around the globe just how willful, selfish and wildly arrogant American politicians are. The U.S. government has taken the path of unilateralism, placing it in opposition to the common interests of the international community and humankind; for this reason, it is unpopular.

The author, Lan Linzong, is with the Central Commission for Discipline Inspection website.