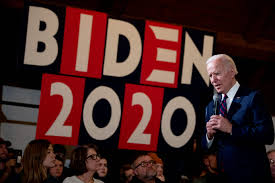 Joe Biden is leading an unambitious presidential election campaign. But Donald Trump’s policy is still disastrous – which might give Biden hope of a victory.

Anyone who has noticed anything at all from Joe Biden in recent weeks and months will remember two scenes in particular: Biden in front of a white bookcase in his basement, and Biden in front of his garden gate, overlooking a lake.

At home. The presumptive Democratic presidential candidate has mostly remained there since the outbreak of the coronavirus pandemic. In the last few weeks, he has livestreamed broadcasts from the basement or first floor of his house in Wilmington, Delaware, getting a modest number of viewers.

He has made only sporadic election campaign appearances — mostly in the area immediately near his home — and given just a few interviews. Apart from that, the 77-year-old candidate, who will run against Donald Trump in November, has remained surprisingly absent throughout the biggest health and economic crisis of the last few decades.

This has not done him any harm though — Biden is two points ahead of Trump in the national polls. And in the important swing states where voters are more fickle and the race could be close, Barack Obama’s former vice president is also way ahead. While President Trump is putting voters off in droves with his mismanagement of the coronavirus crisis and is pressing to reopen the economy contrary to warnings from his own advisers, Biden hovers silently in the background. There have been press releases from his campaign team here and there in which the candidate attacks his opponent and explains how he would manage the crisis, but not one of his ideas has caught on in public debate.

On Thursday, Biden decided to finally set out his own policy. At a metal works plant near his hometown in Pennsylvania, he presented his economic plan. Biden promised $700 billion for research projects and national infrastructure. Industrial jobs would be brought back into the United States using federal resources. “When we spend taxpayers’ money — when the federal government spends taxpayers’ money — we should use it to buy American products and support American jobs,” he announced.

The former vice president’s patriotic tone in speaking about the economy, usually something one hears from Trump, marks a slight shift from the liberal free trade policy the Democrats have stood for over the last few decades, but it is not much more than that. Biden’s other proposals — a higher minimum wage, more money for schools in poor areas, and free community college — are indeed reasonable, but are ultimately mere political adjustments. This will hardly alleviate the emergency in the U.S., where a significant number of citizens are suffering under the largely unrestrained power of capital. The lack of fundamental social rights hits many people harder day after day, breaking down the glue which has been holding society together. In the absence of any political alternative, Biden has a legitimate hope of becoming the 46th president of the United States.

Biden’s election campaign is an enigma. At the beginning of the year, the most well-known candidate in the Democratic field appeared weak and defeated. The party’s leftist Vermont senator, Bernie Sanders, won the first three primaries, and at that point, Biden seemed to be out of the race. But then the political veteran achieved a convincing victory in the South Carolina primary.

Biden Has Vanished into Thin Air

Since nearly all the other Democratic presidential candidates subsequently withdrew from the race and rallied around Biden, he had a decisive advantage over Sanders, whose left-wing politics the Democratic establishment feared most of all. Former President Barack Obama was also involved in the background, helping to prevent a shift to the left by pushing the party to unify behind Biden.

But just after winning in the primaries, Biden disappeared. He was seen at a press conference for the first time in three months only last week. And despite his newly proposed economic plan, it is still not fully clear what Biden really wants—other than to defeat Trump.

Not many voter groups really feel at home with Biden, especially not progressive Sanders supporters. A task force made up of Biden allies and Sanders supporters, which has just published a paper aimed at unifying the Democrats, makes few concessions to the progressive wing of the party. Only the advocacy of free day care and stronger social security could be counted as successful moves by progressive Democrats. There would be no universal health care coverage under Biden, one of Sanders’ key concerns, even though a solid majority of Democrats and even independent voters support this.

Polls show that Biden won in the primaries mainly because voters trust him the most to beat Trump. In terms of policy, however, many people are more sympathetic to Sanders’ positions. And even moderate voters would have preferred a younger, more dynamic candidate, as shown by the success of the equally conservative up-and-coming talent, Pete Buttigieg, during the primary race.

Relics from the Obama Age

But now Biden is the presumptive Democratic candidate and it is clear that he intends first and foremost to continue the centrist politics of the previous administration and restore Obama’s health care law despite all its systemic weaknesses. There are also many relics from the Obama era that still exist in Biden’s political environment. Biden’s economic adviser, former Treasury Secretary Larry Summers, was an advocate of financial deregulation for many years. He was part of the team of experts set up by Obama to tackle the financial crisis. The outcome of that is well known — while large credit institutions were bailed out, millions of Americans lost their homes and jobs.

Biden does not stand for a comprehensive redistribution of wealth. Because of the pandemic, millions of Americans currently have neither jobs nor health insurance. According to Biden, the unemployed should not get automatic access to public health insurance. He would much rather subsidize private policies, which sometimes offer bad terms and are often too expensive for the unemployed.

It seems rather strange to hear former opponent Sanders say Biden’s presidency could be the most progressive since former President Franklin D. Roosevelt. Roosevelt was considered a great reformer. After the economic crisis of the 1920s and 1930s, he laid the foundation for an American welfare state with the New Deal.

But Biden’s appeal still remains. Now only Republicans and their affiliated media outlets discuss Biden’s numerous gaffes. (He recently could not remember the name of the local newspaper in his home state of Delaware.)

However, the challenger’s strategy has a key weakness: without his own support base, Biden is completely dependent on Trump’s failures. According to a recent survey by Pew Research, almost two-thirds of voters who plan to vote for Biden are only doing so out of an aversion to Trump. Conversely, 76% of Trump voters have indicated they are voting for the real estate billionaire with full conviction.

Biden is essentially viewed as the lesser of two evils by a considerable proportion of the electorate. He and Trump were in fact much closer in the polls at the beginning of the COVID-19 crisis. Trump fell out of favor with many people only because of his controversial coronavirus policy and his reaction to the protests against racist police violence.

What if the tides turn more quickly than expected? There are only four months to go until the election. Just think of Hillary Clinton who had a big lead in the polls in 2016 for several months only to lose to Trump in the end.

What happens if the infection rate falls, the economy and job market recover and the heated protests subside? There would then be a largely nondescript Democratic candidate running who has not even inspired his own electorate, in contrast to the media savvy Trump. He is looking forward to a verbal duel with his rhetorically burned out opponent and is already demanding additional TV debates.

Then again, it is hard to imagine that Trump will shift his political course in the near future. Instead of demonstrating leadership, the president rages on unabashed against the media, the left and every other genuine or alleged opponent, all while the country sinks deeper and deeper into overlapping crises.

It is becoming clearer to Americans that Trump is not really interested in their problems. This feeling alone could be enough to help Biden win the presidency. After four years of a presidency shaped primarily by narcissism and scandal, many voters appear to long for someone who will bring calm to the country — even if the newcomer may not advance the nation socially.

Livestreams, a handful of public speeches and a solid, if only mildly ambitious, campaign platform could actually be enough to win the most important political office in the world. Luckily for Biden, Trump has lowered the standards by that much.