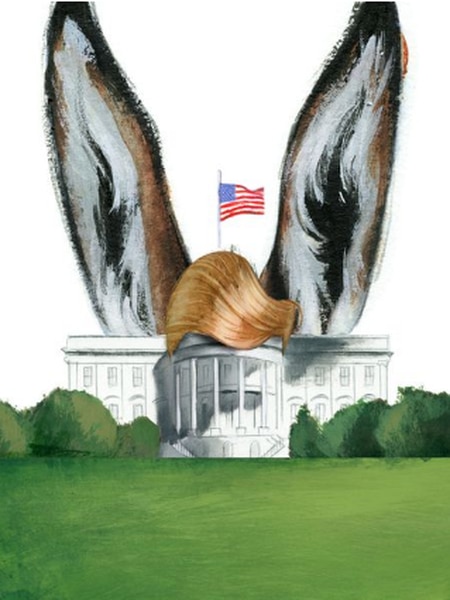 The chaos documented in this humorless book, in which dysfunction surrounding President Donald Trump dangerously surfaces, makes it possible to call the White House – without exaggeration – a true asylum.

The White House tried in every way to block the release of the memoir of John Bolton, who served as national security advisor between April 2018 and September 2019. However, the book, “The Room Where It Happened: A White House Memoir,” was recently published in the United States following a legal dispute which held up publication.

It`s a lengthy memoir in which Bolton describes his experience working in the Trump administration for 1 1/2 years in great detail. Bolton sharply criticizes his former boss, President Donald Trump, and provides abundant examples of what we already knew; that the president of the United States lacks even the most rudimentary preparation for his role as president demonstrated by his daily mistakes and contradictions which occur because he is not ready for the job. This is true despite the popularity he enjoyed during the first few years of his administration, and which he seems to have lost, to such an extent that according to the latest polls, he may be soundly defeated in the upcoming presidential election in November by the presumptive Democratic presidential candidate, Joe Biden.

The expectations that this book has raised in the United States and around the world are due above all to the fact that Bolton is a noted hard-line conservative, albeit well educated and well informed, having held similar important positions in the Ronald Reagan and George W. Bush administrations, including as U.S. ambassador to the United Nations for Bush. In his public career, as well as in his commentaries on Fox News, Bolton has always staked out the most extreme positions. For example, in the case of Israel, he was in favor of recognizing Jerusalem as the capital of the Zionist state, and supported the military occupation of the West Bank and now, its annexation. After he won the election, Trump said that Bolton would play an important role in his administration. Ultimately, Bolton was nominated as national security advisor, a position charged with advising the president on a daily basis about international matters, a person who accompanies the president on state visits and sits alongside the secretary of state, an official who coordinates and provides a sense of coherence to American foreign policy.

The first thing Bolton found out in his new job was that President Trump did not like his thick walrus-like mustache. The second thing he learned was that Trump is generally uninterested in even the most elementary things, such as the status of Finland, which Trump actually believed was not an independent country, but a Russian territory. Despite such glaring and frequent mistakes which display a supreme ignorance about geopolitics, Bolton in no way employs the kind of belittling tone that many readers might expect. On the contrary, it is a rigorous account, comprising a near daily chronicle of his experiences; first having to inform Trump, and then dealing with the president’s firestorms and disconcerting initiatives, (correcting his mistakes, you could say), which he would usually take on, and which have become the hallmark of Trump’s administration.

Bolton comes from a blue collar Maryland family and studied law at Yale , thanks to scholarships and student loans. Beginning at a very young age, he was a Republican and defended his more conservative and reactionary views, with arguments, it should be noted, that were much more forceful than those usually made the Republican Party. From a very young age, he declared himself a follower of the ideas of the Irish philosopher and historian Edmund Burke, and Bolton’s first book, “Surrender Is Not an Option: Defending America at the United Nations and Abroad,” in which he explains his political convictions, was a bestseller. Bolton’s new book also stands a chance of becoming a bestseller with perhaps the most amusing aspect being that due to its opposition to Trump, the left was quick to celebrate its publication.

Bolton arrived at his office in the White House at 6 a.m. and ate breakfast there with diplomatic and military officials; it was the first meeting of his workday. Theoretically, his job consisted of outlining the major priorities in American foreign policy; in reality, his obligation was, above all, to understand what President Trump wanted in that foreign policy, and to bring order, apologize, and provide some semblance of coherence to the infinite mistakes that the commander in chief made in this field on a near daily basis.

What he relates is perfectly understandable. Since the president generally did not know what he was involved in, he distrusted everyone, except maybe his own daughter, Ivanka, and his son-in-law, Jared Kushner, a pair of interlopers. Trump paid much more attention to the press, and above all, to television, than to the major issues of the day. The meetings with his most ardent supporters were primarily characterized by his abundant use of swear words and the frenzy with which he fired and replaced his advisers. The fact that Bolton remained at Trump’s side for more than 1 1/2 years was something of a miracle. In the end, Trump demanded Bolton’s resignation, too, accusing him of having abused his travel privileges by taking too many military flights. It is a silly accusation when one reads Bolton’s memoirs, which specify, with sickening detail, his business trips and travel conditions.

The book delves into all the important international issues that Bolton intervened in, from Libya to China, Iran to Cuba, Russia to the European Union, from Afghanistan to Great Britain – the reader may get dizzy from this frenetic pace – efforts, which for the most part, were of little value to Trump. Well developed plans were brutally challenged during tumultuous press conferences, which would later have to be carefully corrected by Trump’s advisers, and done so carefully without contradicting their boss. The chaos documented in this humorless book, in which dysfunction surrounding President Donald Trump dangerously emerges, makes it possible to call the White House – without exaggeration – a true asylum.

For obvious reasons, the nearly 50 pages that Bolton dedicates to Venezuela has a special interest to this author. It should be noted that from the beginning, Trump, as well as his main supporters, were surprised by the enormous opposition to Nicolas Maduro, which appeared to support Juan Guaido, and immediately agreed to support Guaido, rejecting the use of military force against the Chavist regime. As I recall, despite this understanding, President Trump repeatedly threatened military action against Maduro, knowing perfectly well that this option had been previously rejected, and that his saber rattling lacked any real consistency. On the other hand, in his private meetings, Trump showed a certain level of skepticism toward Guaido, and even secretly showed some sympathy for Maduro, “the tough guy.” One can describe Trump’s feelings about Putin, the new Russian czar, as having the same secret affection. Bolton vigorously analyzes the difficult relationships that Trump maintained with old Western European allies and his systematic inclination to meet with crazed dictators, such as the fat man who rules North Korea with an iron grip, or the new lord of Russia.

What will happen with the United States if the majority of the American people reelect Trump in November? I believe it will be a great disgrace for the United States in particular and for the world in general. With his ignorance and arbitrary nature, Trump has managed to distance his country from traditional allies and moved closer to its enemies, without any thorough understanding of what has precisely happened. That is the most important lesson of Bolton’s memoir. If this administration is to continue for another four years, America’s historical enemies will gain even more ground than they have already gained in the last four years. What a paradox it is that an ultrareactionary American such as Bolton, has demonstrated how and why Trump must be defeated in November.