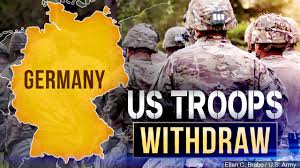 Donald Trump is mistaken in believing that only allies benefit from the United States, and that the United States does not benefit from its alliances. This is unfortunate, but it is far from being as dangerous as the argument of left-wing eurofanatics from the Social Democratic Party, the Greens Party and the Left Party.

If such serious issues were not at stake, you could sit back this summer and simply enjoy the ongoing game of geopolitical limbo. Donald Trump lowered the bar of common sense regarding security policy and danced easily below it. But he did not count on SPD parliamentary group leader Rolf Mutzenich. He showed the U.S. president how to further lower the bar of strategic debate, and how to replace long-term, rational politics more brazenly with sensitive, populist discourse.

Trump made good on prior threats and announced the withdrawal of 12,000 U.S. soldiers from Germany as punishment for Germany’s apparently insufficient defense spending. In return, SPD’s Mutzenich intends to retaliate by terminating the arms agreements between Berlin and Washington. Trump and the SPD are very much alike: both simply close their eyes to the global reality of the 21st century.

Trump is mistaken in believing that only allies benefit from the United States, and that the United States does not benefit from its alliances, even though the entire democratic West is challenged by autocracies like China and Russia. This is unfortunate, but it is far from being as dangerous as the argument of leftist European fanatics like Mutzenich. The United States has one of the largest armies in the world and a nuclear arsenal.

Germany has no nuclear weapons, a dilapidated army, and is part of a European defense alliance, which mainly consists of noble language, and where the reality is that neither France nor the U.K. will share its nuclear weapons with the rest of the allies.

If the SPD calls for an end to arms cooperation with the U.S., there will be concrete repercussions: the Bundeswehr will no longer buy U.S. fighter jets, which can be used to fly American nuclear bombs stored in Germany to their destination. This would utterly devalue America’s promise of protection to Germany, protection which has been in place for 70 years. Can we get by without it? No. There is no alternative to the trans-Atlantic partnership.

A reassuring thought is that after the presidential in November, Trump may no longer be sitting in the White House, but there may be instead a levelheaded trans-Atlantic president (who will properly remind Germany of its North Atlantic Treaty Organization commitments). The real problem with regard to the Bundestag election next year is the fact that there are three parties, the Greens, SPD and Leftists in Germany, all of whose top leaders consider the alliance with the U.S. to be superfluous.