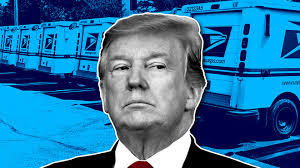 Panic has been mounting in President Donald Trump’s entourage in recent weeks as polls indicate that a majority of Americans disapprove of his administration and its actions or lack thereof in dealing with the pandemic, putting his opponent, former Vice President Joe Biden, in the lead with three months to go before the election.

Recently, the president reinforced his most effective strategy, creating chaos, by tweeting that if the mail-in ballot option is used, it will result in the biggest election fraud in American history. Subsequently, he even proposed postponing the election to allow voting to take place in a safe manner.

One can easily guess the president’s strategy, pressed by the urgency to act and to increase his standing in the polls. He is seeking to undermine confidence in mail-in voting by condemning his possible defeat before it has even happened. Trump is preparing the public, especially his base demographic, to believe that a defeat for the Republican Party would inevitably be attributed to electoral fraud caused by mail-in voting, which he himself has used more than once.

However, this option has already been put in place for our neighbors to the south. It is possible to vote by using a mail-in ballot in 33 states and in the District of Columbia. In fact, more than 23% of Americans voted by mail in the 2016 presidential election. Experts consider the possibility of fraud surrounding mail-in voting to be very low, especially when compared to the fraud committed during the 2016 election by Russian hackers who attacked several polling stations and stole information about U.S. voters.

So why discredit mail-in voting and threaten to postpone the election? It is important to acknowledge that mail-in voting benefits Democrats. Why is that? First, because in the United States, there are no uniform standards for the regulations which govern the voting process as each state sets its own rules.

Republican states enact numerous measures that make it as difficult as possible for voters who do not fit into a specific category, effectively, anyone who is not white. For example, voters must pay for a photo ID, which disadvantages the poor, who are all too often African American or not white.

In Texas, for example, a student photo ID card is not accepted for voting, but a gun club membership card is allowed, which inevitably favors the white population. Also, Republican states reduce polling station hours, making it impossible for people to go to the polls without missing work. Mail-in voting immediately eliminates all these measures meant to discourage votes that are not in favor of the Republican Party, since it remains the most effective way to get the maximum number of votes from the population without constraints.

The Republicans’ strategy is simple: to mobilize their base demographic and limit “easy” access to the vote as much as possible for anyone who is not part of their base. Overall, the Republican base demographic is thus easily mobilized since it is very homogeneous, white, affluent, heterosexual and Protestant; whereas the opposite phenomenon is found among Democrats, who are more difficult to identify and less easily mobilized because of a highly heterogeneous demographic. It is therefore a matter of Trump and his retinue convincing voters about the “danger” of mail-in voting and making this option unacceptable.

Trump has repeatedly criticized the U.S. Postal Service as a ridiculous and unprofitable agency, suggesting that private companies would be much more efficient and that privatization would be the most desirable option. By appointing one of the biggest donors to his 2016 campaign, businessman Louis DeJoy, as head of the United States Postal Service last May, Trump has made the post office a central and partisan issue in the November election.

Recently, several U.S. newspapers have reported significant delays, raising the possibility that Republicans may seek to slow down and block the postal service a few weeks before the election. In fact, several Democratic members of Congress, including House Speaker Nancy Pelosi, have strongly criticized the attack on the Postal Service by the administration and called for an immediate end to this sabotage.

In today’s United States, during this era of pandemic combined with the systemic violence being perpetrated on the African American population, violence which lies at the heart of the division in the country, Trump cannot afford to have as many people as possible vote. We can expect to see several strategies meant to slow down and denigrate any democratic process that could work in favor of the many voters who have been left outside the electoral system for far too long and allow their voices to be heard, thus causing Trump’s downfall.

About Mollie Lippett 8 Articles
I am a British freelance translator based in the UK. I have a BA in Modern Languages and Translation from the Univerity of Nottingham. Having spent many years living in France both before and after my degree, I hope to move out there more permentantly to pursue my translation career en France!