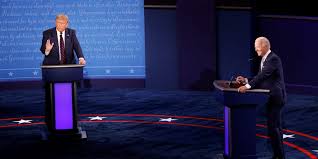 As the candidate who is behind in the polls, the president had more to gain in this first confrontation, but his strategy of pulling the wool over your eyes had its drawbacks.

Joe Biden avoided using facts and figures (“I got to the Senate 180 years ago,” was one of his gaffes before the debate). And that was enough for him to be declared the winner of the first presidential debate by analysts and news organizations that lean enthusiastically toward the Democratic candidate.

Donald Trump came onto the debate stage like the boy who wants to control the whole playground, ready to fight any who might challenge his claim.

To complete the metaphor of a children’s dispute, Biden managed to stay on top of the wall, singing “Nana nana nana” without, aside from some teasing, directly engaging in the fight.

Polls have not been exactly definitive, reflecting what the majority of voters already believed. According to CBS and YouGov, 48% thought Biden won and 41% thought Trump was the winner. But more tellingly, 69% felt uncomfortable. Only 17% felt as though they left the debate feeling more informed.

And rightfully so. The two men are among the most divisive and questionable candidates in the history of American politics.

Trump is Trump, a showman who takes a perverse pleasure in deepening divisions in American society, banishing competent cabinet members, and governing like he sits upon an ego the size of Everest. Biden was only chosen by Democratic voters in the primaries because he seemed to be the only viable alternative: a moderate who ignores the insanity that passes for politics in the left-leaning corners of the Democratic Party.

Which is to say: He won because of who he isn’t, and not who he is.

So who is Biden? A politician coming out of retirement who, in almost 50 years as a senator and then vice president, has not made a single major policy contribution. He’s great at making himself appear as though he’s a friend of the working class — who have been cruelly exterminated by the globalization policies he supported — and he’s full of empty speeches.

But Biden’s trustworthiness — or Trump’s volatility — is confirmed by a recent fact: Wall Street, the street that embodies the financial world, is putting much more money into the Democrat’s campaign.

After the debate, the markets opened lower in Asia, which was understood as a response to fears that Trump will contest the results of the ballots (or the vote-by-mail envelopes themselves), and so would create a long-term impasse.

But we must remember: In his 2016 campaign, Trump said precisely the same thing in reaction to the results of his debates with Hillary Clinton. After he won with 304 votes in the Electoral College, he never spoke of it again.

According to a saying that is often invoked in the realm of political analysis, debates rarely define an election, except when they reveal a big weakness in one or the other candidate. The debate yesterday revealed weaknesses in both candidates, and therefore probably won’t radically alter the present situation. There are only 33 days left to make any such change.

It’s not a favorable situation for Trump, who has been consistently eight or nine percentage points behind Biden.

In terms of the Electoral College, he is thought to be guaranteed 230 votes. He only needs to “turn” some states that are already leaning his direction to reach the 270 that ensure a win.

The fact that the polls were wrong in 2016 does not automatically mean that the same mistakes will happen again. Trump continues to have the enthusiasm factor on his side. While Biden makes speeches to nonexistent audiences, rallies and caravans demonstrate how Trump is revered by his base: those who go out on the street with American flags, red MAGA caps and the certainty that their “enemies” minimize the strength of the true America.

Trump’s chances are tied to the contagiousness of this enthusiasm.

In the same way that more people will leave home to vote for Biden than they did in the last election just to get Trump out of the White House, the president needs more voters sufficiently mobilized to prove that “they,” once again, were dead wrong.