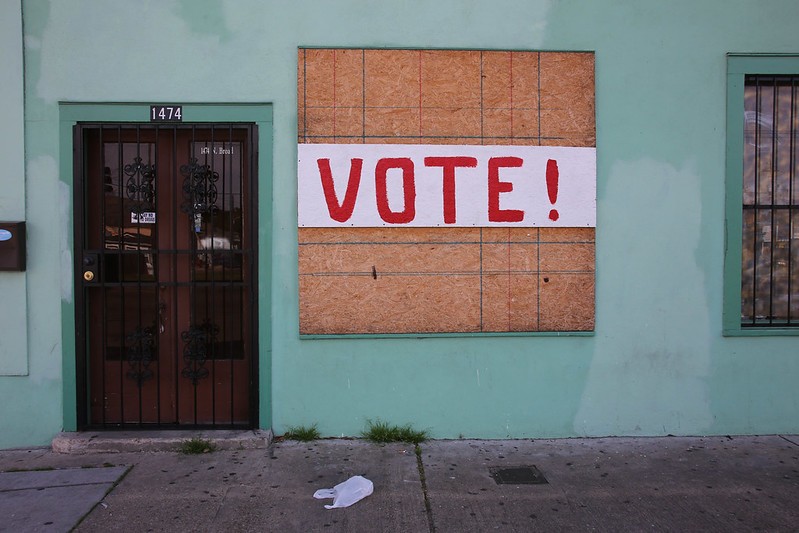 The United States has always been an unhealthy, unequal country. Arjen van Veelen discerns that Trump is not a temporary virus.

“New York City Misses You Too,” says a glowing ad sign for city trips. I cycle through drizzly Rotterdam, on my way to election night. I don’t miss New York, but I do get the billboard: Soon, when the virus is gone, normal life will resume. We’ll be able to fly to New York City again, as behooves decent globalists. Thank God everything will be normal again then.

There are enough people who think the same way about the presidential election. Those who see Donald Trump as a horrible, but temporary virus, a pestilence that has kept the U.S. in its grip for four years. But have faith, tonight everything can change: Joe Biden will make America normal again. We’ll meet again.

I lived in that “normal” America for too long to long for it. For two years, I lived in St. Louis, Missouri, a depressing city in the middle of the country, where one in three residents is poor; where one in 1,200 residents is murdered every year; where thousands of houses are empty, next to people living in tents. Where corrupt corporations hardly pay any taxes, while decent citizens end up in jail for a broken tail light. An America full of extreme economic inequality, de facto in full daylight. A merciless place. A normal American city.

And mind you, when I lived there, there was a normal Democratic mayor, Democratic governor and Democratic president named Barack Obama. In St. Louis, I learned that for many Americans, it doesn’t matter one iota who is in power.

So that’s what I say to the friend with whom I watch the results: It doesn’t matter who wins. Seriously. Take something as fundamental as minimum wage—it has been falling since 1968. Clinton, Bush or Obama, all the same. But still I’m in front of the TV with red cheeks, secretly hoping that the man who has embodied the status quo for 50 years will win.

I hate that I find it exciting. Isn’t it a disgrace in itself that the race is close? Half a fascist versus a decent man, how hard can it be?

But I know that according to Gallup polls, 56% of Americans say their lives are better under Trump compared to four years ago. Record numbers. And I know the Democrats — once the pro-labor party — have turned into a party for corporations. Best buddies with Silicon Valley. I also know that the U.S. is a rotten tree with fungus growing on it. I hope the fungus goes away, sure. But even then, that rotten tree remains.

In fact, the U.S. was never really healthy; it is a country that was born ill. I read it in a stellar new book, “The Broken Heart of America: St. Louis and the Violent History of the United States.” It’s not written by a left-wing activist, but by a white Harvard professor, Walter Johnson, who grew up in Missouri. He describes a history full of ethnic cleansing, imperialism, predatory capitalism, lynchings and exploitation — summarized as racial capitalism, an ingenious design that exploits white and Black indigents by pitting them against each other. It’s an ancient plague, even older than that other wonderful scapegoat, neoliberalism. That plague is the United States’ plan.

I knew the story, but still it shocked me. For example, when I read that even the famed Abraham Lincoln, the president who abolished slavery, wanted to drive former slaves out of the country. And that his fan base consisted of white racists. And what about spraying radioactive particles on Black St. Louis residents? Even more shocking is that it’s not part of history. Rich white men who exploit the poor of all colors, that’s how the U.S. still rolls. Look at Amazon’s Jeff Bezos, a merciless slave driver. Just better camouflaged. More decent.

And everyone who shops at Amazon, including me, contributes. Isn’t my disgust for Trump a nice alibi for not thinking about that?

Nah, I don’t miss New York tonight, that romanticized, lovely America. But I do miss St. Louis, Missouri. Especially the people I met there. They know that people don’t just have a vote in elections. They took to the streets for Trump.

Because in addition to that age-old tradition of economic and racist violence, the U.S. — unlike the Netherlands — also has a strong tradition of rebellion. Walter Johnson describes this hopeful history in excruciating detail: slaves who shed their chains, Indians who resisted in vain, Black women during the Depression who successfully demanded better wages in the food industry. Protests that scared the elite, because impoverished white and Black people marched together.

It doesn’t matter who becomes president, I tell my friend. My mantra is getting more and more desperate. America has been ill for a long time, okay, okay, but it could be even worse, right?

A little before 9 A.M. Trump prematurely claims victory. “The founding fathers are rolling in their graves,” laments a CNN anchor. I don’t know, those founding fathers were worse than Trump—slave-owning predatory capitalists.

Despair backfires. I think of the young people I saw on the streets of Ferguson, who were not afraid of tear gas. I think of the fast food workers I saw, along with university professors on freelance contracts, demonstrating together for a higher minimum wage. Hope lies in bottom-up forces that change policy, regardless of who is president. Rebellions in the tradition of Native American leader Black Hawk and civil rights leader Martin Luther King, Jr.

I think of a good friend from St. Louis, a Black man, born and raised during American apartheid. He nevertheless studied philosophy. He texted me this week, “White supremacy is an American value.” He took to the streets under Obama and under Trump. When a lawyer couple aimed their automatic weapons at protesters who walked peacefully past their home in St. Louis, he was one of those protesters. He will continue to take to the streets because he understands that the struggle is not measured every four years, but in centuries.