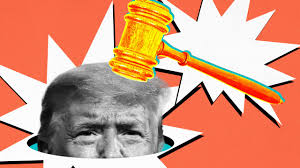 Let’s talk again about the balance of power, the system of checks and balances, and the importance of institutional independence. The American presidential election epic has reached its final chapter. The Electoral College, the body that ultimately elects the president of the United States, voted on Dec. 14. Until the vote count is officially confirmed in January, we will have yet to see the end of the great judicial drama unleashed by incumbent President Donald Trump in an effort to overturn the election results.

The most important conclusion we can draw from this saga is that democracy is a key component of the independence that exists between the branches of government. But despite obvious hopes for democratic governance, there are some interesting legal points that are worth noting.

A Holiday for Democracy

Both political analysts and ordinary citizens will certainly remember the 2020 election for its partly unorganized, but extremely intense confrontation between different kinds of information. Some even had the audacity to assert that this election was one of the dirtiest in modern U.S. political history. The confrontation between the two camps included the whole arsenal of classic and modern political tricks and attacks. Loud and uncontrolled, the first debate between the presidential candidates was characterized by traditional “I’m the best” types of promises historically labeled the campaign.

In many ways, President Trump, a well-known wheeler and dealer, set the general tone of the election campaign. On the eve of the vote, he began to work over a scenario about the possible ways the Democrats would falsify results. This generated great turbulence among social media and created real life street confrontations. The belief in real or imagined election irregularities was one of the forces that emboldened the desire of Trump’s allies to closely scrutinize the accuracy and fairness of the vote counting process.

A Battle on All Fronts

At first, in order to identify possible manipulation, Trump’s legal team attempted to force local election commissions (let’s call the collegial vote counting bodies by just such a Ukrainian term) to start a vote recount. Interestingly, this campaign was supported by reports of alleged ballot stuffing, voting by dead people, and distrust of electronic vote counting systems. Such allegations as ballot stuffing, voting by the deceased, as well as expressions of distrust in electronic vote counting systems fueled this post-election campaign. Pennsylvania, Michigan, Wisconsin, Nevada, Georgia and Arizona were its main battlefields. However, not everything turned out as Trump’s lawyers planned. In some states, federal judges began to dismiss the Trump team’s lawsuits outright. The Pennsylvania Supreme Court rejected both lawsuits filed by Trump’s representatives, lawsuits which alleged a violation of access by election to the counting process and the existence of several thousand illegal ballots.

Drawing on similar precedents, the Michigan Court of Appeals rejected a lawsuit requesting delay of election certification in Wayne County. A lawsuit filed in Arizona alleging an inaccurate computer vote count did not reach a hearing and was dismissed at the outset of the case. In Georgia, where a recount was carried out in accordance with state law, two federal judges rejected Trump’s lawsuit seeking to block the state’s recount. Federal courts in Wisconsin and Nevada issued similar decisions regarding Trump’s other lawsuits.

Trump had high hopes that the Supreme Court would help him. Having appointed as many as three Supreme Court justices during his presidential term, he became rather unique, especially in relation to the Supreme Court. It should not be forgotten that the Supreme Court justices serve life terms, so each appointment to the court is a strategic step forward with regard to subsequent presidential administrations. In 2017, President Trump nominated Neil Gorsuch; in 2018, the nomination of Brett Kavanaugh became an epic event, and in October, Trump nominated Amy Coney Barrett. It is obvious that for President Trump, such an outlay of justices is an investment of political capital. And given that his presidency helped to reassemble the conservative majority on the Supreme Court that the Republican Party has long sought, Trump’s appointments are not surprising. That is probably why Trump and his administration hoped for a positive ruling from the Supreme Court on his lawsuits contesting the election and vote recount.

When the majority of state judges refused to review the election results and order the recount, the response from the Supreme Court became especially relevant. In such a situation, only the Supreme Court can order state judges to start a recount. However, the Supreme Court dismissed both lawsuits filed by Trump’s legal team: the Pennsylvania case and the Texas petition seeking to overturn the results of the presidential election, which was supported by 17 other Republican led states. Not one of the justices issued any objection or opinions on the issues raised, not even the three appointed by Trump. The Supreme Court took just 34 minutes to dismiss the Pennsylvania lawsuit, delivering its decision in a single sentence. Indeed, Trump’s court wars are over.

It has been an interesting, largely instructive and complex page in U.S. political history. What lessons can be learned?

The situation in the United States is beginning to return to normal. Everything is moving toward the peaceful transition of power (with the exception, of course, of heated Twitter arguments). So what helped avoid a potential political crisis in this case?

Despite political appointments and the apparent influence of the presidential administration on the Supreme Court, the judiciary system and the legal reasoning of the judges ensured their impartiality and prevented them from engaging in political adventure. The bottom line here is the logic of the system itself and the value placed on a judge’s image, regardless of his salary or whether he is a protege of any politician.

An Effective System of Checks and Balances

Not Personal, but Party Affiliation

Now, about political culture. In Ukraine, a political party most often represents either a business project or a personal brand embodied in a political union. Unlike our country’s politicians, it is rare for an American politician to become the sole leader and a “messiah” for his own party, even if he runs his own lobbying firm and has a number of supporters. Therefore, it is not only his opponents who aim to create resistance and curb his power, but members of his own party.