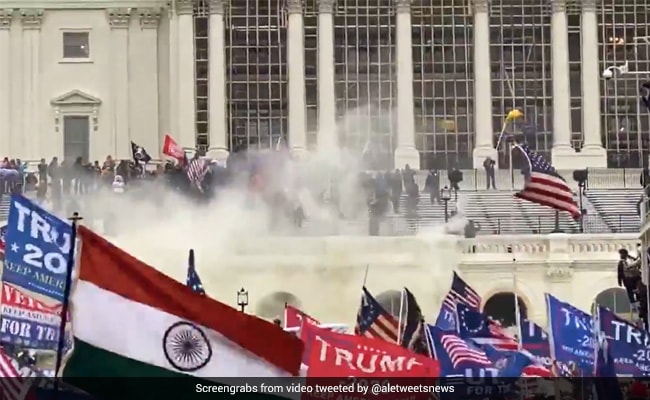 The invasion of the Capitol shows the dangers of polarization.

The democracy of the U.S., with its admirable centuries of history and of honor for having illuminated the best of the world’s potential in the last century, underwent one of its darkest days in decades Wednesday. Demonstrators who support Donald Trump — and who were stoked by him — broke into the Capitol when the representatives of the national government were in session certifying the results of the presidential election won by the Democratic candidate, Joe Biden. It is the frightening result of years of systematic effort on behalf of the populist-nationalist leader to foster polarization within the core of U.S. society. Years of painstaking work throwing gasoline on the cinders of civil and serene coexistence have fanned the flames of the worst fire in the very temple of U.S. democracy.

The certification session shows the divide in the ranks of the Republican Party, exhausted by the excesses of the outgoing president in the last four years and trying little by little to distance itself from the shadow of the populist leader. The Republican Senate majority leader, Mitch McConnell, and Trump’s own vice president, Mike Pence, refused to sign on to Trump’s plans to short-circuit the transfer of power to Biden after a highly scrutinized electoral victory, recounts and multiple judicial decisions. Some representatives of the once respectable party, nevertheless, continued trying to obstruct the Electoral College certification on orders from the president. It was in that moment that the breach occurred.

At the same time, the country was watching the runoff elections in the state of Georgia to award two decisive seats in the Senate. The first had already been won by the Democrat, and the second was moving along the same route with minimal differences when the assault took place. [The second seat] was awarded a couple of hours later, setting the stage for a profound political shift in the country and granting the Democrats the majority in both chambers.

In this moment of maximum political tension, Trump’s irresponsible attitude produced this new, embarrassing climax, with seriously antidemocratic characteristics. The completely meritless questioning of the election results and of the democratic institutions by this same outgoing president have inflicted, as is now evident, a terrible wound on U.S. society. Not only must one think about the radicals who assaulted the congressional building, but also about the millions of citizens who, without going to divisive extremes, have lost faith in democracy because of blatant lies by an unworthy president of the party that won at the [2016] polls.

What lies ahead is the arduous task of national reconstruction. Biden, by his experience and disposition, appears to be well positioned to try it. But the damage is enormous. Unity of all the U.S. Democrats is essential to stop the harmful virus against democracy that Trump embodies. First, it is up to the Republican Party to completely disconnect from this harmful figure, and restore the once-great party’s historical honor. Civilian society, in its entirety, should also collaborate in this effort.

The lesson could not be clearer for all parties in Western democracies. The price of polarization is severe. It is advisable not to underestimate it.