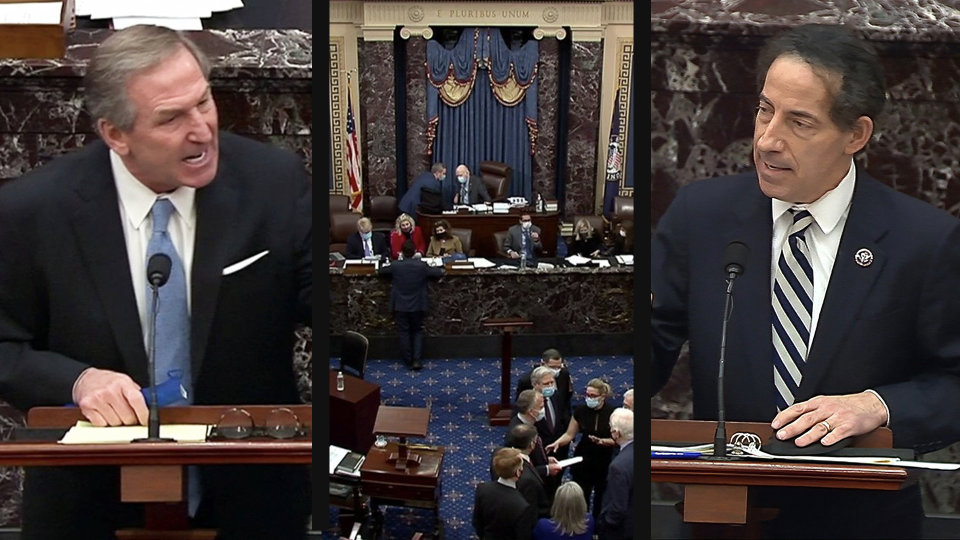 His impeachment trial is playing out in his absence, but it is as though he was there. A trial whose outcome we already know, like the first one, because it is more than likely that not enough Republican senators will join the Democrats to clear the necessary majority of 67 votes to convict Donald Trump for “inciting an insurrection.”

It’s as if he were there, watching the swarm of Republicans in the Senate, sucked in by the national populism of the master and taking a position that dangerously resembles that of the Capitol rioters on Jan. 6, Republicans supporting a position defended by Trump with his twisted freedom of expression argument and pretending that under the pretext he is no longer president, that the procedure underway against him is illegitimate and unconstitutional.

It’s as if he were there, looking at his two urgently recruited lawyers. One, Bruce Castor, a former district attorney, is known for having refused to charge actor Bill Cosby, whose trial ultimately took place in 2016, with sexual assault in 2005. The Washington Post reported that Castor specializes in cases of people unjustly accused under the #MeToo movement. In the opening statements of the Senate trial, Castor was chatty and disorganized to the point that he embarrassed the Republicans and even, one might say, enraged Trump, who was sitting in front of his television at Mar-a-Lago. Trump’s other lawyer is David Schoen, who has defended the Ku Klux Klan in the past and planned to defend the millionaire sex offender Jeffrey Epstein, who Schoen does not believe committed suicide in prison. Between Trump and his two lawyers, we sure have an eloquent community of intellect.

The paradox is that the case is fixed and we know beforehand that Trump will be, at the same time, condemned (by the Democrats) and exonerated (by the Republicans), but this political trial is nevertheless necessary, by the elementary principle of fighting against impunity.

The Democrats gave ample proof Wednesday, with a mountain of tweets and videos serving as support for Trump’s guilt: that is to say, that he played the role of “inciter in chief” the day of the riots and that he monitored social media for months watching the preparation for the attack on the Capitol; that he cultivated anger among his partisans by denying Joe Biden’s victory and crying from the rooftops for ever longer that if Biden were to be declared the winner, this would surely be because the main-in voting was subject to “massive fraud.”

What’s more, accumulated proof since Jan. 6 has unearthed a scandal showing multiple instances while Trump was still in office where there was collaboration among Republicans, elected officials, citizens and extreme right-wing paramilitary groups. The fabric of these relationships that was woven in the key state of Michigan is an alarming example. We remember Trump tweeting “LIBERATE MICHIGAN!” last April in support of the armed militia who opposed the quarantine measures imposed by the state government. A recent piece in The New York Times documents how this “call to arms” emboldened these militias and encouraged the Republican Party of Michigan to form a tight coalition with them. To quote a disillusioned Republican, it is as if the party were now deploying its own private army. That’s right. Several militia leaders from Michigan were in Washington on Jan. 6.

Encouraged by Biden, the congressional Democrats were right to want to wrap up the trial quickly and harshly, given the health and economic crises. A final vote could take place as soon as Sunday. But for all that, the events of Jan. 6 should not be reduced to a big miscellaneous news item in the eyes of the public, without awareness of its profound causes, as was the case with the attacks on 9/11. It could be said that, without the presence of their god in the White House, the dependency of the extreme right wing is losing its fervor. The fact remains, it is undeniable that Trumpian populism is a cancer that has metastasized.

It is Biden’s turn to hit hard in order to restrain the large populist seduction and demonstrate the efficiency of his government in the fight against the pandemic. He needs to apply decisive and progressive measures to battle inequality, racial injustice and the exclusion of rural communities — because Trump supporters do not boil down to just white, racist militants. He has barely two years to succeed, from now until the next midterm elections. Let us hope he does not make the same mistake as Barack Obama, who also had control of both houses in Congress at the start of his first term. He lost precious time in trying to get Republican cooperation on his health care reform project, in vain.

*Editor’s Note: On Feb. 13, the Senate acquitted Trump on an article of impeachment for incitement of an insurrection.

About Peyton Reynolds 21 Articles
I am a recent graduate from the University of Nebraska-Lincoln and an aspiring French translator who enjoys endless amounts of black coffee, good books, and hiking.