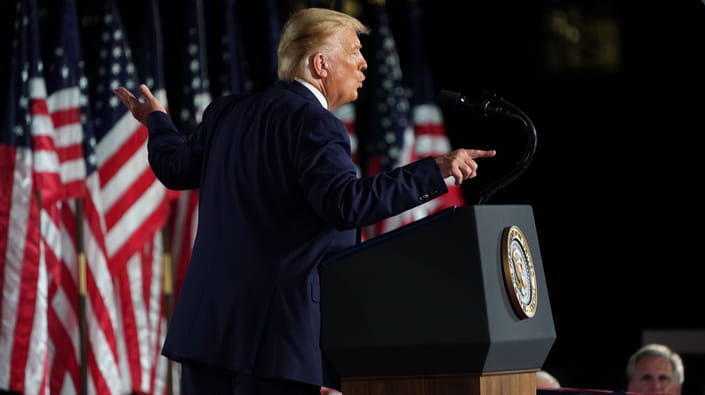 On the one hand, Trump’s supporters are happy that he was acquitted, while his opponents believe that he was once again able to avoid accountability. However, the acquittal itself does not lower the internal tension in the ranks of the Republican Party; rather, the acquittal increases it.

What are the chances for Republicans to overcome “Trump Syndrome,” and how long and painful will the healing process be?

The move for impeachment was prompted by the infamous events of Jan. 6, the day Congress was set to certify the results of the U.S. presidential election and the day hundreds of Trump supporters stormed the Capitol. As the result of this attack, the Senate and the House of Representatives halted proceedings. Five people were killed; many others were injured.

In the night of Jan. 7, Congress officially announced that Joe Biden had won the presidency. On Jan. 13, the House of Representatives impeached Trump for the second time. On the one hand, it would seem unwise to impeach a former president, but those who initiated the impeachment were deeply convinced that this was the way to protect the country from Trump’s abuse of power in the future.

The second Senate impeachment trial began on Feb. 9. Five lawyers who were expected to defend Trump quit on the eve of the trial. The former president did not testify at the trial.

The impeachment trial was based on a strong case by the prosecution, but a weak case presented by the defense. In its closing argument, Trump’s defense team condemned the violence on Jan. 6 and claimed that the former president had been tainted by biased media outlets and the victim of a protracted act of revenge by his political opponents.

Even though they conceded Trump was guilty, the rest of the Senate Republicans didn’t dare to vote for conviction.

In particular, immediately after the Senate voted to acquit, Senate Minority Leader Mitch McConnell delivered a speech criticizing Trump’s actions on Jan. 6. “There is no question, none, that Trump is practically and morally responsible for provoking the events of the day,” he said.

Party of Ideas or Trump’s Party?

In response to the Senate’s decision, Trump said, “Our historic, patriotic and beautiful movement to Make America Great Again has only just begun. In the months ahead I have much to share with you, and I look forward to continuing our incredible journey together to achieve American greatness for all of our people.”

The Senate vote demonstrated that the former president continues to influence the Republican Party. Winnie Stachelberg, executive vice president for external affairs at the Center for American Progress, noted that Trump will certainly continue to be a force within the Republican Party, and Republicans must figure out how to deal with that.

According to opinion polls, 48% of Republicans want Trump to remain head of the party. An even higher percentage of Republicans, 74%, want the former president to remain an active political player.

Naturally, some Republicans believe Trump has violated the party’s core values. In particular, Adam Kinzinger, representative for Illinois’ 16th Congressional District, argues that the party has lost its moral authority in many areas under Trump’s presidency, and it is time to restore the party’s true values. Kinzinger has launched the anti-Trump movement “Country First” to support his colleagues who openly oppose Trump.

And there are many who need support. These are not the best of times for the Republicans who voted to impeach or convict Trump.

For example, Sen. Romney has been attacked by local Republicans in Utah and was the target of a petition accusing him of being a “deep state” agent. The deep state is a conspiracy theory, according to which some U.S. politicians influence the decision-making process regardless of democratically elected leadership.

It is likely that the senators who voted to convict Trump may lose their seats in the next election. For example, Trump’s daughter-in-law, Lara Trump, is seen as the most likely Republican challenger for Burr’s Senate seat in North Carolina.

According to American policy adviser Lanhee Chen, who has served a number of prominent Republicans, the key challenge for the Republican Party will be to redefine itself and move away from loyalty to a single leader.

“When the conservative movement, when the Republican Party, have been successful, it’s been as a party of ideas,” Chen said, adding that “many Republicans are more focused on talking about [Trump] than about what’s next. And that’s a very dangerous place to be.’’

Sen. McConnell, who will become the de facto leader of the Republican Party for the next two years, made it clear in an interview that the only thing he cares about is winning the 2022 election. However, neither he nor his proponents can predict how Trump’s supporters will behave.

Maryland Gov. Larry Hogan, known for his criticism of Trump, said that “Trump’s final chapter hasn’t been written,” adding that he’s willing to fight a battle “for the soul of the Republican Party,” a battle, he said, “that could last for years.” Hogan believes that more Republicans would have voted to impeach or convict Trump if they had not been afraid of further confrontation with colleagues, which could end their careers.

Indeed, given Trump’s connections with donors, activists and representatives of numerous local Republican organizations, many Republican voters still see Trump as the party’s leader. However, according to Sen. Cassidy, the former president is already a waning force, and many other Republicans will soon share this view.

A possible defeat in the 2022 election would represent a “gift” for Trump’s supporters.

“If we come back in 2022, then, it’s an affirmation of your policies. But if we lose again in 2022, the narrative is going to continue that not only you lost the White House, but the Republican Party is in a bad spot,” said Sen. Lindsey Graham.

“It’s hard to imagine Republicans winning national elections without Trump supporters anytime soon,” said Alex Conant, a Republican strategist. “The party is facing a real Catch-22: it can’t win with Trump, but it’s obvious it can’t win without him either.”

Analysts predict various scenarios for the future of the Republican Party, from the creation of a separate faction within the party to the collapse of the party.

One week ago, according to Reuters, 120 former high-ranking Republican officials discussed forming a third center-right political party in opposition to the Republican Party, called the Center Right Party or the Integrity Party. About 40% of participants in the discussion support the creation of a new party, while other participants favor creating a separate faction.

Whatever the case, there is not much time left until the 2022 election.

The Grand Old Party, as Republicans are often called, needs to stabilize itself in less than 1 1/2 years so as not to begin a path to oblivion. However, in order to save the party, its leaders need to decide now how to respond to Trump’s challenge — no matter how difficult this decision may seem today.

The author, Svitlana Kovalchuk, holds a Ph.D. in political science and is the executive director of YES or Yalta European Strategy.