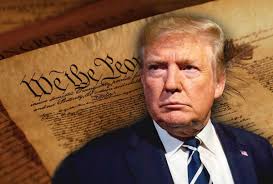 Based on a book by renowned American linguist Noam Chomsky, the documentary, “Requiem for the American Dream” reveals the socioeconomic problems that are rife in the richest nation on earth: the United States of America. The film pours onto the screen how a small oligarchy, through its power, manages to manipulate the country’s democratic dream, reducing it to a mere amendment expressed in its old Constitution. From this small oligarchy, a messiah emerges and commands the American state for a term that lasted four years, a messiah who failed to be reelected because he diminished the credibility of this same nation. This was Donald John Trump.

Under the key slogan during his presidential campaigns, “America First,” Trump managed to win thousands of supporters, collecting voter fodder, a group that was indoctrinated by Trump ideology that was far removed from popular sovereignty. One of his thousands of political targets was immigrants, whom he subjected to constant attacks, such as the attack he made during a meeting at the White House last May 16, when he said, “We have people coming into the country or trying to come in … These aren’t people. These are animals.” Such an attitude in itself already reveals great contradiction in a nation that was born in the cradle of democracy, though an Enlightenment-inspired Constitution that preached, above all, equality among men.

The decline of American credibility was also confirmed by the anti-democratic hatred Trump spread via social media, mainly Twitter. According to a New York Times article, “The Complete List of Trump’s Twitter Insults,” of the more than 11,000 tweets collected between January 2015 and January 2021, more than half were insults that defamed all those who opposed Trump’s positions. Some of the many targets included protesters (“thugs”), the media (“DISTORTING DEMOCRACY in our country!”) and political ideological movements contrary to existing movements, such as antifa, a left-leaning movement that was accused of being a terrorist organization without any proof.

As if that weren’t enough, Trump could not have ended his term in a less aggressive way, when, failing to be reelected and indignant about the situation, he declared victory and encouraged the most anti-democratic episode of his entire political career: the invasion of the Capitol on Jan. 6. A BBC Brazil correspondent asked a protester why Trump’s supporters were there, and he replied, “This man (Biden) … is going to take away the freedom we won.”*

Steven Levitsky, co-author of the book “How Democracies Die,” told BBC Mundo that this act “is a variant of what in Latin America we would call self-coup. It is a president mobilizing his followers to stay in power illegally.” Going forward, what is expected from Biden’s victory is an attempt to heal the open wound that the previous government deepened.