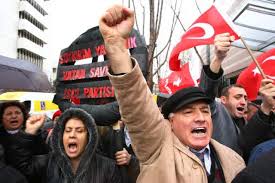 Citing an unnamed source, American news networks Bloomberg and CNN claimed that President Joe Biden told his Turkish counterpart, Recep Tayyip Erdogan, in a telephone conversation on April 23 that he was planning to recognize the Armenian massacre as a genocide and indicate that it was carried out by the Ottoman Empire in 1915. The report did not mention how Erdogan reacted.

There are still those in Turkey who ask what they would lose if Turkey apologized. Wasn’t there an apology already on Turkey’s behalf? These attitudes seek to divide Turkey and they serve Armenia’s goal of recognizing genocide and seeking reparations. On the other hand, look at what type of messages Vakıfay’s* founder and financial general secretary, Avedis Kevork Hilkat, himself a Turkish Armenian, posted on his Facebook page in an article entitled “I have an objection”:

“I find U.S. President Biden’s characterization of these historical events as a ‘genocide,’ and his meddling in Armenian affairs for the sake of U.S. regional politics, utterly unfounded and erroneous. We Turks and Armenians, with our own unique history, culture and civilization, lived in this territory for thousands of years in peace until you imperialist powers came on the scene. We lived in peace by influencing and being influenced by one another, by involving ourselves in each other, and living in complete solidarity.

“History shows us that it was not the Turks who viewed and attacked the Armenian community as cultural and religious enemies, trying to change and transform them over 2,000 years. Rather, we gather from the existence of many thousands of books written in Turkish with the Armenian alphabet that there was a cultural and religious fusion between the two societies. So, the opposite happened.

“In the last quarter of the 19th century, in an effort to protect their interests, the imperialist powers established a bloody and dirty center of operations as a buffer zone between them and another power seeking to enter the warm waters of the Black Sea from Anatolia.** The last act of this imperialist drama took place during World War I. Innocent nations were the victims of the war. In this bloody game, which continues today as it did in the past, Armenians, Turks and all the nations that live in this region were victims. Both history and geography attest to this.

“If you look at the issue politically, you imperialists turned everyone living in the region, including Armenians, against each other directly for your own interests. The people of the region have paid the price for your actions, as they have recently. You acquired your wealth and prosperity with the blood of innocent people.

Don’t try to claim victory with our blood. As brother nations, we can heal our own wounds with our people’s innocence. And so we should heal them.”

In addition to Hilkat, the claim of Gen. James Harbord, whom U.S. President Woodrow Wilson sent to Eastern Anatolia to investigate claims of genocide, that Armenians were massacred is not true. The region was not lucrative enough to require a U.S. mandate; there weren’t enough mines either. Let us recall a report that said the Turks, on the other hand, were determined in their national struggle.

In other words, the U.S. knows all of this very well, but is now applying all kinds of pressure on Turkey so the U.S. can assert control and navigate in the Black Sea. It seems so! This issue continues the debate over the 1936 Montreux Convention and the Kanal Istanbul project! Western imperialism persists and comes in many forms. This time, it is the United States trying to weaken Turkey by driving a political, cultural and historical wedge between Turkey and its neighbors, such as, at the moment, Armenia.

Armenian President Nikol Pashinyan, who had to resign after his defeat in Karabakh, incurred Russia’s ire by trying to follow American-driven policy in the region!

Turkey should evaluate the recognition of genocide allegations from these angles as well.

**Translator’s note: The author is understood to be making reference specifically to the imperial rivalry between Russia, and the British and French.