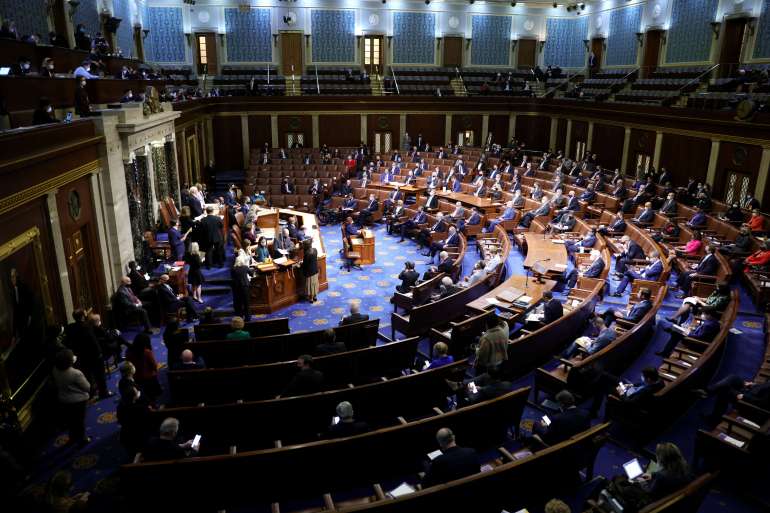 Since Israel was founded in 1948, American voters and political institutions have completely agreed in their support for the country. And throughout the history of the Arab-Israeli conflict, Congress has taken extreme positions in support of Israel compared to the positions taken by the White House.

Party affiliation among members of Congress makes little difference regarding the extent of support for Israel. Both Democrats and Republicans compete to show their support for Israel; this support is not conditioned on whether a Republican or Democratic president is in office.

Traditionally, the president and his team of advisers have been less eager to express blind support for Israel. In fact, on many occasions Republican and Democratic presidents have been forced to rein in Congress’ rush to support Israeli positions.

The current Israeli aggression with respect to the Palestinians is now evident, and the reaction among members of Congress from both parties within the Senate and House indicates an unprecedented switch in roles, with the White House showing greater support than Congress for Israeli aggression against the Gaza strip, Jerusalem and the West Bank.

On Monday, the House Foreign Relations Committee announced its resolve to send a message to the Joe Biden administration demanding the postponement of military contracts valued at $735 million for precision-guided rockets to Israel. The postponement will thus allow legislators to review the sale, which represents a departure from the narrative of Congress’ strong support for Tel Aviv.

The White House Is Being Confronted by Congress

Regardless of the party in the White House, Congress has taken positions in support of Israel, and has succeeded in issuing legislation committing the White House and the rest of the American government to policies cementing broad American aid for Israel, as is evidenced by the following.

Congress has determined it will preserve Israel’s military superiority over the Arab states. Congress has issued a number of bills that guarantee the continuation of Israeli military superiority over Arab armies by way of bilateral strategy, demonstrated by the fact it has offered Israel the latest weapons — which the American tech industry produces for Israel. This strategy comes first.

Over the decades, Israel has received the choicest and most modern American planes, such as the F-16, or the latest version of military aircraft, the F-35, without any protest from Congress. Rather, the decision was met with wide approval and calls to facilitate settling the payment for these planes or reducing their price. The U.S. further offered Israel financial aid to expedite these deals. Meanwhile, the Arab states received less developed versions of aircraft than those Israel acquired, and the Arab states acquired weapons years after Tel Aviv did. For example, aircraft arrived in Israel in 1978, but Saudi Arabia and Egypt did not receive planes until the end of 1981.

Indeed, on many occasions Congress blocked the issuing of developed weapons to allied Arab states. Among the most famous of these occasions in the 1980s, Congress attempted to block the purchase of AWACS planes by Saudi Arabia, which forced Republican President Ronald Reagan into an extended confrontation with Congress despite his party’s control over both houses of Congress. Nor was the sale of the F-35s to the U.A.E. exempt from the congressional guillotine, as Congress attempted to block the deal despite broad support for the Abraham Accords between Tel Aviv and Abu Dhabi.

Congress has pushed and welcomed generous aid to Israel since Israel was founded. The Center for Congressional Research Service estimates that Tel Aviv received $105.5 billion in American aid between 1948 and 2020.

Further, Israel automatically receives aid worth hundreds of millions of dollars each year to support specific programs, like funding the air defense system known as “Iron Dome,” and a system designed to find and target Hamas tunnels, and funding for scientific research programs conducted by Israeli technology companies.

But despite that fact that relations cooled between the two countries as a result of the courage former President Barack Obama showed in signing the Joint Comprehensive Plan of Action with Iran, Congress sought to pass an aid package valued at $38 billion for Israel over the course of 10 years as compensation for signing the agreement with Tehran.

Congress has continually pressured the White House to change policy that it has determined to be insufficiently supportive of Israel. This is true regardless of the political party controlling the majority in Congress, and the party affiliation of the president.

Among the most famous of this these actions is Congress’ recognition in 1995 of Jerusalem as the united and eternal capital of Israel, and its demand that the White House move the U.S. Embassy from Tel Aviv to the holy city. Each American president has, in turn, objected to this decision and used the power of the presidency to delay its execution for six months, having been renewed regularly by Democratic President Bill Clinton, Republican President George W. Bush and Democratic President Obama. But former President Donald Trump broke with this presidential tradition, transferred the U.S. Embassy to Jerusalem and recognized it as the capital of Israel.

Further, Congress pressured the Obama administration to reject the nuclear deal with Iran, and even extended an invitation to the Israeli prime minister from Republican and Democratic members to speak before a joint session of Congress in an effort to oppose the nuclear deal. Nevertheless, Obama was determined to walk down the path of signing the agreement.

Reasons for Broad Support for Israel in Congress

The nature of the American political system and the religious dimension among Evangelicals and Protestants facilitates broad support for Israel among the members of Congress.

Pro-Israel lobbies, chief among them AIPAC, play a big role in getting Congress to adopt policies and positions in support of Israel. One aid to a House representative was able to confirm to Aljazeera.net that “much of the legislation and speeches that congressmen propose relating to the Arab-Israeli struggle are written by AIPAC, which subsequently gets circulated among members to place their names on for adoption, pushing the other members to sign as well.”*

In addition, the fact that the House is divided into 435 congressional districts and the terms of representatives are limited to only two years turns the election cycle into a Sword of Damocles hanging over its members. AIPAC carefully monitors the voting trends of each member, aiding and funding campaigns to reelect supportive candidates or pumping funds to remove those opposed to its positions. The strength of this lobby differs among electoral districts according to the constituency of the candidates; nevertheless, it remains a crucial factor that members of Congress can’t ignore.

What we have seen in Congress since the beginning of the Gaza offensive does not represent an end to the broad support Israel has enjoyed within both chambers of Congress. However, at the same time, one cannot ignore or minimize the significance of the recent phenomenon among those who courageously reject Israeli policies and reject the manner with which the White House is dealing with the offensive and its consequences.

Some 28 senators among the 100 members of the Senate were inspired by the initiative of Jon Ossoff, the Jewish Democratic senator from Georgia, demanding a ceasefire between Israel and the Palestinians. Even before Ossoff’s move, a number of representatives from the House mobilized to demand that Biden take a stronger position forcing Israel to halt its offensive.

This new reality in Congress reflects a societal transformation in America among many liberal Democratic voters who share an increased awareness of the concepts of equality, systematic discrimination and racism, and thus connect the suffering of minorities in America to the suffering of the Palestinian people.

During the past two years, the House has witnessed the determination of two female Muslim representatives — Ilhan Omar from the state of Minnesota, and Rashida Tlaib from the state of Michigan. Despite sweeping attacks from the Jewish lobby and Trump’s support for their opponents, the two won a second term last November.

The female squad of progressives in Congress, which consists of Omar, Tlaib, African American Rep. Ayanna Pressley and the famous leftist Rep. Alexandria Ocasio-Cortez, together represent a major shift in the power of Congress to confront the White House, which has not moved forcefully to stop Israel’s aggression, which is, by and large, conducted with American weapons and ammunition.