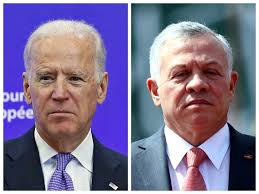 An article published by the British newspaper The Guardian mentioned the passing of security information to Jordan related to plans to stir up chaos in Jordan, which was done during the new American administration.

Washington was not there simply to protect an ally. When President Joe Biden was asked about what was happening in Jordan, he directed his words to the king publicly before reporters, saying, “Be strong, you have a friend here.”*

It’s clear from the announcement that the administration wasn’t surprised by any information regarding the inciting of chaos in Jordan, which proves that the Americans had previous knowledge of the entire situation and its details.

When the associates of the former president, especially Jared Kushner, entangled themselves in the entire Middle Eastern dossier, with the purpose of rewriting the regional map, they presented solutions at the expense of Jordan.

The Palestinian issue has an American dimension connected to the aspirations of the new administration to tarnish the reputation of the previous administration and strengthen its own image. The former president’s associates believed they had the ability to rule the world through the president, and thus recklessly fiddled with the security of allies in the region, which could have led to an untold number of repercussions.

The passing of information from the Americans to Jordan and the resulting investigation by Jordan achieved two goals for Washington. The first was to protect Jordan and strengthen the relationship between the two countries. The second, to internal American charges against the former president and his reckless son-in-law, who planned to redraw the map as he envisioned it if the president was returned to office. These maps required changes on many levels for Jordan (and perhaps the other Arab states) for the sake of protecting Israel.

The current American administration is also allied with Israel, but with conditions. Its coalition with Tel Aviv does not necessarily permit soft revolutionary plans that will lead to boundless chaos.

The relationship of the new American president with Jordan is a good relationship, and the king is supposed to visit Washington mid-summer. In fact, the American secretary of state was recently here in Amman against the backdrop of what the Palestinians have been suffering. The relationship with Washington is crucial for Jordanian diplomacy despite the fact that we expected there to be a bigger alignment with Jordan and the regional issues.

The American stance on Jordan is good, but it doesn’t seem sufficient, since there’s an economic crisis in Jordan that demands from the Americans an immediate reexamination of every form of support, whether it comes from America, European allies or other international sources. Were Jordan to remain weak in a region ablaze with conflict, it would be at a high cost to the security of the region. Those who analyze the details of the economic situation realize that the crisis is getting worse every day and requires a varied approach to treat it.

If Washington has specific standards to support its allies, then the reading of the political, economic and social situation in Jordan requires us to reexamine the entire system of support for Jordan, so that it’s more effective at addressing the reasons for the gridlock and anxiety at every level of society that we see popping up under various headlines on a daily basis.

What many don’t realize is that the last two years of the previous American president were very difficult years for Jordan, since the previous administration closed the door in Jordan’s face and political communication dried up; logistical communications weakened, except for a few matters. Further, the annual visit to the king didn’t take place according to the custom of previous American presidents, and high-level phone communications were cut off, since the president and his associates didn’t understand the balance of power. Their diplomacy knew only one strategy: Either do everything I say, or I’ll besiege you and choke you and plan to undermine you and your stability by any means.

Jordan breathed a deep sigh of relief with the departure of the previous administration. It’s unfortunate that the public here sometimes doesn’t believe that there are conspiracies on the grounds that Jordan is a strategic ally of the Americans. However, it’s also certain that

Donald Trump’s bilateral partner, Benjamin Netanyahu, was choking, pressuring and threatening Jordan with ease and without consequence. The organization of roles inside Jordan represents the lifeline confronting these dangers and conspiracies, since a cohesive and united interior is essential to permanence, strength and stability, over and above any support for this or that ally.

Yes, the the most secure situation and ally should be realized for us, Jordanians, now and not in some idealized future.