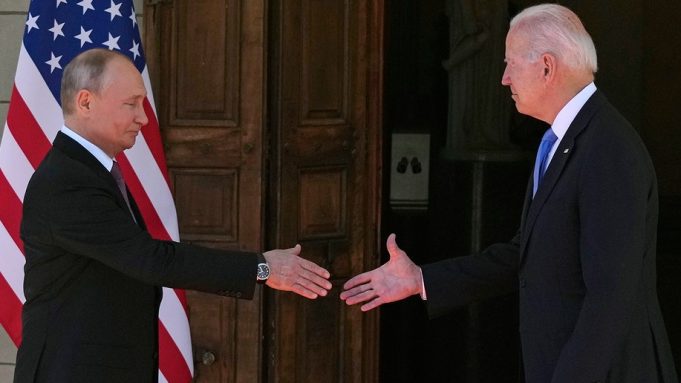 The spirit of Geneva is peaceful coexistence in the interests of global peace.

The main takeaway from the summit in Geneva is the U.S. and Russia have begun a face-to-face conversation. In addition, they have launched a dialogue on strategic stability and, in effect, restarted diplomatic relations, which were almost totally destroyed during the years of the sanctions war. Most likely, a format for the joint protection of cyberspace from hackers will be found.

One of the most surprising peculiarities of the public discourse in America ahead of the meeting in Geneva was the acknowledgment of Joe Biden’s inability to stand up to Vladimir Putin in one-on-one negotiations. Precisely such doubts were expressed three years ago as well, prior to then-U.S. President Donald Trump’s meeting with Putin in Helsinki.

When did it come about that Americans began to consider their presidents mentally incapable of tough and principled negotiations with a tough and principled adversary? What in the world kind of political system is it that thrusts upward leaders known to be inferior to their rivals in the key skills of a politician—achieving goals in the public interest through negotiations? Is it possible the absolutization of the role of institutions and their dominance over the factor of personality in politics leads to this? Or is it perhaps facilitated by the mechanism of pressuring rivals through sanctions, which operates on the principle, “If you’re strong, you don’t need to be smart”? It’s no coincidence that many observers — especially on Fox News — lamented that Biden’s weakness would be seen in Beijing, Tehran and Pyongyang.

A common factor discussed by analysts of various stripes on both sides of the ocean was the conclusion that Putin clearly won in the meeting with Biden. At the very least, no one could point to where he had lost or even made his position worse.

The brief era of American Democrats, with a helping hand from President Barack Obama, perceiving Russia as a regional power is over. Trump didn’t think so, but Democrats in Congress — and, most importantly, the mainstream media — stuck with Obama’s account. Yet the last 10 years have convincingly demonstrated that Russia is a great power in its ability to influence U.S. interests anywhere in the world. And take note: without nuclear weapons. And when Biden praised the face-to-face negotiation format in the interests of “predictable and rational relations,” he added “between two great powers.”

Ahead of Geneva, Biden gave a flattering description of Putin — “a smart, tough, worthy opponent” ]— thereby putting an end to the demonization of our president as a “man from a bunker” who had lost touch with reality. This approach was particularly popular with Putin’s radical political opponents inside Russia.

It appears that in Geneva, the first step was taken toward what might be called peaceful coexistence. On the day of the summit, many American experts reasoned as follows: of course, human rights and freedoms in Russia trouble us. But such was the case in 1945 and, perhaps, so it will be in 2045. This is a problem for Russian society. We absolutely must speak to the Russian authorities about this directly to their face. Yet we have pragmatic interests and concrete problems that demand a joint approach.

Putin used the press conference following the negotiations to acquaint the global and Russian public with a number of his noncontradictory narratives that explain many American grievances against us, from the opposition being foreign agents to cyberattacks emanating from the U.S., Canada and the U.K. A review of leading Western media outlets showed that the journalists to whom Putin told his version of the origin of the many points of tension didn’t acquaint their readers with his position. And since Russian journalists — in the spirit of liberal openness, transparency and free exchange of opinions — weren’t accredited at all at Biden’s press conference, we never found out whether he heard Putin’s arguments.

The meeting in Geneva on Biden’s initiative is a reflection of the fact that in the U.S., there are sensible forces ready to normalize bilateral relations. That includes influential economic players. In this phase of the global economic cycle, with a steady rise in the prices for oil and raw materials, the Americans have grasped that Russia will have a lot of money and sanctions would be shooting themselves in the foot. Putin will have a noticeable budget surplus for Biden’s entire presidential term. That means negotiating is necessary.

The most astute analysts and observers, finding no obvious reasons for such a meeting at the highest level, came to the conclusion that all of this is being done within the framework of a grand American strategy. And the grand American strategy is aimed at the systemic, comprehensive and long-term containment of China. For the success of this strategy, it’s fundamentally important to prevent an allied rapprochement between Beijing and Moscow. Everyone understands that as long as Xi Jinping and Putin are in power, pulling Russia away from China in favor of the West is next to impossible. But there’s no such thing as eternal leaders….