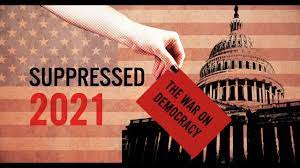 The recent wave of legislation restricting voting access in the United States represents an alarming campaign to destroy the foundations of democracy. Leading this movement is the Republican Party, which is, for all intents and purposes, targeting Black voters and other ethnic minorities, who traditionally support the Democratic Party.

Shortening the duration period for early voting and voting by mail, reducing the number of ballot boxes and tightening the rules on identification that must be presented when requesting a mail-in ballot: these restrictions have been the main focus of voting-related bills enacted in states where the Republican Party controls the state legislature.

According to an American think tank, 28 state laws on voting have been passed in 17 states, including the southern states of Georgia and Florida, and the western state of Arizona.

Many people who work in the service industry are restricted from voting on Election Day, while many low-income earners do not own a car or have a driver’s license to use as identification. These voting laws have been written knowing that the people most likely to be in these situations are ethnic minorities.

It is these false claims that have led the Republican Party to pursue voting restrictions.

The feeling of crisis within the Republican Party has also been bolstered by the loss of such strongholds as Georgia.

Not only did the Republican Party lose Georgia in the presidential election, but it was unable to win either of the two Senate seats in the runoffs at the beginning of the year.

President Joe Biden will continue to emphasize cooperation with allies who share the same values, such as Japan, so that the United States can confront autocracy as a leading democracy. At the same time, a movement arguably fueled by racism remains active in America’s own backyard.

It is, as Tim Cook, CEO of Apple and critic of voting restriction legislation, said, “American history is the story of expanding the right to vote to all citizens.”

Over time, American society has transcended many barriers, from the founding of the country, when voting rights were restricted to wealthy white men, to the introduction of universal suffrage. Voting restrictions stand in opposition to this progress.

The expansion of voting rights leads to a government that reflects the diverse interests of its people. Voter suppression should not be tolerated in the name of preventing fraud.