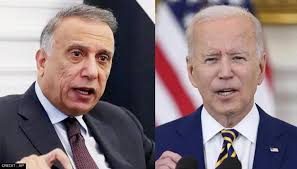 There is no doubt that all areas of life in Iraq have deteriorated since the U.S. invaded the country, overthrew Saddam Hussein, dismantled the Iraqi army and destroyed Iraq’s infrastructure. These changes have also turned Iraq into a failed state, leaving it prey to Iran. Moreover, it is apparent the country is under the control of pro-Iranian militias.

Yet, Iraq will remain a vital partner for the U.S. in the Middle East. As President Joe Biden put it a few days ago in a meeting with Iraqi Prime Minister Mustafa al-Kadhimi, “The U.S.-Iraq partnership has been real, and it’s consequential. And my administration is committed to strengthening that partnership.”

Many political analysts and specialists in American foreign policy in the Middle East welcomed Biden’s announcement. He declared that the U.S. will terminate its combat mission in Iraq before the end of this year. Meanwhile, America will maintain special forces assigned to a training and advisory mission in the country, while providing support and sharing intelligence with Iraq. Some argue that this decision is symbolic, but it is necessary and important for maintaining the U.S.-Iraq partnership. It also helps alleviate the anger of certain Iraqis, especially the Iranian-backed militias, who want to end the American forces’ combat mission in Iraq.

There is fear that Biden will fail to achieve this goal. In an attempt to return to the forefront after being dismissed by the U.S.-Iraqi agreement designed to develop a strategic partnership between the U.S. and Iraq, the pro-Iranian Iraqi militias may resort to military escalation. Moreover, during his visit to America, al-Kadhimi managed to sharpen and define the U.S.-Iraq relationship. This is considered a positive development, especially in terms of the U.S military and security cooperation, presence and support that Iraq currently needs. Iraq is not like Afghanistan, as the U.S forces in Iraq currently have a specific goal, which is to help train, advise and equip Iraqi forces in such tasks as confronting terrorist groups, especially Islamic State, a long-standing threat to Iraq.

The current U.S administration wants calm and a stronger Iraqi security force in Iraq. It also wants to empower the country to face the Islamic State group and the pro-Iranian Iraqi militias, and enable Baghdad to resist Iranian pressure.

The Iraqi government headed by al-Kadhimi does not want to engage in a battle against pro-Iranian Iraqi Shiite militias. Al-Kadhimi is frightened by the possibility of provoking a Shiite civil war despite his inability to confront the strong Iranian influence in Iraq. Therefore, he is very careful in choosing the right path to success in controlling the militias without prompting Iran to escalate its activities in Iraq. Before visiting Washington and meeting with Biden, al-Kadhimi consulted with many people and informed Iraqi political forces of the reasons for his visit to America. Moreover, al-Kadhimi’s policy is widely supported in Iraq, particularly his conviction that reconstructing and stabilizing Iraq requires America’s support and cooperation. He also believes that any escalation by militias will undermine his government and embarrass Iraq with respect to its international partners, especially the U.S. In addition, escalation is neither in the interest of the Shiite leaders, nor in the interest of Iran. To be continued.