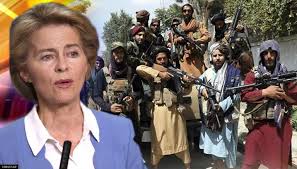 The Muslim community should be on the front line of opposition to the Taliban and try to create a region free of sanctuaries for terrorism, a region with a minimum standard of human rights and individual freedom for its citizens.

Unfortunately, the European political discourse on what is happening in Afghanistan is praiseworthy but insufficient with respect to humanitarian concerns. Ursula von der Leyen, president of the European Commission, visited the Afghan refugee camp in Torrejon yesterday. Of course, Pedro Sanchez was not going to miss a photo opportunity as the good Samaritan, after an embarrassing silence in his summer residence. While other leaders stood in their parliaments, provided information and explanations, or returned to official government headquarters, Sanchez did not waste a minute of his vacation … until this photo op.

But everything has a cost. For example, there is the fact that Spain is not mentioned in the statement that the U.S. secretary of state issued thanking allies for supporting the rescue missions in Kabul. The list is long. Uganda, Costa Rica and even Kosovo are there. Not a single word about Spain, but don’t miss that photo. It is true that the statement is unfair if we take into account the effort that Spain, its diplomats and its military are making in these critical hours. Behind this lies the diplomatic disaster of Sanchismo, unable to rebuild the ruined relations with Washington. Not even now, with Donald Trump, who was the excuse, out of the Oval Office. Given the situation, it is not surprising that La Moncloa spun a telephone conversation with Biden last night as an achievement.*

The Western public agrees that the Taliban’s takeover represents the failure of America and its allies to create a democratic space free from terrorism. What the public should not do is to engage in crossed accusations, as occurred yesterday. Western failure is already accepted and is becoming a mantra that oversimplifies the analysis of the immediate future, not only of Afghanistan, but of the entire region and of global jihadism. Until now, all the uncertainties caused by the Muslim world have always been seen as related to the West, as if Western democracies should answer. If the allies have failed in Afghanistan, now is the time for the countries of the region and, primarily, the Muslim community to isolate the Taliban, both in theory and in practice.

Europe must show solidarity by welcoming all these desperate people. Undoubtedly, though, Europe cannot bear the entire burden. Afghanistan is surrounded by Muslim countries, with two powers on each side, Iran and Pakistan, and three former Soviet republics to the north, Turkmenistan, Uzbekistan and Tajikistan. The Taliban’s return to power marks a turning point in allied intervention policies. The theory of the U.S. neoconservatives, turning countries that pose a threat into democracies by force, has not worked. It is the Muslim community that must now demonstrate whether it can create a region without sanctuaries for terrorism, and whether it can provide rights and freedoms for its citizens, especially women.

Critics of the allied intervention should look past their disagreements. If one thing has become clear, it is that only military deterrence has allowed Afghans to live two decades in relative freedom; as soon as that deterrence disappeared, so did freedom. With the Taliban in power, Afghanistan will not be a state, but a territory that is nothing like a political government. Its Muslim neighbors must not be oblivious to this, but prove that they can do something other than watch the oncoming tragedy.

About Sergio Ferreras 20 Articles
Hi! My name is Sergio and I come from Spain. I am new here, but eager to start contributing and learning from the great people at Watching America!