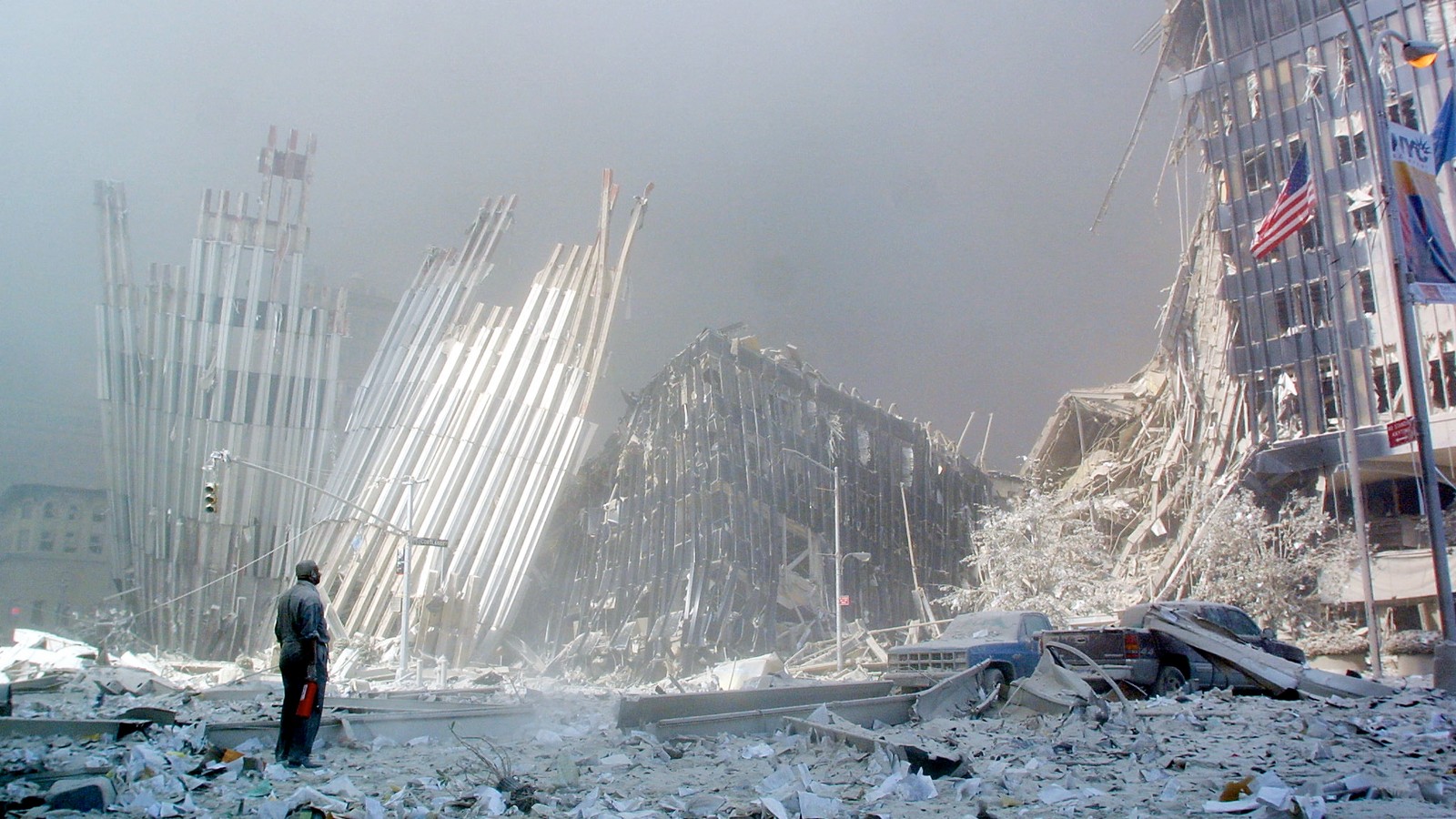 The terrorist attacks on Sept. 11, 2001 made the world a darker place. The wars that followed didn’t make it any better. The world was never the same again.

There’s a lot of waiting that happens in war. Once, while waiting in one of the many military airports and bases the United States used in and around Iraq, I was approached by an older man. His name was John and he said he had a book he wanted to give to me. It was a meticulously crafted photo album about the terrorist attacks on 9/11 and what they did to New York.

John wanted to help, to contribute, to do something for his country after the attacks. He did what many others did, both when the U.S. went into Afghanistan in 2001 and when the country invaded Iraq in 2003: He enlisted in the U.S. Army.

The United States had been attacked.

They wanted to do their part.

John was sent to Iraq.

“What does Iraq have to do with the terrorist attacks in 2001 though?” I asked, but didn’t really receive any clear answer.

The War on Terror

Many of those who were in New York and Washington, D.C., the day the planes crashed into the World Trade Center and the Pentagon, describe the sky as having been exceptionally clear and blue.

You could say there’s a figurative meaning to this, too.

Nobody was prepared for something like the attacks to happen; nobody had considered that the United States could be hit in such a way. The devastation was enormous.

It is still the worst terrorist attack in history.

The Shock and Reactions Afterward

Overnight, the whole mighty government apparatus of America shifted gears to fight against a new enemy. The war against Islamic fundamentalism and terror had begun.

The World of Yesterday

It’s worth remembering how the world looked on Sept. 10, 2001. President George W. Bush had been in office for a little over half a year, following a contested presidential election that ended in court.

The United States was unquestionably the most powerful nation in the world, without rival. The country had won the Cold War. Russia was in chaos and had just assumed a new leader, Vladimir Putin. China’s economy was only slightly larger than Italy’s.

The signs were there, though, for those who wanted to see. The American Embassy in Nairobi was hit by a terrorist attack in 1998 and the World Trade Center parking garage was bombed in 1993.

However, Islamic terror was still just a part of the bigger picture when it came to threats against the U.S., and was not the main enemy, as it became the day after 9/11.

It soon became clear that the terror network, al-Qaida, was behind the 9/11 terrorist attacks, and that it was based in the Central Asian country of Afghanistan. Up until then, the country had mostly received attention because of the hair-raising human rights violations carried out by the Taliban, who controlled Afghanistan.

The United States mobilized an international coalition, and the war went well. The Taliban were removed from power; al-Qaida and its foreign fighters were either killed or forced into hiding. The one blemish on the military’s success was that the brains behind the attack, Osama bin Laden of Saudi Arabia, had managed to escape.

It wouldn’t stop there.

President Bush gathered a circle of advisers who had much bigger plans. They wanted to remake the whole world in America’s image. They were called neoconservatives and they wanted to use the military to facilitate regime changes in other places in the Middle East. The 9/11 terrorist attacks gave them latitude, and Iraq, which was under the control of Saddam Hussein, became a new target.

With claims that later proved false that Iraq was producing weapons of mass destruction and that Iraq had strong ties to al-Qaida, America went to war again, two years after the terrorist attacks. This time they went in without the approval of the U.N. and with only a handful of allies, including Great Britain.

This war also went well in the beginning. American forces and their allies took control of the capital, Baghdad, after a flash war, and some months later, Hussein was captured.

Things began to get difficult later, and it was after the war became complicated that I met John with the photo album. The United States was supposed to build a new government in Iraq, but it was constantly attracting new enemies and was being attacked by militia groups from all sides. The Americans lost many soldiers every day.

Moral and legal justification for the war in Iraq was contested from the beginning, but after months and then years without finding any evidence that Iraq had produced weapons of mass destruction, even the most ardent defenders of the invasion began to lose confidence.

John was actually a dentist and was afraid of dying in the war. I met him on a base in Kuwait. He said he wasn’t really sure what Iraq had to do with the 9/11 terrorist attacks, but he talked a lot about Hussein and Hussein’s sons, and how cruel they had been. He compared them to Caligula, the mad Roman emperor. Considering the shaky basis for the invasion, it’s not surprising that John couldn’t give a real answer.

The United States withdrew from Iraq some years later under President Barack Obama. However, the U.S. returned in 2014 to take down the Islamic State, a terrorist group that threatened to take over the country and that had carried out large terrorist attacks in Europe. The core of this group was established in an American prison after the invasion of Iraq.

Now recently, in the late summer of 2021, the U.S. has withdrawn from Afghanistan and left the country to the Taliban once again. During the evacuation, a suicide bomber attacked amid the chaos around the airport in Kabul and killed more than 100 Afghans and 13 American soldiers.

The interior minister of the new Taliban government was presented Tuesday. Sirajuddin Haqqani is a man thought to have tight bonds with al-Qaida and someone who carried a $5 million bounty imposed by the FBI.

It’s difficult to see how the war on terror has been a success. That the world hasn’t experienced such an extensive attack as the one that happened on Sept. 11 in the last 20 years is probably due more to security measures and surveillance than military campaigns.

Tens of thousands of people have lost their lives in the wars and conflict that followed, and the world became a much more brutal place for all of us after that September day 20 years ago.

I don’t know if John survived the Iraq War. I kept the album he gave me.

I can’t bring myself to get rid of it, maybe because so much of our world is still defined by the tragic event, but also because the book symbolizes much of what went wrong in the days that followed.

About Jennifer Juveth 11 Articles
Jennifer Juveth is an American who has been living in Norway since 2013. She has a Bachelor of Arts in Linguistics from the University of Oslo with a minor in English. She is married to Gaute, and her interests include language, history, travel, writing, reading, swimming, and sewing.