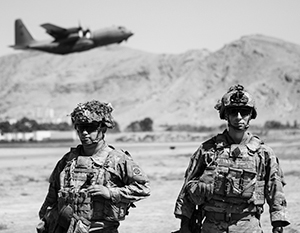 Shock, confusion and bewilderment; this has generally been how the international media and political scientists have reacted to the U.S. president’s announcement proclaiming “an end to America’s longest war,” and rejecting the idea of planting democracy in countries with bombs. Why has Washington made this decision, and what will America begin to do instead?

On Sept. 1, Joe Biden delivered a major speech taking stock of the war in Afghanistan. However, Biden’s main point was not to justify the withdrawal, but to address the conclusion he drew from the failure in Afghanistan.

“This decision about Afghanistan is not just about Afghanistan. It’s about ending an era of major military operations to remake other countries. We saw a mission of counterterrorism in Afghanistan, getting the terrorists and stopping attacks, morph into a counterinsurgency, nation building, trying to create a democratic, cohesive, and unified Afghanistan, something that has never been done over the many centuries of [Afghanistan’s] history. Moving on from that mindset and those kind of large-scale troop deployments will make us stronger and more effective and safer at home,” the president stated.

According to the Polish Gazeta Wyborcza, Biden has proclaimed “an end to America’s great wars.” Truly, Biden’s statement is a public rejection of policies that imposed democracy and liberalism on countries, something the the U.S. has occupied itself with not just in the period following the Cold War, but since World War II.

Such a resounding statement as Biden’s evoked an equally resounding response of mistrust and optimism, but mostly confusion about what happens now.

Naturally, some people do not trust Biden. The internet is full of phrases that make reference to “another American deceit,” and assert that “the U.S. will never stop exporting democracy on the wings of bombers, it’s the U.S.” It is like the scorpion in the popular fable that says as it stings the frog it is ferrying across a river and they’re both sinking, “I couldn’t help it. It’s in my nature.”

Reluctant optimists see opportunity in Biden’s words. “This is close to being a sensation, because, if it’s not rhetoric, it implies a rejection of the regime-change policies which have been the foundation of the U.S.’s international strategy. In the case of a genuine refusal by the U.S. to attempt remaking other states, this will mark an end to American military interventions in different countries and qualitatively change the U.S.’s international role,” says Russian Sen. Alexey Pushkov. Pushkov’s reluctant optimism along with other commentators is related to the fact that since the war in Yugoslavia, the forceful exportation of democracy has not brought the United States any success, only failure, which has drained American resources and caused colossal damage to the American image.

And yet another sensational issue is the fact that Biden has virtually agreed with the very person whose policies he once categorically rejected.

Unsurprisingly, “Liberal Europe is in shock … because of Biden’s statement about the end of the age of military reorganization in other countries. Liberal Europe always supported American regime-change operations with such enthusiasm! And now it senses it’s been betrayed. By whom? By the president of the chief power of the Western world, of the chief guardian of the doctrine of a liberal world order, of the bulwark nation of liberal values that the liberal European elite always worshipped,” Pushkov writes. This from the president who, after he took office, declared that “America is back.”

“This calls into question the whole conception with which the German government and opposition parties have justified missions like Afghanistan until now. In short, their credo consisted of the following: military force is bad from an ethical point of view. Its use as a last resort for the defense of citizens may be unavoidable, but in order to justify it, the West must help the damaged nation rebuild, which includes the construction of democratic institutions modeled after those in the West. However, Biden precludes even this more modest goal of ‘institution building.’ In his speech he turns the German mindset on its head, claiming it’s possible to resolve security problems through purely military means, and that this doesn’t imply any kind of obligation regarding reconstruction,” writes prominent German journalist and political scientist Christoph von Marschall.

Now that Biden has rejected the forceful imposition of democracy in other countries, Europe has a choice. The EU could ideologically change direction and shift to engaging in pragmatic relationships with those countries where domestic politics do not quite suit it; for example, in Belarus or Russia. The problem is that such a change requires willpower and flexibility that believers in liberalism don’t have. Or, Europe could take up the mantle discarded by Americans and engage in coercive democratization by itself. The problem here is that actual troops are needed, which Europe, weakened in more ways than one, does not have.

Of course, Europe might not take up the mantle and shift direction, but then it will end up on the sidelines of, or even isolated from, history. In the end, changing direction would still be necessary, but with far greater losses. “Cosmopolitanism, which for years has comfortably spread in several European governments, might not be dismantled until it’s too late,” says Thomas Jaeger, a professor at the University of Cologne.

Then again, Europe can make another choice. It can simply adapt to America’s new foreign policy and recognize that its purpose is not total isolationism, but the same globalism from before, only executed by far more intelligent means than military intervention.

“Biden once stated that all foreign policy measures must be directed at two goals: how they reinforce democracies, and what they bring to American workers,” Jaeger explained. Military intervention aimed at the implantation of liberalism and the reconstruction (or construction) of states in the American image in no way achieve those two specified goals. American workers (with the exception of those working in the defense sector) suffer when budgets are devoted to war and nation building, and not to the development of infrastructure and the stimulation of U.S. industrial production.

As far as democratization, not only has military presence not worked, it has led to exactly the opposite effect. The populations of occupied countries have rejected liberal ideas, and liberalism and globalism have been discredited across the entire world.

Let us recall that the goals of globalism and total democratization are by no means a struggle “for our freedom and yours,” as liberal believers say.

The goal is to create regimes that live according to the American model — that is, forming civil societies permeated by a network of nongovernmental human rights organizations, which makes it easy to influence the domestic or foreign policy of countries. Finally, the American model includes rehabilitating populations and cultivating their reverence and adoration for the American way of life, thereby guaranteeing that those populations will be loyal to America.

Not only have military interventions not accomplished these results, they’ve essentially contradicted the main goals of American foreign policy. This is exactly why Biden is changing the vision and instruments of democratization. He is rejecting fear in favor of the most effective incentive in history: temptation. The United States is returning to the classical conception of soft power. It will democratize regimes not with bombs, but through economic, ideological and cultural influence; influence that, let’s not forget, helped the U.S. take over Eastern Europe, a number of post-Soviet territories and parts of Latin America and Southeast Asia.

Yes, it has been a while since the days of these great victories. However, American opportunities in the arena of soft power are still very great.

As Politico writes, “We are still blessed with an extraordinarily favorable geographical position, as a continental nation with friendly neighbors to the north and south, access to two oceans, and enormous reserves of oil and gas and vast amounts of arable land. We produce about a quarter of global GDP. We spend much more than any other country on our military, responsible for an astonishing 40 percent of all military spending. We dominate the list of top universities in the world. If American cultural power has declined over the decades, it is still considerable. American workers are more productive than workers anywhere else. Our alliance system is an enormous force-multiplier, a network that, according to author Michael Beckley, “encompasses 25 percent of the Earth’s population and accounts for 75 percent of world GDP and defense spending.”

The big question now is whether or not America, accustomed to launching bombers at the first sign of trouble, has unlearned how to make use of its soft power.