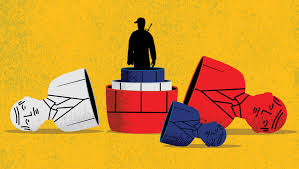 Terrorism from the extreme right could victimize the United States on its own soil.

On 9/11, al-Qaida, led by Osama bin Laden, conducted a series of terrorist attacks on the United States. There was no precedent for the number of victims, some 2,977 people, nor for the American government’s response.

Speaking to Congress, President George W. Bush promised to find, neutralize and defeat any and all “terrorist groups of global reach,” starting with al-Qaida. This is how Afghanistan entered the picture as part of the War on Terror.

The Taliban had governed Afghanistan since 1996. Domestically, the group had vied for power with the Northern Alliance, then led by Ahmad Shah Massoud. Two days before Sept. 11, al-Qaida assassinated Massoud. For the U.S. government, there was no doubt that the Taliban were sheltering bin Laden and al-Qaida. A few weeks after 9/11, Americans and their allies, along with the Northern Alliance, ousted the Taliban.

Ten years later, President Barack Obama announced that the U.S. had located bin Laden in Abbottabad, Pakistan. Bin Laden died after an exchange of fire with U.S. Navy soldiers in an operation to capture him. However, the war in Afghanistan continued for another decade.

We are still revising the balance sheet in the conflict. The Taliban, with whom former President Donald Trump reached an agreement for the U.S. to leave Afghanistan, have returned to power. Organizations like al-Qaida which, according to the U.N., continue to be connected with the Taliban, will probably use images of Kabul airport in its propaganda. The Islamic State adds fighters to its ranks who threaten any current possibility of geopolitical stability in the region. However, for President Joe Biden, the U.S. has “achieved [its] objectives” with the war in Afghanistan: preventing a terrorist attack on American soil. He neglected to mention, however, the growth of terrorism from the extreme right in the U.S.

We understand this terrorism of the extreme right as the threat or use of violence based on a spate of discrimination, prejudice and hatred, including, for example, racism, sexism, LGPTQIAP phobia or one of the major consequences of the War on Terror, Islamophobia.

The Center for Strategic and International Studies, considered the best think tank in the U.S. and internationally, conducted a study of terrorist attacks that occurred on American territory between 1994 and 2020. According to CSIS, about 57% of the incidents could be categorized as terrorism by the extreme right.

For example, in 1995, Timothy McVeigh detonated a vehicle full of explosives next to the Alfred P. Murrah Federal Building in Oklahoma City. The bombing killed 168 people. In 2015, Dylann Storm Roof shot his way into the Emanuel African Methodist Episcopal Church in Charleston, South Carolina, massacring nine people. Given the cases of McVeigh and Roof, there are those who warn that the “next 9/11” will have its origin among the American extreme right.

But there is least one major obstacle in fighting the terrorism of the extreme right. Former FBI agent Michael German wrote a report titled “Hidden in Plain Sight: Racism, White Supremacy and Far-Right Militancy in Law Enforcement” in which he detailed the activities of extremists who worked as law enforcement officers. Examples include cases involving Ku Klux Klan sympathizers. Should it occur, the war on terror of the extreme right, beyond just fighting for human rights and avoiding a repeat of the abuses at Guantanamo prison and elsewhere, will need to start at police stations.

Editor’s note: This article is available in its original Portuguese through a subscription.