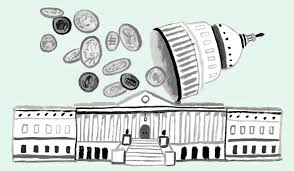 In a volatile Congress, confrontations between parties and among the Democrats themselves risks more losers than winners.

In a game of chicken, two strong-willed people risk catastrophe in order to show that they are the better of the two.

For example, two motorists speed toward each other and the first to turn is the “chicken.” In a scene from the James Dean film “Rebel Without a Cause,” two protagonists race toward a cliff and the first to jump out of his car is the “loser.”

If everyone insists on playing hardball or if something unexpected happens, it will only end poorly.

This game is quite popular in Washington nowadays. Whether it’s a question of increasing the debt ceiling, financing the government or the mega-bills on infrastructure, many politicians seem more interested in showing their steadfastness than in compromising for the general interest.

However, if it is risky to engage in this kind of game, then it can become downright dangerous to play several simultaneously, as is the case at the moment.

Bickering at the Edge of the Abyss

Last week, Republicans blocked a bill aimed at keeping the government running and raising the debt ceiling (in order to avoid, as well as other minor inconveniences, a global financial crisis).

Normally, this is routine. Under the previous government, the Democrats never blocked the raising of the debt ceiling and the only government shutdown occurred when Donald Trump insisted on financing his favorite wall.

An emergency bill should avoid a government shutdown, but like the sword of Damocles, a vote on the debt will hang over the financial system until the mid-October deadline.*

The other game of chicken is over two immense omnibus bills. Progressive and moderate factions of the Democratic Party find themselves in opposition. The stakes are enormous and the game is hard.

The progressives introduced a program of social and environmental innovations worth $3.5 trillion, which the Republicans oppose en masse. It therefore requires unanimity among Democrats to be adopted, but some moderate Democrats want to reduce its scope.

In order to prevail, the progressives in the House of Representatives have threatened to sink the $1.9 trillion bill for investment in physical infrastructure already approved by the Senate, if the Senate Democrats don’t approve the more ambitious bill.

If no one gives in, Joe Biden’s approval rating risks going even lower. The leader of the Democrats in the House, Nancy Pelosi, has decided to defy her party’s left wing by forcing through a vote on the infrastructure bill first.

The path that will lead to a compromise is fraught with pitfalls for the Democrats, who should make the absolute most of their small majority, but who risk finding themselves with nothing at all if the ambition of each faction prevails over the interest of all.

*Editor’s Note: On Oct. 7, the Senate reached a tentative deal to extend the debt ceiling until mid-December.