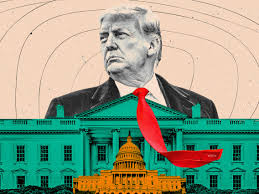 Donald Trump will be a candidate in 2024. The expectation that his influence would fade is a baseless illusion

“The United States is heading into its greatest political and constitutional crisis since the Civil War, with a reasonable chance over the next three to four years of incidents of mass violence […] and the division of the country into warring red and blue enclaves.”

So begins an explosive, recently published article in The Washington Post by Robert Kagan, who, until 2016, was one of the most influential foreign policy strategists in the Republican Party.

His analysis addresses issues that, lamentably, we associate with the most fragile democracies of Latin America, well known for their propensity to self-destruct. Kagan’s analysis is a landmark study recognizing the Latin Americanization of politics in the U.S.

His conclusion rests on two pillars. First, that Donald Trump will be the Republican candidate for president in 2024. The expectation that his presence andy and influence would fade after losing the 2020 election is a baseless illusion.

Trump has the money, the political machinery and millions of supporters. Additionally, in 2024 he will face politically vulnerable opponents. Trump may have legal and health issues that could prevent him from participating in the next election, but to act on that assumption is magical thinking, not political strategy.

According to Kagan, the Republican Party is no longer defined by its ideology but instead by its loyalty to Trump. Party leaders who do not unconditionally support the former president are summarily marginalized and ferociously attacked. The second pillar is that Trump and his allies are preparing to secure electoral victory through undemocratic means, if necessary.

The crude and failed attempts to use lawsuits to give Trump the votes he needed to beat Joe Biden, as well as the media and political theater that has ensued to convince the country that the election was stolen, will no longer be crude or improvised. A sophisticated, warlike and very well-financed project is underway, aimed at controlling the electoral process in key states and the counting of votes, as well as redefining state authority with the power to declare who won the election in each state.

“The stage is thus being set for chaos,” Kagan writes. “Imagine weeks of competing mass protests across multiple states as lawmakers from both parties claim victory and charge the other with unconstitutional efforts to take power. Partisans on both sides are likely to be better armed and more willing to inflict harm than they were in 2020.”

Kagan raises his voice against tendencies that are new to the United States but not to Latin America. He has the merit of clearly realizing that strongmen like Trump do not do politics democratically, and yes, that they systematically use irregular tactics to accomplish their goals.

Asymmetric warfare is an armed conflict in which one of the parties has a considerably greater amount of military resources and capacity than its adversary, who resorts to unconventional strategies, tactics and rules. In 2015, Trump did not have a party willing to take him to the presidency, but he had a willingness to break all the traditional rules and schemes of politics, surprising and disorienting his rivals. Diving into asymmetric politics not only allowed him to take over the Republican Party, but the presidency of the United States as well. And even though he was not reelected in 2020, his success as the leader of a movement that feeds on political asymmetry is unquestionable.

What is there to do? How is it possible to strengthen American democracy and prevent leaders with anti-democratic tendencies from coming to power? Paradoxically, the best way to face the asymmetric politics that gives electoral advantage to demagogues, populists and charlatans, is not to imitate them. Attacks on democracy must be fought with more and better democracy. The world’s democracies, and America’s democracy, must be repaired and reformed urgently so it can respond to new realities such as pandemics and to old malignancies such as inequality.

But before one can talk about concrete incentives to defend democracy against asymmetric attack, we have to create a broad consensus on the gravity of this threat. The asymmetric attack on democracy is not “more of the same.” It is a different political phenomenon with many new aspects. To defeat it, it is necessary to understand it, to create awareness of how toxic it is and give this threat the priority it deserves.

I hope this is possible.