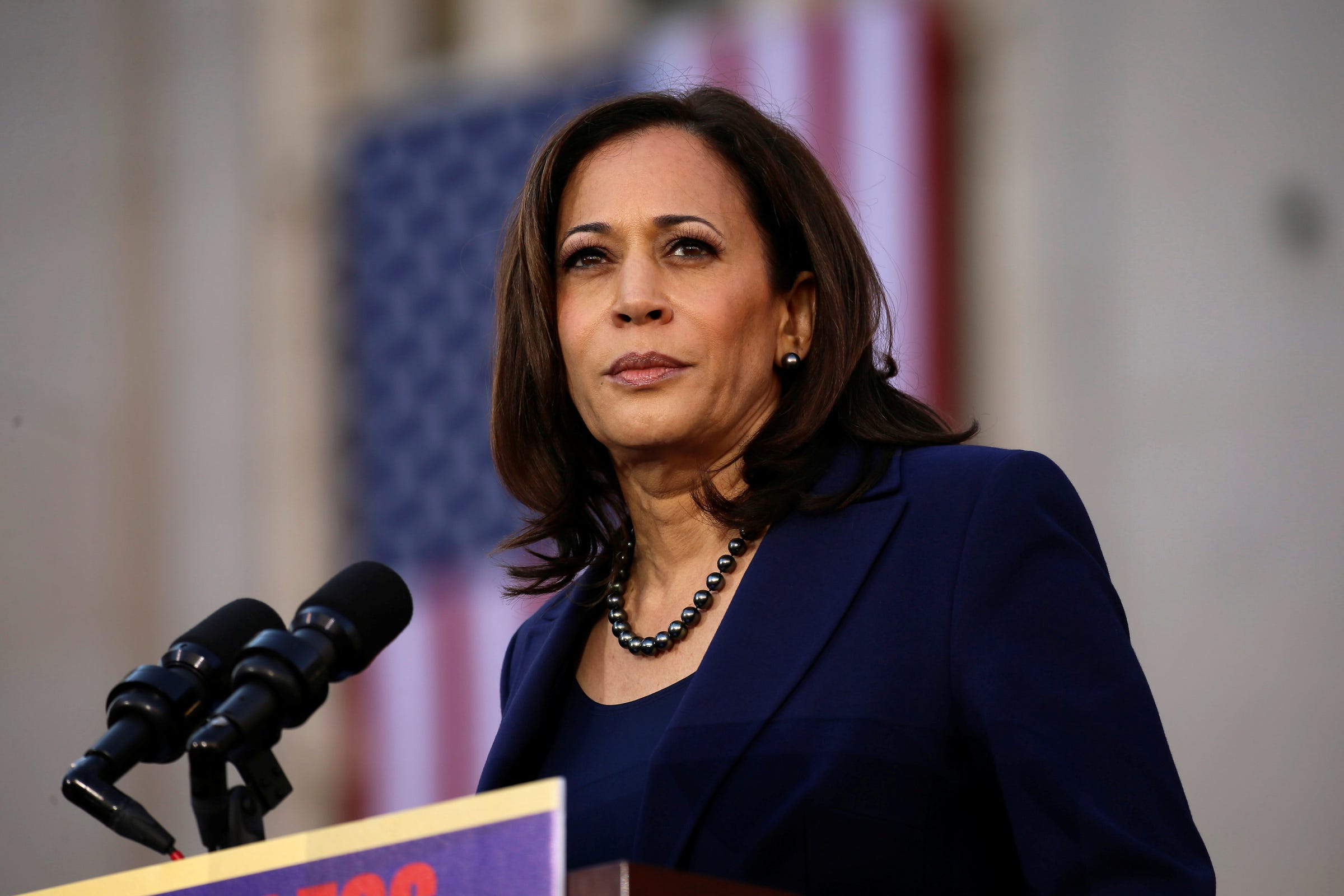 Expectations are enormous, the reality is rough. Kamala Harris is still struggling after nine months in office. That has something to do with Joe Biden.

The snipers do not really need their scopes. The roof of the former rescue squad site is not very high; the parking lot that needs to be surveilled is small. Nothing about this backyard is expansive or even glamorous — even though the vice president is coming today. But being vice president of the United States is a red carpet job less often than the title suggests. Pros do not need a red carpet anyway, and Kamala Harris is a pro. Taking the stage as the sun sets, with no more than a few people seated around her, the audience spontaneously starts singing “Happy Birthday.” Harris turned 57 years old the previous day. There was a cake in the White House; in Dumfries, Virginia, there is a not very loud, somewhat off-key serenade. Harris laughs her laugh, which is not rehearsed, which may not fit so well with the perfect images that U.S. politics often produce, but which thus makes her so great on this small stage.

On this early evening only about a half-hour car ride from the White House in Washington, D.C., Harris shows a second quality. She has not been speaking for very long — campaigning for the Democratic candidate for governor in Virginia, Terry McAuliffe, who is hoping to be elected in early November — when the audience grows restless. A few climate activists have come. A few voices can be very loud in such a small crowd, and they yell at Harris and protest a planned oil pipeline. They demand more climate protections from the government. Things get hectic for a moment, the Secret Service hurries in, and everyone is distracted from the actual purpose of the event.

Until Harris takes control. She raises her voice without yelling and speaks energetically, without exaggerating. “We will not be distracted. We will not [be] dissuaded. We will not be deterred. This election is too important,” she says into the microphone. All attention turns back to her. And she holds it until the end. It is a fleeting moment, but it shows how Harris, ever the pro, can play it up and what a strong will she has. These qualities are needed in the backyards and on the red carpets of the U.S. — to be the first woman and the first person of color to hold the office of vice president after 48 white men.

The rest of the event proceeds as planned: a concise speech, a closing photo with the candidate standing on the few steps leading down from the stage. As the snipers pack away their scopes and the people put away their campaign signs, Harris is already on her way back to Washington. Her days are full, and certainly not many things are as easy to check off as helping in an election campaign for her party. Although the vice president is always found in the shadow of the president, there may be no one who has been more overshadowed in this role than Harris.

She Is Scrutinized More Closely than Others

One reason is that she is the first female vice president since the office was first occupied in 1789. That fact is roundly exploited. Harris used it to her advantage in her campaign. She spoke about Joe Biden’s “audacity to … select a woman as his vice president” when Biden won last November. Opponents, however, used Harris’ gender and skin color to attack her in any way possible because there are still enough people who do not want to see anyone but a white man be vice president number 46 either.

In addition, Harris is under closer scrutiny than other powerful vice presidents before her — for example, Dick Cheney in George W. Bush’s administration — because Biden is president. The 78-year-old is the oldest president the country has ever had. Since Biden added Harris to his team, there has been speculation that she will be the 2024 Democratic candidate for president and that Biden will serve only one term. But there is no guarantee. One can certainly imagine Biden seeking for reelection — and Harris is still struggling in her role nine months after taking office. There are rumors about a badly managed office and problematic work conditions. Since the beginning, there has been a debate over how Harris can make a name for herself in her office and in her role within the Democratic Party.

There are two issues above all for which Harris is responsible. And both are, from a strategic perspective, no-win issues. Biden, for now, has assigned her the immigration and border control policies. From October 2020 through September 2021, immigration officials have arrested more than 1.7 million people on the border with Mexico, the highest number in three years. It is a gift to the Republicans that lets them portray the Biden administration as incompetent and ineffective, and stir up fear of mass illegal immigration into the country. Harris waited for some time before making her first trip to the border; she went to El Paso in late June, in part because pressure from the Republicans was so great.

Can Kamala Harris Be President?

Of course, she did not have a solution to the difficult immigration situation when she arrived. ”If you want to deal with a problem, you can’t just deal with the symptom of the problem, you’ve got to figure out what caused it to happen,” she said at the time. There are no positive headlines to glean from that; it is not something that will make Harris shine. Political capital is much easier for Republicans to gain in this case. When the next disaster loomed in Del Rio as thousands of migrants, mostly from Haiti, waited to cross the border, only the secretary of Homeland Security was there. They are not images that the administration wants to be associated with.

Harris’ second core issue is also important, but hardly solvable. According to the American press, this is an issue Harris asked to take manage. Democrats want to strengthen voting rights; the For the People Act would increase voting access and make voting easy for all citizens at a federal level. That is precisely what Republicans in certain states are trying to prevent with their own reforms. Here, too, it will be difficult for Harris to achieve a swift victory.

If Harris wants to raise her profile, she needs to be more visible at Biden’s side. She needs to have her own presence. The problem of every vice president is the dependence on the president. No one in this administration is more directly tied to him. Harris and Biden always emphasize how closely they work together; they consult with each other almost daily. But that also means that Harris is hardly able to act alone. Everything always happens in close concert with the West Wing. Other members of the Cabinet should not go behind the president’s back either. But Transportation Secretary Pete Buttigieg, for example, who is also a name often dropped when talking about the party’s future, has been able to build a much more independent profile in his role than Harris.

Since the Democrats have blocked Biden’s social agenda, Harris, like the president, has been touring the country to campaign for Biden’s program. The original plan was different. Harris ran for president last year. She quickly had to withdraw because of a poor showing in the polls. One of the reasons for that was that many voters had no clear idea of what the former California attorney general and senator stood for. This problem is not necessarily easier to solve as vice president. Right leaning media like The Daily Wire are already running headlines that declare Harris is the least popular vice president in 50 years. Polling about the vice president is actually less clear than the headlines would suggest. A recent Gallup poll found that 49% of people surveyed were satisfied with Harris. That is not a particularly high number, but for the first time since taking office, the president’s rating is even lower, at 43%. It will be a difficult balancing act for Harris to show loyalty to Biden and at the same time find her own voice.

She had fans in the audience in Dumfries. Hilda Thompson believes that Harris can be president. “She is empathetic,”** Thompson said. For Claudine Beckford, who came to the event with Thompson, the issue of voting rights is decisive. The 72-year-old is a regular volunteer in elections and views the Republicans’ reforms as an attack on democracy. “It undoes all of our progress.” She is putting her hopes in the Democrats and in Harris.

Voting rights may be the issue for Harris that, while it does not promise an easy political victory, mobilizes the Democrats in the upcoming elections. “Save our democracy” is certainly a good slogan to print on T-shirts and buttons. And it is a message that works well at an international level. There, Harris is increasingly emerging from the shadows; she has traveled to Central America and Asia. In November, she will take her third trip, to join other heads of state in France at an international conference on Libya. And she will give a speech at the Paris Peace Forum. The stages are getting bigger.

*Editor’s Note: This article is available in its original language with a paid subscription.

**Editor’s Note: These quotes, though accurately translated, could not be verified.