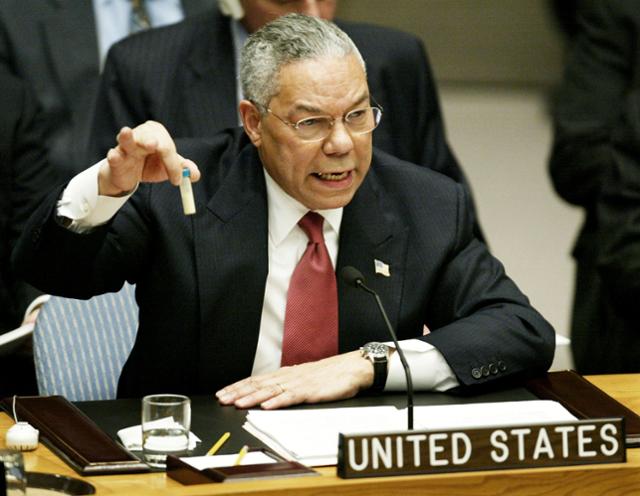 President George W. Bush believed Secretary of State Colin Powell, who held the public’s highest trust, was the perfect person to explain the need to invade Iraq. Thus, on Feb. 5, 2003, Powell delivered a speech about the invasion at the United Nations, a speech he strongly opposed and wanted to avoid. Powell spoke about how Saddam Hussein’s possession of weapons of mass destruction was something the post-9/11 world could not allow.

The U.S. State Department had drawn a blue curtain over Pablo Picasso’s painting “Guernica,” which hangs at the entrance of the U.N. Security Council. Guernica, a small Basque village in northern Spain, is where Adolf Hitler’s German air force tested its new high-performance incendiary bombs. Guernica burned for three days, killing as many as 1,600 civilians. Picasso’s painting depicts this act of brutality. The U.S. government did not find it appropriate to run televised discussions of an invasion of Iraq with “Guernica” and its strong anti-war message in the background. So Powell pleaded the case for the war in Iraq in front of “Guernica,” hidden by a blue cloth.

One month later, the U.S military launched its invasion of Iraq, but never found any weapons of mass destruction. Two years later, following his resignation as secretary of state, Powell told ABC news anchor Barbara Walters, “It’s a blot. I’m the one who presented it on behalf of the United States to the world, and [it] will always be a part of my record,” revealing how painful the U.N. speech was to deliver. Subsequently, Powell expressed his regret and apologies for the war in Iraq at every opportunity.

Powell died on Oct. 18 after testing positive for COVID-19. Major media outlets described his career as involving two different wars in Iraq. Powell commanded the Gulf War in 1991 as chairman of the Joint Chiefs of Staff. He was able to achieve a perfect victory with minimal military power. However, the second war in Iraq in 2003 was the complete opposite. His restrained theory of military power was completely rejected by the neoconservatives, the civilian security experts who make political war decisions. Powell was unable to stop them from assuming control.

Powell served as the national security advisor during the administration of Ronald Reagan. Applying his experience in the Vietnam War, he proposed security guidelines, which became known as the Powell Doctrine, providing that in the event armed intervention is unavoidable, the nation must consent before it intervenes with military power. Despite Powell’s pledge in his 1995 memoir that he would not execute a war that the public did not approve of, he was responsible for the war in Iraq as secretary of state in 2003. Although he claimed to have felt helpless among the neoconservatives, Powell was criticized for not making an effort to support the opposition.

Powell’s name itself demonstrates the greatness of the United States. His dedicated his life to domestic issues such as immigration, race, poverty and public education. Despite being Black and the son of an immigrant, he received a public education in the South Bronx, graduated from the City College of New York, and eventually served as national security advisor, chairman of the Joint Chiefs of Staff and secretary of state. This is why Bush said, “Colin Powell is a great American story” upon his nomination as secretary of state. Although he was a Republican, he supported Barack Obama in 2008 and criticized Donald Trump in 2016. He even endorsed Joe Biden on YouTube during last year’s presidential election.

Powell made a great effort to ease tensions after Bush described North Korea as an axis of evil and when Secretary of Defense Donald Rumsfeld talked of preventive war and preemptive strikes. In order to prevent intervention by the neoconservatives’ central figures, including Paul Wolfowitz, Richard Perle and John Bolton, Powell cooperated with his Korean partner, Foreign Minister Yoon Young-kwan, to create a barrier to the six-party talks.

Unfortunately, Powell is no longer with us. May he rest in peace.