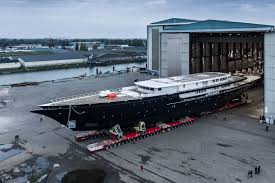 The way the world looks right now, it’s not great powers, governments, dictators or politicians that rule, nor bankers, speculators or stock market sharks. Rather, it is those overpowering individuals who lose touch with reality, drunk on the romance of being self-made. Psychopathic billionaires, or at least sociopaths, who started out in fabricated garages, now imagine themselves as the lords of the universe.

Joseph Stalin and Adolf Hitler would have no chance in this world — one would remain a thief and the other would have more time to paint.

What we are approaching resembles the realm of James Bond villains, only villains who are possessed of more advanced technical expertise, which, let’s be honest, is pretty scary. Currently, the triad of Mark Zuckerberg, Elon Musk and Jeff Bezos is are leading the way, but as the arena is very attractive, the field is clearly with players mercilessly in pursuit at any given moment. It’s just that kind of sport. It’s unforgiving. The players are convinced that they can do anything because they are entitled to, and that’s that.

Here now is Jeff Bezos (former bookseller, now astronaut and newspaper owner, and one of the outstanding guardians of our personal information), a happy owner of $175 billion, and a brand new yacht. The sea cruiser, 127 meters long (approximately 417 feet), roughly 40 meters tall (approximately 131 feet) is currently resting at a shipyard in Rotterdam, waiting to sail the high seas and provide a suitable environment for its exhausted owner. There is only one obstacle towering before the long-awaited event: a bridge. In this case, literally and symbolically. De Hef* is a monument to industry. It was built in the 19th century, blown up by the Germans in World War II, then rebuilt by the diligent Dutch. It was renovated in 2017 and city leadership took a sacred oath to never disturb the bridge again.

Rotterdam kept its promise right up until Bezos sailed in with his raft. It turns out that although the bridge can be raised in advance of any possibility, Bezos’ monstrosity does not fit under its closed upper part. I can even imagine the scene when they found out. indeed, they clearly knew it was going to happen. Ultimately this project is not an overpass on Marx Square,** but I can imagine one of the knuckleheads saying on the phone, “Jeff, we have a small problem. The little one doesn’t fit under their stupid bridge.”

Then Michael Corleone, I mean Bezos, says, “No problem, we’ll dismantle it.”

As in dismantle the bridge. What’s the harm? And so it happened, because the promises of Rotterdam officials don’t mean anything when there are enough zeros at the end of a check. Money talks, the dog barks, but the caravan moves on.*** And the ship sails on, although this is not what Fellini meant.**** Both the monster and its support yacht with the helipad — which should not be thought of a as a rowboat you paddle out in the marina with — sail on. Well, it’s obvious that this guy is out of his mind. The one question that is left is what the citizens of Rotterdam think about all this. If there is anything left of what we consider normal, groups of waving citizens will be waiting when the vessel glides on the water as planned on a beautiful and bright summer day. Not that it matters, but still.

According to The New York Times (to be clear, Bezos owns The Washington Post), one of the megalomaniac billionaire’s companies, e-commerce giant Amazon, sells an odorless, colorless, material that is deadly even if consumed in small amounts. It is sodium nitrite, with which several Americans have committed suicide.

From the newspaper, it seems as though Amazon crossed the line with U.S. lawmakers, who are now demanding an explanation from the company. Considerable interest has been sparked as to how our hero is going to survive this one, the way he has with regard to his other ventures. By the way, the Times’ reporters went after a website that deals with suicide, not with its prevention, but a site that instead proposes various ways to commit the act. The use of sodium nitrite is the most recommended. And you can gain quick access to the additive on Amazon. On top of that, according to the suicide group, the company removed their warnings about the drug from its description.

This is where we are currently. And the ship sails on.

*Translator’s note: De Hef, officially the Koningshaven Bridge, is a decommissioned vertical-lift bridge in the port of Rotterdam, Netherlands.

**Translator’s note: An overpass was built on the former Karl Marx Square in Budapest, Hungary, which restricted larger trucks from driving underneath.

***Translator’s note: This refers to a Hungarian proverb meaning history moves ahead, no matter the criticism.

****Translator’s note: The author is referencing the 1983 film, “The Ship Sails On” by Federico Fellini.