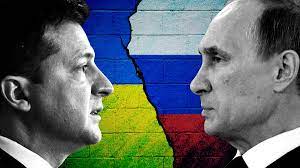 What if Vladimir Putin was somewhat right. This is the short refrain we hear in places since Russia invaded Ukraine. Threatened by NATO at his doorstep, Putin would be within his rights to act, and we don’t see why he would refrain from violating international law since so many others before him have done the same thing, like the Americans in Iraq or Kosovo.

With each conflict, it is always the same refrain: There must be legitimate reasons for waging war, so legitimate that those reasons supersede international law, which is poorly adapted to the demands of nations. Nicolas Sarkozy, on leaving the Élysée Palace, where he had just met with Emmanuel Macron, lamented that nothing works in international institutions, neither the United Nations nor NATO, nor the Group of Five, nor the Group of 20. Has international law since 1945 managed to become something other than a bunch of rules that everyone is constantly breaking? For example, a country’s ability to launch a military intervention requires a unanimous vote by the five permanent members of the United Nations Security Council (China, the United States, the United Kingdom, France and Russia). But what institution can function under such demanding rules? Not one. And we can wonder whether or not this was designed from the start to render the U.N. totally ineffective. It is understandable, then, that since the end of World War II, many countries have bypassed this absurd rule in order to engage in conflicts they consider to be legitimate. Under these conditions, why should Russia respect laws that many other countries have transgressed before?

The law is obviously not the most effective means of making sense of things. Countries can violate treaties, but not reality. Are the incidents that countries invoke to start war real or are they imaginary? Deciding whether the justification for war is real or imaginary is the only reasonably reliable way to judge the merits of a conflict. The United States attacked Iraq in 2003 under the pretext that Saddam Hussein had weapons of mass destruction. We now know that this was completely false and that Iraq did not possess such weapons. On the other hand, the facts can sometimes be very real. For example, in 1999, NATO bombed Serbia as its army entered Kosovo because it was feared that Serbia would commit further crimes against humanity. At the time, it was well known that between 1991 and 1995, Serbia had launched a policy of ethnic cleansing that wiped out tens of thousands of Croatian and Bosnian civilians. On the other hand, when Putin invaded Ukraine last week under the pretext that Ukraine was guilty of committing “genocide” against the Russian-speaking minorities of Donbass, we know that this was totally false.

Lying is a constitutive element of all dictatorships, whose aim is to push the population to adopt positions they would never have otherwise adopted themselves. This is not to be confused with cunning, such as when Charles de Gaulle famously said “I understand you,” which had more to do with craftiness than with lying. This practice, common in all regimes, including democratic regimes, has nothing to do with rewriting reality. The “alternative facts” invoked by Donald Trump are not far removed from the paranoid speeches that Putin is delivering. Fascists can only enter the scene after they deny a reality that disavows them. Trump, Putin or Eric Zemmour* have this in common: they need to rewrite history in order to insert themselves into it like squatters. But killing reality implies that we must also kill those who are part of it and whose mere existence is an affront to the delirious vision of despots. The world is no longer divided between East and West, but between denial and paranoia on the one hand and reason and dialogue on the other, all supposedly embodied in an international legal system that is often ill-conceived and obviously incapable of avoiding war.

*Editor’s Note: Eric Zemmour is a French far-right politician standing as a candidate in the 2022 French presidential election.