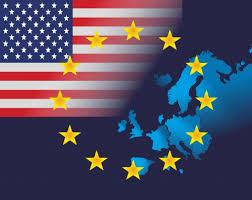 The Kremlin’s insanity demands the reinforcement of Atlanticism that many had given up for dead.

The return of the U.S. to the role it uniquely fills in the free world, after a cycle of isolationist self-absorption is good news. On Saturday, its president ended his visit to Europe with a stirring speech before a crowd in Warsaw, a speech a large part of the continent needed to hear to feel a sense of relief. Because although Vladimir Putin’s brutality continues to devastate Ukraine, the distance at which we find ourselves, for example in Spain, means it is sometimes difficult to comprehend the true fear in the air in EU, where memories of the Soviet Union are still fresh in countries suffering the current impact of bombs just a few miles from their borders. That is why, more than the negotiations in Brussels, the imposition of sanctions and messages in which the 27 EU member states take everyone’s security and territorial integrity for granted, many Europeans needed to hear Joe Biden say, “Don’t even think about moving on one single inch of NATO territory. We have a sacred obligation under Article 5.”

The U.S. president appealed to the collective defense provisions that obligate all NATO members to respond if one of them is attacked, and the president’s warning is one that Putin is well aware of. Biden’s firm position ensures that Europe has no doubt about the degree of Washington’s commitment to defense on the other side of the Atlantic. That is true because on the one hand, in recent years, especially since Donald Trump’s administration, there has been progressively more geopolitical distance between the EU and the U.S., which seemed to have put all its energy into the thriving Asia-Pacific — a clear antagonistic move with respect to China — and is now rediscovering that history is still being written on the Old Continent. On the other hand, the public is helplessly watching NATO’s frightened response to Putin in the wake of his attack on Ukraine, and from here, the fear only grows that an emboldened Putin will not stop with Ukraine. But although NATO is aware of the danger, they have remained firm in rejecting any offensive action that could lead to a third world war.

It seems crucial, therefore, that Biden’s speech, soothing as it was for Poles and so many others, included such an unequivocal warning. And in this context, the assertion that Putin “cannot remain in power” was also essential, although the ambiguity of the remark forced the Biden administration to clarify that the White House does not support a policy of regime change for Russia. The Kremlin’s insanity demands the reinforcement of Atlanticism, which many had given up for dead, and which certain left-leaning politics , such as the Podemos Party in Spain, continues to attack. Such Atlanticism remains vital for the security of EU citizens.