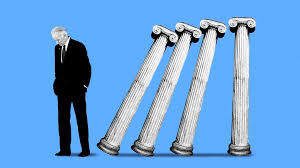 The American president may make it a priority to fight against autocracies, but realpolitik always catches up, especially as it did this week at the Summit of the Americas.

In his first speech before Congress 100 days after his inauguration, President Joe Biden drew a fundamental dividing line that would guide the approach of his new administration: a relentless struggle between democracy and autocracy.

“I predict to you your children or grandchildren are going to be doing their doctoral thesis on the issue of who succeeded, autocracy or democracy, because that is what is at stake. We’ve got to prove democracy works,” Biden said.

At the time, in April 2021, barely three months after the insurrection at the Capitol and the first attempted coup d’état orchestrated by an American president in U.S. history, Biden appeared to refer to domestic politics rather than international relations.

Yet, global developments have allowed the president to extend his thinking to foreign affairs. In the face of China’s growing power and its implicit threats to Taiwan and, of course, Russia’s invasion of Ukraine, the White House could play the defense of democracy card in confronting the spread of autocracies.

The Summit of the Americas, which opens this week in Los Angeles and is the first such summit on American soil since the Miami meeting in 1994, will test the Biden doctrine against the conundrum in Latin America.

The most important feature setting the summit apart is already clear before it gets underway: Mexico President Andrés Lopez Obrador’s decision to boycott the event. Lopez Obrador intended to register his dissatisfaction with Washington over its refusal to invite Nicaragua, Venezuela, and, of course, Cuba, a trio of countries snubbed for their human rights records.

The case of Cuba is particularly vexing for the White House. On the one hand, Biden served as vice president in an administration that was willing reopen (in part, at least) diplomatic and commercial ties with the island, which has been under a Communist dictatorship since the middle of the 20th century. The handshake between Raul Castro and Barack Obama at the 2015 Summit of the Americas made an impact.

At the same time, in spite of changes both real and promised in Cuba over many generations, you have to recognize the obvious: Cuba remains under the rule of a highly authoritarian regime.

It’s a similar story in Venezuela, where the “competitive authoritarianism” of Hugo Chavez has gradually given way to a regime similar in almost all respects to a dictatorship.

The American president, having professed unwavering opposition to autocracy, can hardly roll out the red carpet for such regimes.

Moreover, not only does the United States share a border with Mexico, it is also facing a range of challenges — beginning with the immigration crisis at that common border.

So, should Washington risk increased tensions in American-Mexican relations, or make concessions to certain dictatorships in the Americas?

The Response to the 1st Problem

Right now, the biggest headache for Biden’s White House is the question of energy.

The Democratic Party base is nearly unanimous on the importance of tackling climate change, and the party is making increasingly more room among its ranks for the environmental movement. It is no accident that one of the very first decisions Biden made after he took office was to cancel the Keystone XL oil pipeline, which promised to transport oil from the Canadian West to Texas.

The administration quickly added a commitment to sanction Vladimir Putin’s authoritarian Russia to these environmental priorities after its invasion of Ukraine. That led Washington and its European allies to impose full and partial embargoes on Russian natural gas and oil.

And yet, American voters have only one concern, and that is inflation, more particularly, inflation fueled by the Ukrainian conflict.

This concern manifests itself at the pump. In a recent private meeting at the White House, Biden’s chief of staff, Ron Klain, lamented the fact that gas is the only item that everyone knows the price of, given the omnipresence of service station signs. “Could they advertise anything else?” Klain raged.

The White House is seeking an immediate solution in the face of prices that continue to rise and break records. And given the fierce opposition that Biden would face from his own party if, from the outset, his administration supported increasing U.S. oil production, the president has decided to shift to the international sphere.

So, after having made a campaign promise to treat Saudi Arabia as a “pariah” state because of the treatment it metes out to its citizens — including the brutal murder of journalist Jamal Khashoggi in 2018 — Biden is dithering about how to approach the Saudi regime.*

On the one hand, Saudi Arabia is a dictatorial monarchy. On the other hand, it has also been an important traditional American ally in the Arab world since the 1940s, especially because it just happens to be the largest oil producer in the world after the United States.

As it prepares to visit the Saudi prince, the White House has at least sought to appease its democratic partners in Europe in the face of rising gasoline prices in their own countries.

Washington may be about to repeal certain sanctions in order to provide Europe with an easier flow of oil from … Venezuela.

*Editor’s note: The killing of Jamal Khashoggi has not been proven to be murder, a crime which requires adjudication in a court of law.