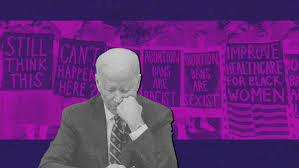 American civil society is organizing resistance in the wake of the Supreme Court’s decision to overturn Roe v. Wade a little more than two weeks ago. But organizers can’t do everything. One essential ingredient is missing: the unequivocal support of the Biden administration, which the left wing of the Democratic Party has harshly criticized for its sluggish defense of abortion rights.

As a result of the recent decision giving states the right to legislate access to abortion, the battlefront is inevitably shifting and fragmenting. Thus, women’s rights groups have expanded the number of court appeals in a good dozen states seeking temporary injunctions blocking the implementation of anti-abortion laws like those notably passed in Kentucky and Louisiana. But there is a broader fight that will involve demonstrating that certain state constitutions establish the right to abortion that the Supreme Court says does not exist in the Constitution of the United States.

It is an arduous and long-term fight during which, it goes without saying, the lives and the health of hundreds of thousands of women are in jeopardy. According to a recent study, removing the right to abortion care increases the odds that the mortality rate of pregnant women will increase overall by more than 20%, and more than 30% for Black women, as though the lives of many women were not difficult enough in this empire of inequality that is the United States.

It is an uncertain fight, as well, given the trending of governments and the courts to the right. The fact is, for 10 years, the Republican Party, with special interest groups like the Federalist Society and Judicial Crisis Network, has invested heavily in conservative and anti-abortion judges given that state Supreme Court justices are elected in no fewer than 38 states. The upcoming November midterm elections will reshuffle the deck in some of those states. But in which direction and by what percentage?

Democrats are certainly not innocent when it comes to the politization of the judiciary, but they are less financially invested and have not been at it as long as the Republicans. The fact remains that we are now taking measure of this moral and religious move to the right. Some 26 states have limited access to abortion — we know the numbers — threatening to impose restrictions on the process or make it outright illegal.

Epic court battles are emerging around the constitutionality of abortion in Kentucky, Michigan, Kansas, Montana and Florida, among other states. Florida will be a major testing ground as its constitution recognizes the right to privacy and, on this basis, its Supreme Court has already struck down laws restricting abortion access. But the Florida court has had a fully conservative bench since 2019, thanks to Ron DeSantis, a Republican governor with anti-abortion convictions and presidential aspirations. To what extent will the courts respect Florida’s constitution and precedent?

It is discouraging that, faced with a such a large-scale, reactionary assault on the right of women to live freely, President Joe Biden, who promised the United States a Rooseveltian second wind, is not championing the issue; that his government does not appear more proactive; that he is not sending Vice-President Kamala Harris into the fray. Incidentally, we wonder why she is so absent.

In 1973, as a newly elected first-time senator, Biden’s first reaction to Roe v. Wade was that the court had gone “too far.” His position has progressed with the political winds, but he has, in essence, remained ambivalent, mired in the soft center of the party.

However, Biden does have a concrete path to explore in guaranteeing abortion access beyond the limited executive order he signed on Friday. He could declare a public health emergency to ensure that women in states where abortion is illegal have the right to acquire abortion pills by mail, he could make use of Medicaid to finance interstate travel for an abortion; and he could make federal land available, as suggested by Sen. Elizabeth Warren, to set up clinics for abortion care and reproductive health counseling services. By not taking action, Biden’s indecisiveness is making the situation worse. He is calling on Democrats to mobilize in November to get themselves and the country out of this mess. Given how unpopular he is, that is woefully insufficient.