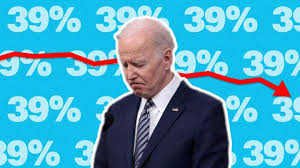 *Editor’s note: On March 4, Russia enacted a law that criminalizes public opposition to, or independent news reporting about, the war in Ukraine. The law makes it a crime to call the war a “war” rather than a “special military operation” on social media or in a news article or broadcast. The law is understood to penalize any language that “discredits” Russia’s use of its military in Ukraine, calls for sanctions or protests Russia’s invasion of Ukraine. It punishes anyone found to spread “false information about the invasion with up to 15 years in prison.

Joe Biden is on the right course to become the worst president in the history of the U.S. We can invent many ways to determine the winner of this nomination, but almost all of them point toward the current leader of the U.S. — he’s simply that bad. The only thing left for Biden to do is start a civil war. Americans think he could handle that.

Just 1 1/2 years ago, two-thirds of Americans and all of the major U.S. media outlets (except for Fox News) confidently branded Donald Trump the worst president in the history of the U.S., comparable perhaps only to James Buchanan.

Then, after the Capitol attack by the desperate (and, we emphasize, unarmed)** Trump supporters, few could imagine that an incredibly experienced politician and a diplomat such as Joe Biden would beat all the anti-popularity records of the eccentric billionaire and set some new ones.

We must understand that Trump, despite having millions of genuine and active supporters, always had pretty low approval ratings nationwide — somewhere between 44% and 48%. But Biden is a unique case. Having personal popularity, credibility and an unprecedented level of media support in the beginning of his presidential term, he literally performed a miracle the likes of King Midas, only in reverse: He turned all his “golden” ratings into trash.

According to the Morning Consult research (this company specializes in such research), the disapproval rating of the current president is at 57%, with 43% of the respondents expressing “strong disapproval.” Trump’s ratings at a similar point during his presidency (in 2018) were 4% better.

The most striking thing is that Biden’s ratings among Republicans are worse than that of Trump among Democrats.

It seems almost inconceivable if we remember the levels of hatred directed at Trump, the “insufferable fascist,” and the degree to which the party agreed on this matter.

But Biden knows how to surprise. For example, at the moment, his ratings among Hispanic Americans are lower than among white Americans. For a Democrat, that’s inconceivable as well.

Some of the other estimates show even more modest approval rates for the president — down to 35%. That’s a full-fledged anti-popularity record for the second year of his term.

Of course, George W. Bush, whose rating at the end of his second term dwindled to around 20%, is still the least popular president in the entire history of measuring these sociological responses. But, back then, his presidency was plagued by the Great Recession; on top of that, American society finally realized that the war in Iraq was a foolish idea, if not criminally so. Currently, the U.S. is not engaged in any large-scale wars, a new global crisis is for now only looming ahead, but the incumbent president is already a contender for the dubious title of “worst in history.”

If we narrow the statistics down to specific states, Biden right now could win in only six out of 50 states (and that would have been 10 just three months ago); the very liberal Delaware, the state he called home and represented in the Senate for almost 40 years, is not among them. His disapproval rating there outweighs his approval rating by seven percentage points.

California seems to be the best state for Biden, where his net approval rating rose nine percentage points. Right now, it’s the wealthiest and the most populous U.S. state, the capital of the movie and information technology industries, and a state that became a field for liberal experiments, and for a very long time, the Republicans had no chance of winning there.

Fun fact: California’s govenor is Gavin Newsom, who is considered one of Biden’s most likely successors. We can’t overlook the possibility that he’ll enter the presidential race even if Biden shocks everyone and seeks reelection. It is possible that Newsom will run for president just to prevent Trump from returning to the White House, since Biden can’t compete with Trump, as we’ve seen above.

But let’s turn back to Biden. If we assume that his current approval ratings match the response to his attempt at reelection, we could be talking about one of the most crushing defeats of a sitting president in the history of the U.S. But still, not the most crushing one.

Herbert Hoover suffered the most devastating defeat in 1932. The reasons were clear: His presidency saw the start of the Great Depression, an all-around economic and social catastrophe, and yet the president didn’t consider it necessary to intervene and deferred to the sacred principle of noninterference in the economy.

Hoover won in six states, as well but if the election took place today, Biden would beat with the number of voters given California’s large population.

One more interesting coincidence: Franklin Delano Roosevelt, Hoover’s opponent, who is usually considered one of the best leaders in American history, didn’t win his home state of New York, where he was also governor at the time. So Delaware’s “betrayal” is not that unique.

We could spend hours digging through the reasons for Biden’s unpopularity, but the significantly reduced list of “sore points” includes: the worst inflation in 40 years, an immigration crisis, a dramatic increase in gas prices, an increase in violent crime, unexpected deficits in items ranging from fertilizer to baby formulas, the aggravation of “culture wars,” the Afghanistan embarrassment, the complete lack of success in foreign policy, the president’s old age, which is showing up in “Bidenisms,” among other things, and the global conflict with Russia, combined with the proxy war in Ukraine, which further exacerbated some of these problems. The 79-year-old veteran of diplomacy drove the country to such lows that even Elon Musk is now a conservative. The people’s trust in government has fallen to a record low point.

Judging by the reaction in the blogosphere, many have liked this line. Biden is really viewed as a disease that has struck the entire country. Even those who considered Trump and his presidency an infliction as well, agree.A Russian proverb that says “you can’t treat the plague with cholera” is quite fitting here, something many Americans have realized.

Unless something extraordinary and unpredictable happens, this fall the Democratic Party will lose control of Congress this fall and the White House as well in two years. By then, Biden could be quite capable of beating Bush’s record of being the most unpopular president in history, and if he really follows up on his promise to run for reelection, Biden could beat Hoover’s record as well (this, however, depends heavily on who runs against Biden, and Trump, a likely contender, is an objectively bad option).

There’s also another factor that contributes to being the worst president. It’s the consensus of contemporary historians, according to whom the worst of the worst is still Buchanan, whose indecisiveness and powerlessness led the country into collapse and civil war.

At the same time, University of California research shows that more than 50% of Americans are already sure there will be a new civil war in the next few years.

In conclusion, everything else will follow as a consequence — a new Great Depression, a new global financial crisis, or even the country’s collapse. Then Biden will truly have no equal in American history.

**Editor’s Note: Charges by the U.S. government against the alleged rioters are supported by evidence that they were armed with a variety of weapons: stun guns, pepper spray, baseball bats and flagpoles wielded as clubs.

About Artem Belov 36 Articles
Artem Belov is a TESOL-certified English teacher and a freelance translator (Russian>English and English>Russian), currently residing in Russia. He is working on a number of projects, including game localization. You can reach him at belov.g.artem@gmail.com