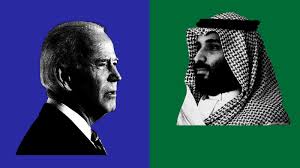 Washington doesn’t want to see the Iranian regime’s true colors. None of President Joe Biden’s statements issued so far by the administration has matched the gravity of the massive uprising that broke out in Iran after Mahsa Amini died at the hands of the morality police, who detained the young Iranian woman because her headscarf revealed more hair than the nerves of the Islamist jurist regime’s guardians could bear.

In 2009, former President Barack Obama turned a blind eye to the Green Movement protests that erupted in the Iranian capital, mainly in northern Tehran where the educated and Western-oriented middle class lives, to contest what people saw as fraudulent presidential election results and the election of Mahmoud Ahmadinejad over Mir-Hossein Mousavi, who remains under house arrest today.

Obama based his approach on giving priority to a nuclear deal with Iran and ensuring that nothing undermined the open backdoor channel between Washington and Tehran via Oman. Obama argued that if America sided with the Iranians, it would make it easier for the regime to deem the protesters traitors and attribute the uprising to foreign powers. Conversely, those same considerations were not on Obama’s mind when he decided early on to side with the Egyptian uprising against the regime of the late President Hosni Mubarak and urged Mubarak to step down “now!”

Today, the Biden administration is also prioritizing the revival of the nuclear deal despite all signs that Iran is not interested in the deal as much as it is interested in prolonging negotiations to serve two goals: Buy more time to develop its nuclear program, particularly at the military level, and use its intransigence in the talks to boost the regime’s popularity and revolutionary reputation at home.

When Washington’s attitude on Iran is compared with its attitude on Egypt and the Arab Gulf countries, especially Saudi Arabia, it becomes very difficult to look past American hypocrisy.

In the context of America’s clash with Saudi Arabia and Saudi Crown Prince Mohammed bin Salman, several members of Congress nominated Saudi female activist Loujain al-Hathloul for the Nobel Peace Prize. The irony is that al-Hathloul’s conflict with Saudi authorities was not over women’s right to drive, which the crown prince has already pledged to allow. It was because she wanted to exert that right before the decree took effect in an act of defiance for defiance’s sake.

Al-Hathloul’s imprisonment and subsequent release cannot be likened to what happened with Mahsa Amini, who suffered a fatal blow to the head simply because she didn’t wear her head scarf according to the rules that Ali Khamenei’s misogynist guardianship imposes on women. Nevertheless, the contrast between the U.S. position on Amini’s case and the scale of American media coverage, statements, and reports about al-Hathloul’s case is a stark example of American hypocrisy.

In New York, for example, Iranian President Ebrahim Raisi was received under the protection of American security. At a time when Raisi’s security services were waging a bloodbath against the Iranian people, Raisi was able to hold all sorts of meetings with the American elite, and the media outlets were busy posting pictures of the Iranian president shaking the hands of several world leaders, most notably French President Emmanuel Macron. Now, compare the coverage of Raisi with how major American newspapers covered the “dramatic” handshake between Biden and the crown prince during Biden’s visit to Saudi Arabia and how the media interpreted that televised moment.

Furthermore, Raisi’s arrival in New York came weeks after a young man made a scandalous attempt on the life of novelist Salman Rushdie. All circumstantial evidence indicates that the Iranian Revolutionary Guard Corps recruited the perpetrator through Hezbollah in Lebanon. Iran denied responsibility for the attack, but it celebrated it in every possible way, raising the assailant to the ranks of the great fighters of American arrogance, and champions of the dignity of Islam and Ruhollah Khomeini’s fatwa against Rushdie.

The Rushdie case was allowed to die down, and American intelligence did not bother investigating how that criminal attack and its perpetrator fit into the Iranian regime’s decision-making process and hierarchy. On the other hand, the murder of Saudi journalist Jamal Khashoggi is still up for discussion, as if it encapsulates all of Saudi Arabia’s past, present and future, and as if it is the only event that can be used to evaluate relations with Saudi Arabia.

One crime does not justify another, but you cannot overlook the palpable difference between the Saudi and Iranian response to the two crimes and the contrasting ways in which America reacted to them. There is a big difference between a government that criminalizes Khashoggi’s murder and prosecutes the perpetrators, regardless of how some people perceive such a trial, and a government that insists on the legitimacy of killing Rushdie and even considers the murder attempt a model for future attacks. A culture that criminalizes such an attack is nothing like a culture that celebrates and encourages it, but this is something that suspiciously and nauseatingly does not enter into Washington’s calculations.

Another paradox is that Saudi Arabia and the crown prince personally played a key role in brokering the release of American prisoners captured by Russia for fighting on behalf of Ukraine, whereas Iran is still holding American hostages and using them as human shields to leverage ransom from Washington. The hostage-liberator and the hostage-taker are not the same, and they are certainly not treated equally by Washington, which seems more tolerant of the hostage-taker and more uncompromising with respect to its historical Saudi ally.

One can cite a hundred more examples of fierce American resistance to seeing the Iranian regime for its true colors, yet paints a false picture of Saudi Arabia and its allies and insists that what it wants to see is what is actually there.

After 9/11, Americans began asking a simple and dangerous question: Why do they hate us? Today, it is our turn to ask the Americans, why do you hate us?