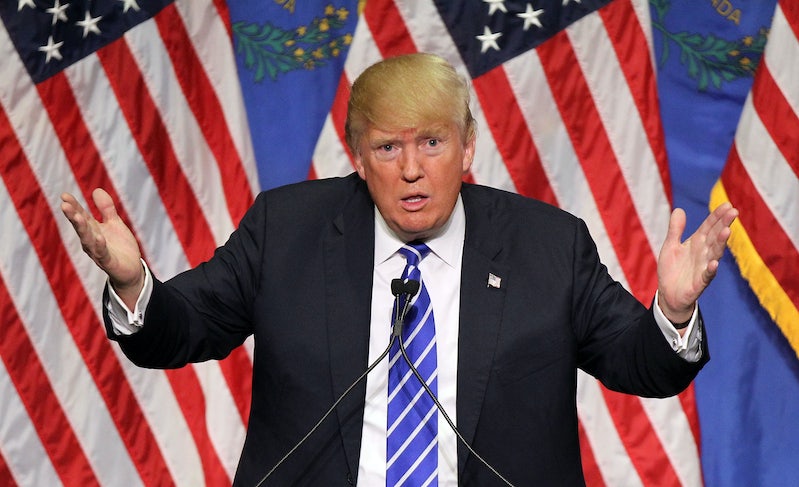 The U.S. president produces one scandal after another and makes the U.S. look like a laughingstock. Can he be stopped?

Four words are sufficient to describe the first four months of Donald Trump’s presidency: He can’t cut it. In light of the speed at which the aging braggart with the disposition of a spoiled school child has plunged the White House into chaos, one can only rub one’s eyes in astonishment. However, no one can be surprised at these facts alone. It almost had to come to this inevitably, because nearly two years ago, indications already were that the real estate mogul from New York would, at best, be a bad presidential impersonator, but never a good president. Now, many Americans want to refuse to believe this until the bitter end. Now he is president, and because of his office, he is no longer only making himself a laughingstock but is likewise making his whole country a laughingstock.

The U.S. bureaucracy, like all well-developed bureaucracies in this world, runs nearly flawlessly, but in some spots, there are huge loopholes. So, for example, someone in the U.S. Army that is assigned guard duty over the nuclear arsenal must pass a test to see if he is psychologically up to this task. There is, however, no test provided for the president, who, after all, holds in his hands the launch codes for nuclear missiles. That could turn out to be a serious mistake. Trump is unpredictable, he doesn’t have any self-control, he is resistant to advice and he is impulsive. He could readily be that way as a businessman and star of his own show. As president of the United States superpower, he must not be that way. So much for theory.

Now let’s talk about practical. Trump hasn’t even been in office for four months, and chaos has become a permanent condition of the U.S. government. Whatever the president touches becomes a scandal. There he is, blurting out classified information in front of the Russian foreign minister, of all people. There he is firing of the FBI director who is investigating Trump’s team for possibly illegal contacts with Russian officials.

Trump treats his office and his country like his property, and his supporters apparently still feel comfortable in their assigned role as meaningless serfs. The cocky Trump has not fulfilled even one of his countless campaign promises to supporters, but they still cheer him on. That is how it is when one succeeds in declaring that facts are unimportant and replaces them with opinion. Basically, it is like mathematics. Two plus two is four. That only remains a fact until Trump comes and says: Two plus two is five. This is where the debate ends.

Perhaps, Trump has now gone too far. In February, he is purported to have asked the now fired FBI director to discontinue the investigation into his short-term national security advisor, Michael Flynn, who had contact with Russian officials that he did not want to admit. The former FBI director, shocked by the president’s audacity, wrote about Trump’s request in a memo. There are no serious indications that the matter might not be true because the former FBI director is considered to be a straight-laced law enforcement officer.

If the allegation that Trump asked the FBI director to discontinue the investigation is true, then the sitting president of the United States may possibly be guilty of violating the law. The matter has not yet been definitively settled; it will be difficult to convict the president. However, it is already striking that the first members of Congress are now speaking about the concept of impeachment.

What Trump’s opposition has been convinced of since his he won the election November is now beginning to dawn on more and more Republicans: The president can’t cut it; he is unprofessional—a windbag who only thinks about himself and his family, a man with the disposition of a child who has at his disposal a fullness of power that he cannot handle.

Impeachment proceedings would indeed be an elegant means to get rid of the president. Still, in all probability, it will not come to that. The House of Representatives would have to resolve to remove the president from the White House with a simple majority; the Senate, after that, with a two-thirds majority.

In both chambers, the Republicans have the majority, and it is largely doubtful whether enough congresspeople can be found who want to get rid of Trump. There is no question: Trump should be chased out of office as quickly as possible. Then, however, the Republicans would have to accept that they have succumbed to a charlatan. But, they do not possess this greatness in them.