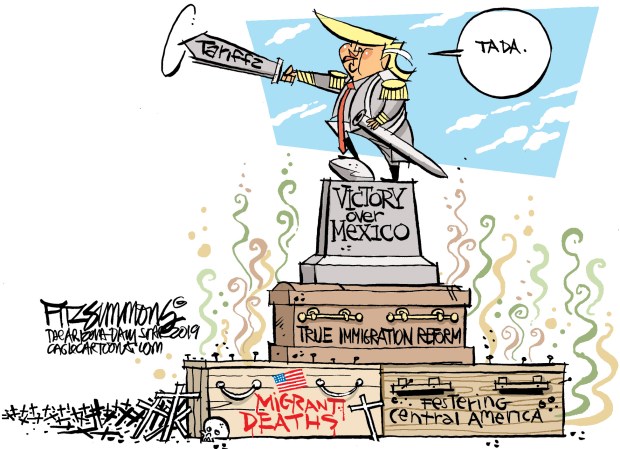 Mexico yields to Donald Trump – and he refrains from imposing punitive tariffs. The compromise doesn’t help the migrants from Central America; it only helps the electioneering Trump. Nonetheless, Mexico was able to push one thing through.

Now it is here: the “agreement” between Mexico and the U.S. in the tariff war. That’s how it was announced by the governments of both countries late Friday evening after days of negotiations. Yet the word “agreement” is misleading. It suggests a reciprocal accord between two equal partners, a success of prudent individuals, diplomacy.

However, this was in no way the case in the tariff war between Washington and Mexico City. President Donald Trump forced the Mexicans to the negotiating table with a chokehold; he threatened to impose tariffs of up to 25% on imports from the southern neighbor. The already stagnating Mexican economy would not have been able to withstand that. The end of the tariff war is no agreement but instead the result of extortion.

The Mexican government has obligated itself to undertake measures that it would not have taken alone and that essentially make no sense – apart from supporting the upcoming election campaign of the U.S. president. They are sending 6,000 National Guard troops, members of a newly formed unit of military and police personnel, to the border with Guatemala. They are not supposed to let any more Central American migrants through.

One Point in the Paper Gives Reason To Hope

That is senseless because the Hondurans, Salvadorans and Guatemalans will only be deterred in the short term at most, but not in the long run. These people are fleeing because they have no other choice. At home they are threatened by poverty in the best of cases but also frequently by torture, death and persecution from marauding gangs. The Mexican-Guatemalan border is just 900 kilometers (560 miles) long, but even seen from a purely practical standpoint, it cannot be secured by a few thousand soldiers and policemen.

Even if it were possible, it would not be a solution to the problem but would merely mean locking it out.

Just as questionable is the once again expanded concession by Mexico to take back Central American migrants immediately after they apply for asylum in the U.S. Mexico is supposed to provide for them until a decision is made on their applications – although the people don’t even want to go to Mexico. But that doesn’t interest the U.S. president. He forces his southern neighbor to play the part of a border policeman who keeps everything unpleasant outside – a pattern of thinking that is familiar from the European refugee debate.

The only positive thing about the Mexican American agreement is that the U.S. has finally brought itself to state that it “welcomes” the development plan for Central America. Mexico and other countries have fleshed it out: Multibillion-dollar investments in the economy and education are meant to combat poverty and violence – the true reasons Hondurans, Salvadorans and Guatemalans make their way north. In recent months, Trump has hardly shown any interest in this. The greatest of all optimists might hope that this will now change.