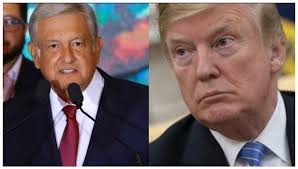 Fifteen days ahead of time, the Mexican Senate and the Foreign Ministry have responded in the negative to Donald Trump’s request.

Without much fuss, the Ministry of Foreign Affairs and the Mexican Senate reached an important agreement Aug. 22: they said no to the possibility of Mexico becoming a “safe third country.”

They did this 15 days before the date the Trump administration set for resuming talks and reviewing the outcome of our country’s immigration policy, established some months ago to tackle the crisis resulting from the caravans of people from Central America.

Until last night, there was no information as to whether there would be a response from Washington, but on this side of the border, authorities believe that the Trump administration will not be at all pleased that the Foreign Ministry and the legislature are closing ranks.

The Trump administration was not pleased with this because the Mexican government has, in effect, ruled out the possibility that Mexico can become a permanent refuge for undocumented persons from any country in the world, and especially from Central America.

That is a foregone conclusion. And if the U.S. does not like it, we will consider how that affects us, a high-ranking Mexican government official told me.

This past Monday, Mexican President Andrés Manuel López Obrador also said there will be a meeting between U.S. and Mexican authorities to discuss the immigration issue on Sept. 10. And he emphasized that his government is complying with its commitment to regulate immigration in our country as agreed and on time.

President Lopez Obrador’s statement and the agreement between the Senate and the Ministry of Foreign Affairs, advances the regulation of immigration as we get closer to Sept. 5, Trump’s deadline for Mexico to regulate the flow of immigrants in exchange for not imposing tariffs on all Mexican exports to the U.S.

Not only that, but looking ahead to the Initial Government Report this coming Sept. 1, the 4T will promote all this as a great achievement.*

And that is no surprise, because the way things have turned out, foreign policy is one of the few fields in which López Obrador’s government has halfway held its own.

In fits and starts, the exodus of immigrants to the U.S. has slowed. In May, for example, officials recorded the passage of 144,000 people into the United States without documentation, a shocking historic high.

In August, it fell to 70,000, a little less than half. This means they have been getting something right.

That, along with agreements achieved with other countries and the containment of the crisis in the domestic diplomatic corps, leaves Mexican Secretary of Foreign Affairs Marcelo Ebrard looking good. What we haven’t seen yet is how the U.S. will respond to Mexico saying no to becoming a safe third country.

*Translator’s note: “The 4T” refers to the assertion by current Mexican President López Obrador, that his six-year term as president will constitute a “fourth transformation” in Mexican history, on a par with the three accepted turning points in Mexican history: independence, reform and revolution.