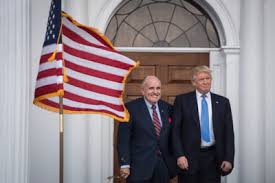 There has been a dramatic turn of events. The president of the United States postponed a $391 billion assistance package for Ukrainian military support before asking Ukraine’s head of state for a favor during a phone call on July 25. What favor was it? Donald Trump asked for Volodymyr Zelenskiy's help in investigating former Vice President Joe Biden, who is favored to win the Democratic presidential nomination. The U.S. president even suggested that Zelenskiy directly contact his personal lawyer, Rudolph Giuliani, who is conducting a smear campaign against Biden with Trump’s approval.

As if that were not enough, a whistleblower from the intelligence community disclosed that National Security Council lawyers attempted to cover up the details of this phone call, advising that the record of the call be stored in a system for classified information.

American foreign policy is officially shifting, and Trump, assisted by his loyal right-hand man Rudy Giuliani, might be trying to take advantage of his position to serve his own political interests. Is that a surprise? Not really. There were very good reasons to sound the alarm way before the details of the Ukrainian matter were exposed. White House foreign policy management has been compromised for quite a while. And the consequences of this drift could be disastrous for the future of this presidency and for the U.S.

’I Make All the Decisions’

As soon as he took office in spring 2018, former National Security Advisor John Bolton undid the formal process and structure of Trump’s government policies one by one. The number of meetings of the main national security advisers committee melted away overnight, and the extensive assessment of options carefully formulated by national security departments and agencies was dropped, replaced by a culture that did not trust experts.

Did Trump challenge the changes? No, he was actually glad he did not have to endure long informational sessions and debate that H. R. McMaster, Bolton's predecessor, made him sit through. Given unwavering confidence in his own judgement, Trump doesn’t think he needs the informed advice of the national security system, as demonstrated by his remarks just before he announced Bolton's successor. "It's great because it's a lot of fun to work with Donald Trump, and it's very easy, actually, to work with me. You know why it's easy? Because I make all the decisions. They don't have to work," Trump said.

What happens when formal processes and structures are replaced with improvisation? The president makes reckless decisions, sometimes they are borderline illegal, and official or unofficial advisers can unilaterally take over certain foreign policy matters and divert them for fraudulent purposes.

An example that illustrates the consequences of such an unlawful appropriation of foreign policy by unscrupulous bureaucrats is the Iran-Contra case which occurred during Ronald Reagan's second term. But what happens when the president partly outsources the management of foreign policies to an individual who has no official government position? We are now finding out with the Trump-Giuliani duo.

Giuliani managed to gain the trust of his boss by completing a number of thankless tasks. Remember that If you remember, he was the only Trump adviser who continued to defend Trump publicly after the broadcast of his misogynistic and vulgar comments recorded by the show “Access Hollywood” in October 2016. Between 2017 and 2019, Giuliani repeated the mantra "witch hunt" on every media outlet to discredit the investigation by Special Counsel Robert Mueller and to protect his client.

However, since the beginning of 2019, his role has not been limited to that of henchman on the news channels anymore. Giuliani has launched a huge political and diplomatic operation outside the State Department to gather information on alleged corruption, still baseless to this day, involving Joe Biden. Thanks to certain diplomatic personnel, including the special representative for Ukraine, Kurt Volker (who resigned in the wake of the present crisis), Giuliani was able to contact advisers to President Zelenskiy and Ukraine’s former attorney general. Last May, Giuliani even tried to go to Kiev in order to compel Ukraine to open an investigation into Joe Biden and his son, Hunter. Giuliani also contributed to a smear campaign against the American ambassador in Kiev, Marie Yovanovitch, a respected diplomat. Following repeated attacks from the president's followers, Yovanovitch was mysteriously sent back to Washington. Trump might have slightly tempered Giuliani's enthusiasm by forcing him to cancel his controversial trip to Ukraine, but Trump did not try to stop the secret campaign against Biden. On the contrary, Trump suggested that Zelenskiy contact Giuliani and Attorney General William Barr instead of working with his secretary of state, Mike Pompeo, the person in charge of American diplomatic relations.

The revelations concerning the Ukrainian story and Giuliani's conduct reveal the extent to which foreign policy has drifted, something which could have serious consequences for Trump. Entrusting Giuliani with these responsibilities is a good way for the president to self-impeach, Tom Bossert told ABC News on Sunday. Whether the Trump-Giuliani duo will suffer the same fate as Richard Nixon and his right-hand man, H. R. Haldeman, during the Watergate episode remains to be seen.