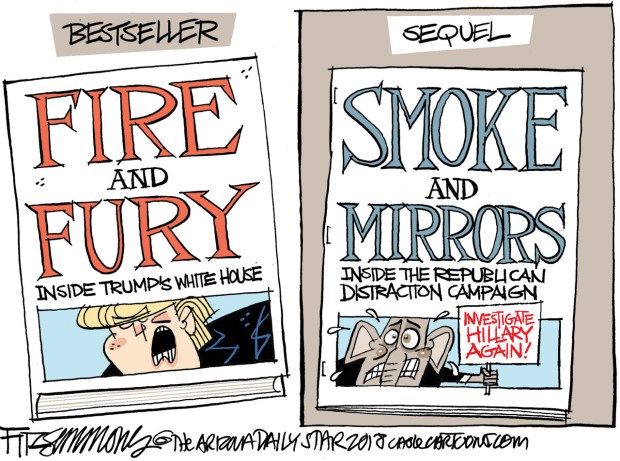 It is disgraceful that President Donald Trump cannot defend himself in the impeachment inquiry, the Republicans exclaim. They are now using a tried and tested strategy: sowing doubt about “the process.”

Now that the facts are becoming more and more well defined, Donald Trump and his supporters are resorting to a different way of challenging the impeachment findings: complaining about the process.

This week, William Taylor, the replacement American ambassador to Ukraine since May, recounted in great detail how Trump definitely and suddenly demanded personal political compensation from President Volodymyr Zelenskiy in exchange for $390 million in military aid. Taylor talked about an “irregular, informal channel of U.S. policy-making” alongside the usual diplomatic channel, through which Trump’s vassals increased pressure. Ultimately, Taylor stated, Trump wanted Zelenskiy to announce on CNN an investigation into his political opponent Joe Biden and the Democrats.

Or, as Sen. Lindsey Graham put it on Thursday, “I don’t want to comment on substance. I’m not here to tell you that Donald Trump has done nothing wrong. The process in the House today, I think, is a danger to the future of the presidency.”

The process is the culprit.

On Wednesday, events culminated in more than 20 Republican representatives raiding the secure room where a House Intelligence Committee hearing was scheduled. In front of TV cameras, the Republicans demanded that they, too, should be allowed to sit in on the “secret interviews” in the “basement of the Capitol,” in the words of Republican rebel leader Matt Gaetz.

Behind those closed doors, his colleague, Steve Scalise from Louisiana, said in a press conference preceding the raid, Democratic House Intelligence Committee Chairman Adam Schiff is trying to impeach the president.

It is customary to undermine damaging findings that are made as a result of unfair procedures. Equally, Trump and the Republicans dismissed the FBI and Robert Mueller’s investigation into Russian involvement in the 2016 elections as a political smear campaign, something which has not stopped since the Mueller report was released.

On the contrary. On Thursday, The New York Times reported that Attorney General William Barr has opened a criminal investigation into the origin of the Russia inquiry, and thus, into his own Justice Department. It upgrades an internal investigation opened in May (also by Barr) into the state of affairs and preliminary formation of a theory that views the entire Russian interference as a so-called red flag operation: it was not the Russians, but the FBI and the CIA which entrapped Trump adviser George Papadopoulos when a Maltese professor approached him and offered him dirt on Hillary Clinton.

The ramping up of this investigation has been going on for a while. Barr even traveled to Rome as part of the effort, but the timing of the news about Barr that was leaked to The New York Times is remarkable, made right during the week of incriminating hearings. Barr’s investigation creates a parallel storyline, with Trump not as the perpetrator, but rather playing his beloved role as a victim of the machinations by the so-called Deep State, however far-fetched.

And storylines are what Trump is after, as Taylor’s testimony on Tuesday made apparent. Whether the investigations that Trump wished for into Joe Biden and the Democrats will yield something, in the end, is not relevant. (According to right-wing conspiracy theories, Ukraine played a role in the interference into the 2016 elections, but did so on behalf of the Democrats.)

Trump was interested in having Zelenskiy introduce this storyline publicly, namely during an interview on CNN. Gordon Sondland, Trump’s most important errand boy on this project, even wanted to see the draft statement that Zelenskiy was supposed to read. That was the “deliverable” Trump expected of Zelenskiy, Sondland wrote in a text message to Taylor.

In the hearing on Tuesday, Taylor confirmed in more detail and color that which has become generally known since the White House released a report last month of a July 25 phone call between Trump and Zelenskiy. That phone call, revealed thanks to a whistleblower’s complaint, now forms the basis of the impeachment inquiry.

For example, when Taylor found out that Trump was seeking a quid pro quo for U.S. military aid to Ukraine (a quid pro quo that was personal because it was related to Trump’s reelection), Taylor contacted Sondland. Sondland said the request was normal, noting that Trump was a businessman. “When a businessman is about to sign a check to someone who owes him something, the businessman asks that person to pay up before signing the check,” Sondland allegedly told Taylor. Taylor responded that Ukraine did not owe Trump anything and that this behavior was “crazy.”

Sondland said that the deal was not a “quid pro quo,” and not a trade-off, but noted that a “stalemate” would arise if Zelenskiy did not “clear things up” in public.

But the Republicans, who stormed the next scheduled hearing a day later, did not talk about that. They questioned everything, except their president. Among their complaints and allegations, they charged that:

• Taylor was allegedly “a radical unelected bureaucrat.” (He is a Vietnam veteran who also served under President George W. Bush.);

• The leaks from the hearings would be “selective.” (The information that mostly emerges from the statements the witnesses themselves have read);

• These are “secondhand or thirdhand” accounts. (That is correct, much of what Taylor testified to is information he heard from others.); and

• Regarding the overall complaint, there was a question as to the kind of process it was, which had not even been voted on and in which the accused (Trump) was not even being allowed to defend himself.

That last part is partly relevant, and partly completely irrelevant. It is true that Democratic House Speaker Nancy Pelosi, started the impeachment inquiry without voting on it. That is not required, but did take place during previous presidential impeachments. Acting the way they did, the Democrats prevented the Republicans from calling their own witnesses (possibly Joe and Hunter Biden). The Democrats thus stayed in control, but that does not strengthen their case, and it gives Trump and other persons involved an excuse to refuse subpoenas to testify.

The fact that Trump is not allowed to defend himself, as Lindsey Graham and Mitch McConnell said on Thursday, is irrelevant. The hearings are the first phase in the impeachment process and could lead to articles of impeachment or charges. Only then will a trial take place, where the president would be allowed to defend himself, and which will be held in the Senate. Sens. Graham and McConnell know this, of course. But when the time comes, they would rather pass judgment on a victim than judge a perpetrator.