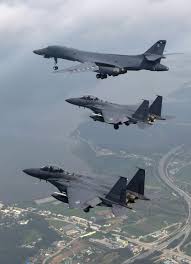 The U.S. is strengthening its air and naval presence in the Pacific Ocean to push back against the expansion of Chinese military force and to challenge China on the nine-dash line.* Although China has not yielded, the U.S. has the advantage.

According to media reports, the U.S. Air Force sent supersonic bombers toward both the East China Sea and the South China Sea a few days ago, and yesterday, two of the same type of bombers were dispatched from the Bashi Channel and the Philippine Sea. This pincer movement, a military maneuver used to envelope an enemy from both sides, was meant to display the ability to rapidly and strategically deploy bombs. Including yesterday’s move, the U.S. military has deployed supersonic strategic bombers to the areas around Taiwan and the South China Sea for the fifth time in one week. This proves that the U.S. has not relaxed the military precautions it has taken in the Western Pacific during the pandemic; rather, it is strongly expressing a determination to safeguard the freedom of maritime navigation and making clear the intention to fight.

For the past several years, China has often dispatched bombers, fighter jets and reconnaissance aircraft in mixed formations to the Western Pacific. These long-distance flights have not only allowed pilots to become familiar with the routes and how to respond to possible conflict, but have been a chance for China to use photographs taken by official media that force the perspective to make it appear that Chinese fighter aircraft are passing by Taiwan. China then uses media distribution of these photos to strengthen deterrence and increase nationalist sentiment for a forceful reunification with Taiwan. Regarding its military intent, China has repeatedly sent bombers to circle Taiwan, primarily on drills to practice attacking important Taiwanese facilities and intervention of U.S. ships with long-range land attack cruise missiles or anti-ship missiles. A Xian H-6 bomber once approached the American strategic base on Guam, demonstrating the ability to attack it by air.

In recent years, the U.S. has deployed the majority of its naval fleet to the Pacific Ocean to counter China’s modernization of its navy and increasingly frequent long-range naval exercises. It has moved its newest aircraft carriers and fighter aircraft to military headquarters in the region and bolstered the presence, training and exercises of the Navy and Air Force. In addition, the U.S. has strengthened cooperation and conducted joint exercises with allies and navies in the Indo-Pacific region. In the future, the U.S. will increase the Navy’s scope, using new military technology to enhance the use of warships, aircraft and unmanned platforms. It will also be integrating new operational concepts to counter the expansion of China’s military power. Nevertheless, in the face of increasing military threat by the U.S. in the South China Sea and Taiwan Strait, China has not yielded. Due to a disparity in navy and air force military capabilities, however, China has chosen to keep a close eye on U.S. deterrence activities, causing the situation in the region to continue to escalate.

Over the past few years, since China enlarged the islands in the South China Sea, the U.S. has refused to acknowledge China’s claim to the artificial islands. Instead, it continues to challenge China on its nine-dash line, occasionally sending warships to the South China Sea to sail within 12 nautical miles of the islands, thereby underscoring the freedom of maritime navigation. Recently, the U.S. sent warships and destroyers, including the USS Theodore Roosevelt and USS America, through China’s artificial islands in the Paracel and Spratly Islands and the Zhongsha Islets. Sending strategic bombers through the South China Sea and the East China Sea is another example of the challenge. Since the beginning of this year, the U.S. has practiced counter exercises for scenarios in which China attacks Taiwan from the Taiwan Strait or blockades the South China Sea. The goal of these exercises is to prepare for possible and anticipated military conflict that might explode in the region and to maintain unimpeded international routes through the Taiwan Strait. In other words, the U.S. is carrying out preventive military operations. For example, a carrier battle group is being sent in advance to strengthen forward deployment. In addition, strategic bombers and nuclear submarines sent near the Western Pacific demonstrate the ability to deploy strategic nuclear strikes.

In an armed forces training mobilization order given at the beginning of this year, Xi Jinping called for military training for real situations and combat conditions. The recent strengthening of China’s military exercises around Taiwan reflect that call. In other words, China is using training to test combat plans on potential battlefields in order to respond effectively to conflict that may erupt. Even though the pandemic has restricted the training operations and military strength of the U.S. and China, the displays of battle strength by both countries highlight the objective disparity between the military might of each. Although nationalistic Chinese young people on the internet are clamoring about how now is the best time to forcefully reunify with Taiwan, objective strategists and policymakers are evaluating the situation and will not want to provoke conflict.

As a Chinese strategist recently wrote in the online article, “The Issue of Taiwan Concerns the Fate of the Nation and Cannot Be Approached Recklessly,” the predicament facing China in resolving the issue of Taiwan is that the U.S. military has the power to intervene. America’s military power, including carrier battle groups, strategic bombers, nuclear submarines and tactical cruise missiles for various launch platforms, is far superior to China’s. Although China could take advantage of the pandemic situation in the U.S., American armed forces have not fallen apart. Regardless, whether or not using force will get China out of this predicament, the real problems for China are international sanctions, Taiwan governance and an economic blockade by the U.S.

*Editor’s note: The “nine-dash line” refers to the undefined, vaguely located, & internationally-invalidated demarcation line used by the Republic of China and the People's Republic of China, for their claims to the major part of the South China Sea.