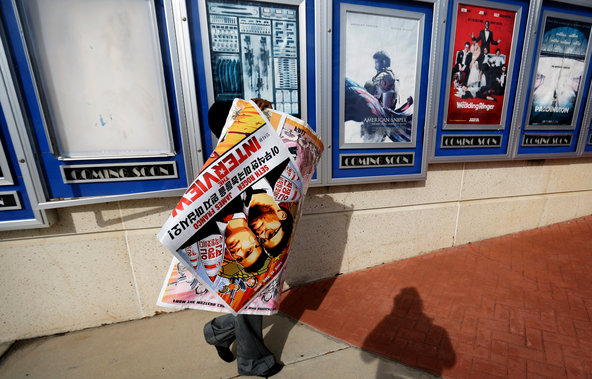 It’s not often one has occasion to envy North Korea. It’s the most persecuted country in the world; it’s brought into comparison when one wants to insult and humiliate. The most severe sanctions, the grimmest image. Yet Russians could envy the [North Korean] DPRK (Democratic People’s Republic of Korea) this week: The country managed to find a screw with a really devious thread for Hollywood’s devious nut.

Hollywood isn’t just Leonardo DiCaprio and Angelina Jolie. It’s a powerful weapon of the United States, on par with ballistic missiles, the dollar and Madame Nuland’s cookies. Hollywood determines for many years whom to love and whom to hate. Before a war begins, Hollywood must carry out an artistic preliminary bombardment, so you know with whom to sympathize. George Bush wouldn’t have been able to attack Iraq if American propaganda hadn’t explained to the American people beforehand that Arabs are terrorists.

Now, Hollywood has cooked up the movie “The Interview,” whose main characters — ordinary American TV journalists — are given instructions by the CIA to snuff out the Korean leader. And he is — you can imagine — a savage beast. A regular Gadhafi or Putin. And they kill him, much to everyone’s delight. The film was made, and preparations were underway for the premiere. The Koreans were outraged. “So you admit that you kill unruly leaders? That’s terrorism!” The Americans just chuckled in response, “Ignorance! You don’t understand art or appreciate humor!”

But then — oops! Unidentified hackers broke into the [employee] emails of the movie company Sony and posted them on the Internet. It turned out the movie wasn’t made for the jokes or in the name of art. The filmmakers hoped it would serve as an example for real terrorists/conspirators in Korea. And they were not alone: The State Department gave them its blessing, and the Rand Corporation, a center for strategic planning, wrote to Sony CEO Michael Lynton, “Your film will help Koreans with practical advice … We need regime change in North Korea, which will happen after Kim’s assassination.”*

The hackers’ bullying dealt the film company a serious blow, and on top of it, the Koreans promised terrible revenge. In response, the company decided to shelve the film. There will be no movie “The Interview.” So maybe the bombing of Korea won’t take place either. Millions of Koreans will remain alive. Unless Obama makes them show the film anyway.

Yet Hollywood has made and shown a movie about Russians. It’s called “The Equalizer.” That’s what Americans used to call a revolver. “God made man, but [Samuel] Colt made them equal.” In the film, which was shown even on Russian screens under the name “The Great Equalizer,” the steely, proud black man, Denzel Washington, whacks Russians. What a bunch of rats, these Russians! Even hardened American criminals and the like are terrified of them. Prostitution? They’re the pimps. Slavery? They’re the slave traders and slave owners. Corrupt cops? It’s because the Russians forced them into it. Stores going out of business? The Russians have been putting the squeeze on them.

In the Russians’ hide-out in the heart of America sit dozens of women stacking dollar bills, one by one, and then smoothing them over and bundling them. All the money squeezed from simple American folk ends up in Russian hands. And they themselves, these Russians, are covered with tattoos from head to toe. You’ve got stars, the hammer and sickle, even Orthodox crosses. But most of all, swastikas and Nazi symbols, because Russians are racists and Nazis. Their gangster boss is named Pushkin. Yes, specifically Pushkin. For distribution in Russia, they changed his name to Pushkevich, but in the original, it’s Pushkin. It’s the most well-known Russian name and the most beloved name for Russians, so it’s the only name you can give to a Russian villain.

In the office where the Russian villains torture and torment ordinary Americans hangs a Russian icon of the Virgin Mary. These symbols — the icon of the Virgin Mary, Nazi symbols, the tattoos, a lot of dirty money, the terrifying brutality of the ruthless Russians — pass by like a leitmotif. And Pushkin is your everything.

Only don’t think the Russian thugs are freelancers. In one of the film’s final scenes, we are transported together with Denzel Washington to Moscow: To the dome of the Cathedral of Christ the Savior, to the White House with the inscription Government of the Russian Federation [on its facade], and from there to Pushkin’s extravagantly luxurious palace. So Pushkin is a member of the government, if not the president or something like that. But nothing can save him: Denzel kills him and all of his bodyguards and then flies back home, where his colleagues at the CIA are already waiting for him.

As in the case of Korea, it isn’t about art. Hollywood is developing a new image of the Russian enemy. The old ones — stupid and mug-faced Russian assassins from the KGB — weren’t dangerous enough. The idea was suggested by British journalists — the professional Russophobes, Luke Harding and Ed Lucas. They created the image of Russia as a nation of thugs. “Putin [and] his friends … are gangsters on a scale that makes Al Capone or the Corleones seem ­small-time,” writes Max Hastings in The Sunday Times. A columnist from Canadian newspaper The Star summed up the new view of Russia: “There is no atrocity, personal or national, that seems beyond Vladimir Putin and his ‘made men.’ Russia has metastasized into a brutal, autocratic kleptocracy, centered on Putin’s preeminent leadership and in which officials, oligarchs and organized crime bosses are bound together to create a ‘virtual mafia state.’ There is no real borderline between government and organized crime.”

At the center of the new Russian image is “dirty money.” The Russian gangsters in the film “The Equalizer” launder the money. It’s only right to take back such money and rub out the Russians — as Harding urged, and Denzel did. Of course, this terrible image is extremely far from the reality of Russia and of Russians, but it’s dangerous and fraught with megadeath. The authorities, it would seem, understand this. Putin’s team did tremendous work in the fight for a better image of Russia and of Russians — in the hugely expensive Sochi Olympics, in particular. But it’s difficult to compete with Hollywood. Perhaps it’s time to learn from North Korea, even though it’s still not proven that it was the Koreans who dispatched the splendid anonymous hackers who call themselves “Guardians of Peace.”

*Editor’s note: Accurately translated, this original quote could not be verified.

About Jeffrey Fredrich 188 Articles
Jeffrey studied Russian language at Northwestern University and at the Russian State University for the Humanities. He spent one year in Moscow doing independent research as a Fulbright fellow from 2007 to 2008.