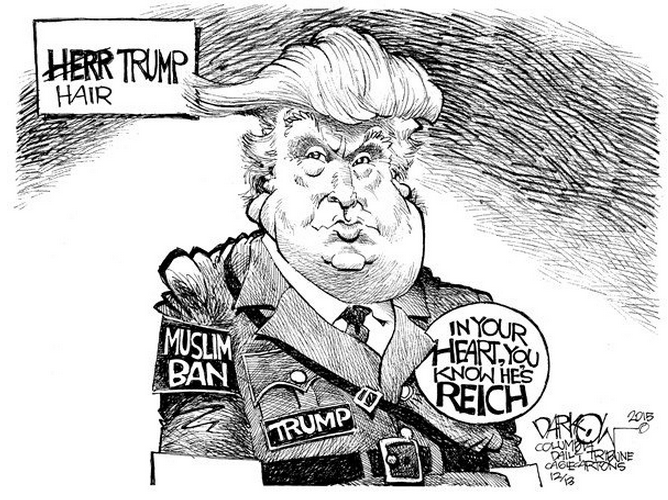 The Republican Party has long been a circle of noteworthy figures. A world of men in navy blue suits and women in modest dresses. An America of fervent patriots with convictions as firm as New Hampshire granite. At least, that’s the glossy image the GOP would like to keep projecting to America and the rest of the world. But now, Donald Trump, with his bad political gymnastics and inexperience, has come to ruin all that. Not that long ago, Republican rallies were meetings of reasonable people around cookies and lukewarm ginger ale. Now, they’ve become vulgar gatherings of crybabies.

This takeover of the GOP by adventurists shouldn’t come as a surprise. The party of Abraham Lincoln and Dwight Eisenhower had been compromised as early as 1964 with the nomination of ultra-conservative Sen. Barry Goldwater as a presidential candidate. A few years later, the implementation of a strategy aimed at taking the “white vote” of the Deep South away from the Democrats would attract politicians and voters of a troubling sort. Nostalgic for racial segregation, these were Christian fundamentalists, gun fanatics and ayatollahs of laissez-faire economics. In 2008, the surge in popularity of Sarah Palin, the populist vice-presidential candidate running alongside John McCain, in combination with the rise of the tea party, signaled the Republican Party’s drastic turn toward irrational and resentful politics. After that, nothing could prevent the emergence of a Donald Trump.

To make matters worse, this change in the Republican Party has revealed some extreme nativist and xenophobic sentiments, which manifest themselves not only in Donald Trump’s attacks on Mexicans and Muslims but also in a resurgence of anti-Semitism.

These past few weeks, Jewish journalists who oppose Trump, like The New York Time’s Jon Weisman, have been directly targeted by hate campaigns on social media sites. The fascists of the internet have even been “amusing themselves” by identifying “Jews” on Twitter and surrounding their names with triple-brackets. This has led many people to put brackets around their own online handles in solidarity with the Jewish community.

Alarmed by this trend, the Anti-Defamation League has set up a team of prominent figures, including Steve Coll, the dean of Columbia University’s School of Journalism, to counter this anti-Semitic offensive. On June 21, The Forward, the venerable Jewish liberal newspaper from New York, suspended its election coverage of Donald Trump in a symbolic gesture meant to draw attention to how the Republican presumptive candidate’s campaign has helped to open the floodgates for this torrent of hate.

Donald Trump’s supporters have responded by stressing his excellent relations with the Jewish community: His daughter Ivanka is married to Jared Kushner, who is an Orthodox Jew and the editor of the New York Observer, and the rich, pro-Israel Sheldon Adelson has also lent Trump his support. However, in liberal Jewish circles, Trump’s campaign is accused of having created a harmful atmosphere that has benefited the most rancid and extreme right-wing nationalists. In the Washington Post, neoconservative intellectual Robert Kagan wrote: “This is how fascism comes to America.”

Even if it hasn’t succeeded in democratically piercing to the heart of a system locked down by the Democrat and Republican parties, the extreme right is a constant in American history, from the KKK to the John Birch Society. In recent years, it has ridden the wave of hostility toward Barack Obama, exploiting the frustrations of a fringe of the white population that feels economically weakened, demographically displaced and culturally threatened.

And now, a new term has entered into political commentary: Alt-Right, or the “alternative right.” This scattering of white supremacists and nationalists has been rejected by the Republican establishment. The National Review, a conservative magazine, even goes as far as to call them “thugs,” but they don’t seem to mind the criticism. Instead, nostalgic for the Southern Confederacy and apartheid-era South Africa, they continue to shamelessly exploit the “public anger” stoked by Donald Trump.

How many are there? Not many, but they are growing more and more numerous according to the Southern Poverty Law Center, which keeps track of extremist movements. Between 2014 and 2015, the number of KKK branches tripled. The number of “hate groups” has risen from 487 in 1999 to 892 last year. The assassin who killed nine people at a black church in Charleston, South Carolina, in June 2015 was also associated with these murderous ideologies, which thrive especially well on the internet and where, protected by the First Amendment, they fuel a bitter network of extremist sites.

This disaster of political discourse extends beyond American borders. The Southern Poverty Law Center notes: “Groups like the Alliance and U.S.-based hate sites like Stormfront.org have had direct and often catastrophic influence on some of the most violent lone-wolf attacks in the U.K. and the European continent.” Norwegian terrorist Anders Behring Breivik, who committed the massacre at Utøya in July 2011, was inspired by these ideas. According to the SPLC, the alleged killer of Labour MP Jo Cox was also a longtime member of these American extremist spaces.

Whether you’re in the United States or in Europe, beneath the “Hi, folks” of extreme right-wing populists hides a “Heil, Volk.”