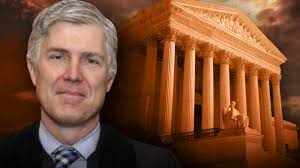 The appointment to the Supreme Court is the first political and non-propaganda move by Trump.

With the nomination of federal Judge Neil Gorsuch to occupy the ninth seat on the U.S. Supreme Court left vacant 11 months ago by the sudden death of Antonin Scalia, President Trump seeks to move from political news and propaganda to history. The executive orders, which he frantically signed from his desk in the Oval Office during his first 11 days, are sensational gestures which have been observed more for their showmanship than for their actual effectiveness. These executive orders can be withdrawn or overturned as easily as they were written, thereby preventing the United States from becoming an absolute monarchy – at least not until Trump.

But the Supreme Court is the governing body that, more than any other, sculpts the debate of American society. A maximum of nine judges sit in the Supreme Court for life, or until they choose to stand down, and are therefore practically immovable. Only two judges in 220 years have been implicated in wrongdoing and only one forced to resign, in 1969, under threat of a criminal conviction. Its judgments, produced by a simple majority, even with a five to four decision, have truly, and not rhetorically, changed history. It was the Supreme Court in 1857 that declared the legitimacy of slavery, thus making the Southern secession and the Civil War inevitable. It was also the Supreme Court that deemed racial segregation unconstitutional. In the case of “Roe v. Wade,” the right to voluntary abortion was recognized, and in 1973, the limits of “executive privilege” were ratified, forcing Richard Nixon to release the tapes containing recordings of his conversations, a decision which shaped Nixon’s destiny. Once again, in 2000, it was the Supreme Court, with a 5-4 decision, that brought Bush to the White House by blocking any further dispute on the presidential election vote.

Gorsuch, Trump’s chosen one, will, if approved by the Senate, be the ninth judge, the man who could upset a Court divided today between “liberal” progressives and conservatives. It will be the vote that decides whether the right to abortion remains constitutionally valid, if marriages between persons of the same sex are legitimate, if euthanasia and assisted suicide are allowable, if campaign finance and candidates must not have limitations. And surely, considering Trump’s temperament and his intrusion, the limits of executive power will once again be debated.

Therefore, at this stage of national life, Neil Gorsuch, a man of the West, son of Colorado, a jurist with unbelievable academic credentials, including a doctorate from Oxford, and an impeccable career, is the person who holds the key to the future of American society and, by extension, many other communities outside its borders.

His story, his writing, his only book, “The Future of Assisted Suicide and Euthanasia,” his rulings, including the condemnation of a portion of Obama’s health care law, say without a doubt that Gorsuch is a conservative, a close observer of the doctrine of “originalism,” which Justice Scalia read as calling for a tighter bond with the original intentions of the authors of the Constitution, without interpretation or further reading.

But he’s not, say scholars of the Supreme Court, a fanatic, an ideologue, and certainly not an improviser like the president who chose him to address the concerns of moderate Republicans who are startled by Trump’s vehemence, disgusted by actions such as the ban against regular travelers with visas and residence permits, and desirous of a conservative turn without imprudent steering.

The choice of the 49-year-old judge of the Court of Appeals – the highest federal appellate court before the Supreme Court – is not a big Trump-like choice, but is very “establishment.” The choice is characterized as one of “moderation,” which Gorsuch, raised in a household that supported Reagan, reflects, and is the first choice made by Trump that is political, not propagandistic or ideological.

Trump acknowledged that his choice has to be approved by Democratic senators, who were still steaming due to the the offense of ignoring Obama’s choice. The Senate will need 60 votes out of 100 to overcome a filibuster (the Republicans have only 52). Gorsuch could be the beginning of the end for the Supreme Court’s social progressivism and the first soft step toward the traditional past.

But there is always the kind of risk that other presidents have run and paid for. When justices swear their allegiance to the Constitution and wear that black robe which they take off only when they choose to, the “Supremes,” as they are called with jocular deference, often undergo an unexpected metamorphosis. Supreme Court justices are actually completely independent, cannot be removed, untouchable, cannot be blackmailed with financial coercion or by the need to be re-elected and are accountable only to history. That has changed them and led them to make decisions very different from those that their sponsor in the White House expect. A kind of secular Pentecost touches them and inspires them. “I will be an independent judge,” Gorsuch said, accepting his nomination by Trump.

And at least the half of America who are terrified of Donald hopes so, because even the worst president can only govern for a maximum of eight years. A 49-year-old judge of the Supreme Court may decide the future of Americans unborn today.