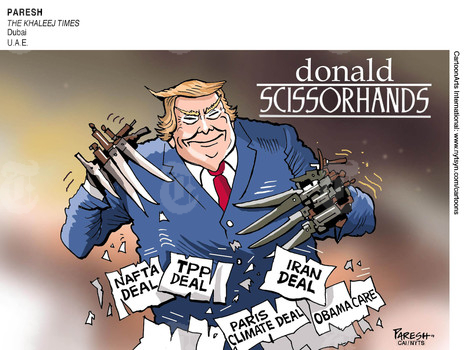 Donald Trump’s policies as president have been characterized by mayhem in all areas of his decision-making, as well as by the absence of viable, constructive alternatives. In the past week, he has accelerated his chaotic policies with a series of actions aimed at making political gains. He signed an executive order making significant cutbacks to the Affordable Care Act, Barack Obama’s health care program, which will affect many people. He announced the withdrawal of the U.S. from UNESCO. He threatened to leave the six-country agreement with Iran to prevent the development of nuclear weapons, a unilateral action by the U.S. that would be impossible for Iran to accept, in the end rejecting the treaty without going so far as to withdraw from it. He signaled a harder line in NAFTA negotiations, with two conditions not possible for the U.S. and Canada to accept. He launched a new barrage of attacks against the media, threatening to pull the licenses of television networks and hardening his hostility to the press in general; in clear violation of freedom of expression as established by the Constitution, he declared that “It’s frankly disgusting the way the press is able to write whatever they want to write.” And to top it off, Trump threatened to withdraw federal support for Puerto Rico at a time when Puerto Ricans on the island, which is a U.S. territory, are faced with massive destruction caused by Hurricane Maria.

No doubt one factor in this acceleration of Trump’s destructive policies through verbal and Twitter aggression has something to do with the fact that approval of his policies continues to fall, but with a new twist: His approval is also beginning to fall among his base. Is he panicking? Does he think he can govern by executive orders in the absence of congressional approval? It also has to do with the frustration of having, up to now, not achieved a single agreement that allows him to sign laws passed by Congress, as well as with serious problems in his administration and in the White House.

Against NAFTA, which he calls the “worst trade deal ever made”: The fourth round of negotiations was preceded by pressure through aggressive, harebrained tweets against NAFTA and in particular against Mexico, threatening U.S. withdrawal. Trump complains about what it has cost the United States, about the trade deficit, but in his ignorance he forgets that NAFTA has created about 14 million jobs, that cancellation would mean the immediate loss of around 5 million jobs in the U.S., and that trade has driven down the prices of many foodstuffs and consumer staples. Trump is trying to drive a wedge between the parties, saying that he has no problem with Canada and would be able to continue the agreement with that country. The two issues rejected by both Mexico and Canada are changes to the rules for denomination of origin, in particular in the auto industry, and the proposed expiration of the treaty only five years from now, at which time it would automatically lapse and everything would be renegotiated, making for periodic uncertainty and creating uncertainty in the long run.

It also highlights opposition to Trump administration proposals by chambers of commerce in Mexico, by the U.S. Chamber of Commerce and by the auto companies, who would see their production chains, which are well integrated across the three countries, broken up. Regarding the rules for denomination of origin, Trump seeks to have 50 percent of auto parts produced in the U.S. In his political ambition, Trump is seeking new bilateral treaties, first with Canada, so he can negotiate favorable terms. The prime minister of Canada, Justin Trudeau, has already had experience with some of Trump’s policies on trade issues, such as the tariffs on lumber.

Destroying the ACA, or Obamacare: In view of the failure, on two occasions, to reach agreements in Congress to put an end to the ACA, Trump signed an executive order to begin the destruction of the health care system created by Obama, without regard for the damage it will cause for the most vulnerable populations. He terminated subsidies that have permitted insurers to cover pre-existing conditions and obligated them to provide care for those who require expensive treatments, like cancer care and drugs. In their place, it will be possible to obtain “garbage” insurance policies that will be paid for by those who get them and will not meet their healthcare needs. He is proposing a major step backwards in terms of taxation – by decree since he hasn’t been able to dismantle Obamacare through congressional action. To change the health insurance dynamic, he will cut off the subsidies that up until now have permitted expanding medical care through nearly total coverage.

U.S. withdrawal from UNESCO: Secretary of State Rex Tillerson announced the U.S. withdrawal from the multilateral organization dedicated to health, education, science and culture. The decision speaks clearly of Trump’s lack of interest in these issues. As an excuse, he cited what he considers to be UNESCO’s positions against Israel – admitting Palestine as a member state, and what are said to be continuing anti-Israel policies within UNESCO. The withdrawal of the United States will be completed in 2018. Until then, it will be a nonmember observer country, without the right to vote, and has a late payment of $550 million that will rise to $600 million in 2018.

Mayhem is the hallmark of President Trump’s policies.